Donald Trump and Hillary Clinton: Who is the lesser between two evils?

Russian experts believe that the upcoming presidential vote in the United States will not improve America's relations with Russia as anti-Russian rhetoric remains predominant in the statements from both Republican and Democrat candidates. It is hard to find at least one US presidential candidate, who would speak in favor of US-Russian cooperation. Hillary Clinton believes that America should take a very tough stance on Russia. Her Republican rival Donald Trump said that he could establish normal relations with President Putin and even said that one should decrease the role of NATO in Europe. At the same time, Trump remains committed to retrieving America's might and greatness. In one of his recent promo videos, Russia was named as one of the main challenges to the United States. 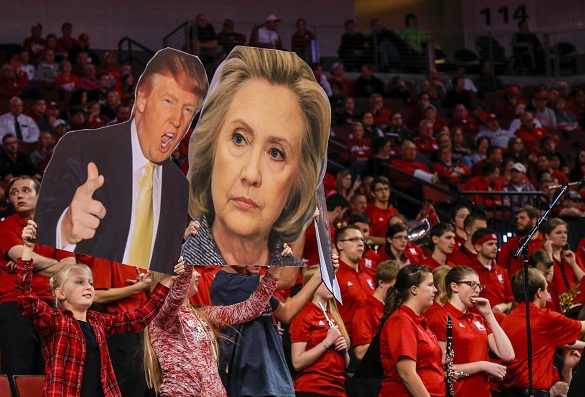 Donald Trump: A glimmer of hope?

Yet, one can see from his statements that Trump understands Putin's stance on many issues and shares respect for the Russian leader. In his most recent statement, Trump said that Vladimir Putin is a "leader" who has " great control over his country."

Speaking about relations with Russia, Donald Trump has the following to say:

When a journalist bluntly attacked Putin, calling him the man who annexed the Crimea, invaded Ukraine and supported Syria's Assad and Iran, Trump dismissed the journalist's insinuations and offered to think about what Obama was doing while serving as President.

Speaking about US foreign policy, Trump remains strongly opposed to the USA's hunger for blood in the Middle East:

"I was totally against the war in Iraq. ...I've always said, shouldn't be there, but if we're going to get out, take the oil ...And we're the only ones, we go in, we spend $3tn, we lose thousands and thousands of lives, and then ... what happens is, we get nothing. You know, it used to be to the victor belong the spoils. Now, there was no victor there, believe me. There was no victor. But I always said: take the oil."

Is Donald Trump the man that America needs to have as President? Can he be the man who changes the USA?

"I've built a great company. I've been all over the world. I've dealt with foreign countries ... I think the main thing is I have great judgment. I have good judgment. I know what's going on. I've called so many of the shots," Trump says about himself and his qualities needed to be the commander-in-chief.

As for Hillary Clinton, let's call a spade a spade. Clinton is bloodthirsty hawk, who sees Russia as an enemy, but Russia sees Clinton as an enemy too. Hillary Clinton accuses Russia of all mortal sins and draws a comparison between Russian President Putin and Adolf Hitler. Below you can find a few quotes that make it all clear.

Hillary Clinton accuses Russia of interfering int the election process in the USA:

"It's almost unthinkable," Mrs. Clinton said on Monday, referring to what she called recent "credible reports about Russian interference in our elections" and citing a hacking of the Democratic National Committee's emails in July.

"We've never had the nominee of one of our major parties urging the Russians to hack," Mrs. Clinton said in a news conference. "I want everyone - Democrat, Republican, Independent - to understand the real threat that this represents."

"If you find a turtle on a fence post, it didn't get there by accident," she told journalists on her new campaign jet. "I think it's quite intriguing that this activity has happened around the time Trump became the nominee."

She accuses Russia of committing cybercrimes against the USA and threatens to resort to a military response to cyberattacks:

"This is like Watergate, only in cyber time," she said. "Breaking into the Democratic National Committee either physically or into electronic files to withdraw information to be used for political purposes, it is stunning that we are facing this and especially from a foreign power." Clinton added that "when Putin was asked about it, he could barely muster the energy to deny it, if any of you saw it.""

"As President, I will make it clear that the United States will treat cyberattacks just like any other attack. We will be ready with serious political, economic, and military responses," she told the attendees, largely made up of veterans and their supporters."

"We are going to invest in protecting our governmental networks and our national infrastructure," she continued. "I want us to lead the world in setting the rules in cyberspace. If America doesn't, others will."

Hillary Clinton wants to have Russia accountable for the crisis in Ukraine. According to her, Russia undermines America's power whenever, wherever:

"Russia's actions in Ukraine and Syria, saying Moscow's objectives were "to stymie, to confront, and to undermine American power whenever and wherever."

"I have been, I remain convinced that we need a concerted effort to really up the costs on Russia and in particular on Putin. I think we have not done enough," she said following a speech on September 9 at the Brookings Institution, a Washington think tank. "I am in the category of people who wanted us to do more in response to the annexation of Crimea and the continuing destabilization of Ukraine."

In 2014, she compared Russia's actions in Ukraine with what Adolf Hitler did during the 1930s:

"Now if this sounds familiar, it's what Hitler did back in the 30s," she said. "All the Germans that were ... the ethnic Germans, the Germans by ancestry who were in places like Czechoslovakia and Romania and other places, Hitler kept saying they're not being treated right. I must go and protect my people and that's what's gotten everybody so nervous."

Speaking of Putin, Hillary Clinton calls him a grand godfather of extreme nationalism:

"The grand godfather of this global brand of extreme nationalism is Russian President Vladmir Putin."

What kind of president does America need?