US media continue discrediting Republican presidential candidate Donald Trump. Russian top officials have expressed positive remarks about Trump, so US media call on people not to vote for Trump because Putin is USA's enemy. 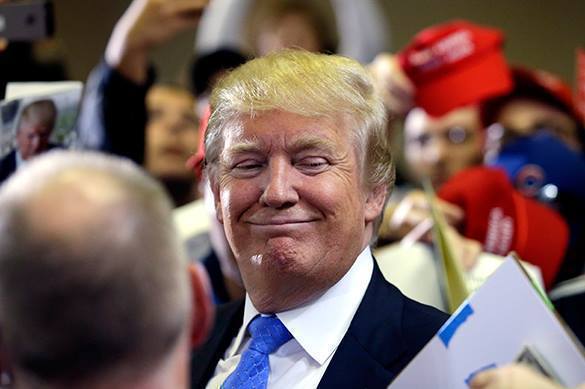 Politico magazine published an article by Anna Nemtsova, a correspondent of Newsweek and Daily Beast in Moscow titled: "Why Russia is rejoicing over Trump." The article starts with quoting Trump's advisor Carter Page, who, speaking in Moscow before students of the Higher School of Economics, stated that the word 'liberal' should be quoted when used in relation to the American liberal democracy. Next, Anna Nemtsova writes that Page used to serve as an adviser to Gazprom before proceeding to another curious fact: Trump removed the paragraph about shipping lethal weapons to Ukraine from the Republican agenda. Thus, we receive a good image of "Putin's friend."

"For Putin, Trump is the gift that keeps on giving. Shunned and sanctioned by Western leaders for Russia's aggression in Ukraine, Putin now sees a future ally riding into view. The Kremlin and its right-wing supporters also enthusiastically applaud the isolationist they see in Trump, who has suggested he might curtail U.S. involvement in NATO and European affairs, and who derides the same political "mainstream" that has deemed Putin a pariah," the author of the article wrote.

Nemtsova also finishes Trump off by saying that in Russia Donald Trump is often compared to Vladimir Zhirinovsky, a notorious politician, who is known in Russia as a "palace jester." This is not actually true to fact, but it appears that Anna Nemtsova can only care less about that.

Next, Anna Nemtsova quotes "Trump's supporter," political analyst Sergei Markov, whom she refers to as a member of rightist pro-Kremlin forces. Speaking at the forum attended by "Trump's fans, including Putinologists," as well as "mild and far-right nationalists, anti-globalists and Donbas separatists," Markov said that "once America elects "the palace jester" Trump as its president, the Kremlin's life will be easier everywhere-in Syria, in Ukraine, in Europe and at home." Even NATO will most likely fall to Putin's feet, Nemtsova writes.

The camp of Trump's fans grows daily, but the popularity of Hillary Clinton does not exceed ten percent, the author of the article concludes. According to her, Donald Trump is "inspiring a new generation of optimism in Russia."

The Russians attach no importance to presidential election in USA

First, the statistics. According to the June opinion poll conducted by the Public Opinion Fund, when asked what outcome of the US elections is advantageous for Russia, 37 percent of Russians said that they found the question difficult to answer. Twenty-six percent of the polled said that the US presidential vote was unimportant for Russia.

According to the nationwide telephone survey conducted on May 28-29, Donald Trump makes a positive impression on only 22 percent of 1,000 Russians, while Hillary Clinton - only 8 percent. As many as 23 and 46 percent of respondents expressed their negative attitude towards Trump and Clinton respectively.

Trump is no "gift" to Putin

The truth is that Russia never expects the US to elect a president that would be "good" for her. Trump is not a "gift" to Putin at all. He will follow the election program that has been recently adopted at the Republican convention in Cleveland.

The program says that the main mistake of the Obama administration was its inability to show tough resistance to Russia. The program also says that Obama weakened control over the World Wide Web. The document describes Russia as a link in the axis of evil that appears to be a problem for America. The authors of the document accuse Moscow of violating the Intermediate-Range Nuclear Forces Treaty and say that Obama's one-sided approach to disarmament has led to the crisis in Ukraine and created a threat from Russia and even China, in light of its steps in the South China Sea. In the section about human rights, Russia is called a repressive country, where one may witness erosion of personal freedoms and basic rights ...

Russia always prefers the lesser of two evils when it comes to presidential elections in the USA. Russia has always been on better terms with Republicans. If Clinton comes, the US-Russian relations will deteriorate. Clinton tends to demonize everything that she hates, and she does hate Russia. Trump is a businessman. "Nothing personal, just business" appears to be a good slogan here.

Russia also knows that one should not overestimate the role of the president in the US foreign policy, where it is Congress and the Supreme Court that play the first  fiddle, not to mention the CIA.

It is an open secret that up to 80 percent of US policy is the work of sponsors and lobbyists - the wealthiest people of America, who prefer not to publicize their activities. They also order articles like the one that we quoted above, because Putin threatens to destroy the plans of multinational companies for the redistribution of property.