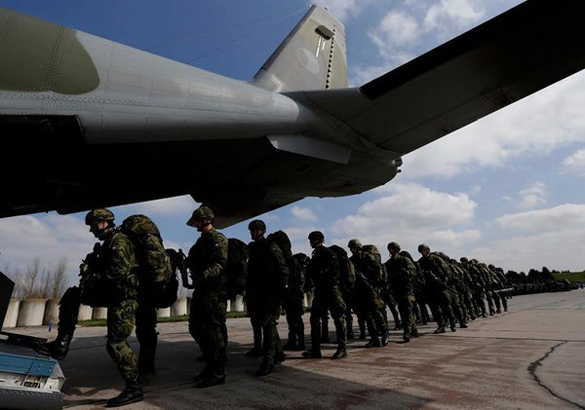 You might think that Americans would want to know just how large the Pentagon's reach is overseas. But you would be wrong. The mainstream US media seldom reports on the numbers and costs of foreign bases and that suits the 'see no evil, hear no evil' public mind-set these days.

Troubling facts always get in the way of Pollyanna propaganda and bought and paid for American "journalists" are not ignorant of this reality.

Better to avoid bringing these unseemly things to light rather than to lie through one's teeth...and get caught as in the pretext for the "war on Iraq to eliminate Saddam's weapons of mass destruction".

Now to the issues at hand. First, let us examine how many overseas bases Russia has. If Wikipedia is to be believed it lists the number of foreign Russian bases at 10. They are primarily in eastern European countries as well as Syria, the Ukraine and Vietnam.

America has at least 75 times that number of overseas bases. According to 2005 Pentagon data, the US owns a total of 737 bases in foreign lands. Adding to the bases inside U.S. territory, the total land area occupied by US military bases is on the order of 2.2 million hectares. That makes the Pentagon one of the largest landowners in the world.

These facilities include a total of 845,441 different buildings and pieces of equipment. Former congressman Ron Paul has said that the US actually has 900 bases in 130 countries about 75% of all nations, so the Pentagon figures might be understating the real numbers. Nonetheless, we do know the size of the US Defense budget was $600 billion in 2015. Compare that to Russia's $81 billion for the same year.

How then is Russia the warmongering bully on the block trying to take over the world?

Decades of constant propaganda by the US, Britain and NATO countries in general never tire of their favorite war-monger mantra: 'Russia as at the door like a wolf'; never mind that America spends 40% of the worldwide total expenditures on defense year after year. Add NATO nations and that figure goes up to 70%. Never mind that America has 10 super aircraft carriers to Russia's 1, and 10 attack mini-carriers to Russia's 0. Never mind that NATO is 27 additional countries.

Interestingly enough, the thirty-eight large and medium-sized American facilities spread around the globe in 2005 (increased since then) -- mostly air and naval bases for US bombers and fleets -- almost exactly equals Britain's thirty-six naval bases and army garrisons at its imperial zenith in 1898.

The Roman Empire at its height in 117 AD required thirty-seven major bases to police its realm from Britannia to Egypt, from Hispania to Armenia. Perhaps the optimum number of major citadels and fortresses, for an imperialist aspiring to dominate the world, is somewhere between thirty-five and forty.

However, when this number is reached the world perks up and notices that the given country has Empire aspirations above all else. The world has so noted America is looking like the Roman Empire these days.

Of course the other boogeyman -- in addition to the ravaging bear that the West has to "worry" about -- is the fire-breathing dragon. True, China has the second largest defense budget in the world, about $200 billion or one-third that of Americas. Not to worry in addition to being allied with the NATO guns the US has the ASEAN alliance to add to its firepower in case of a clash.

The alliance countries, though not officially comparable to NATO, would surely ally themselves with America in case of a clash with China. The combined military budgets of Japan, South Korea, and Taiwan is about $85 billion in 2015. The US has had a major military presence in the first two countries since WWII as well.

In other words, the US and NATO nations combined have bases all along Russia's western border. They spend about 10x what Russia does every year on defense and they have 10x the total firepower and personnel in case of an all-out war. Those are the documented facts. Russia has no bases anywhere near the United States and neither does China.

But the cost of maintaining an Empire eventually caught up with Rome and Britain. America is now $18 trillion in debt and counting. That is largely due to a bloated defense budget and fighting continual wars for 13 years now. The domestic situation is getting more troubled, chaotic and unpredictable as a result. The Other Shoe will eventually drop one day....