Something is wrong with Europe these days. Where are all the European values and adherence to human rights? Where are the vaunted principles of "liberty, equality and brotherhood?" Europe has been having hard times with elementary human values ​​(debauchery rules there). Nazism has been on the rise too thanks to assistance from German Chancellor Merkel. Chairman of the Board of Directors of Pravda.Ru media holding, Vadim Gorshenin, expresses his point of view on the subject. 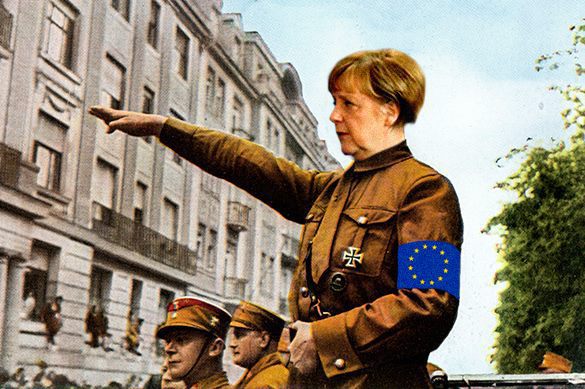 Some researchers say that Hitler was not a pure-blooded Aryan. I would not like to explore that issue, but Angela Merkel is not a purebred Aryan either, although she, like Adolf, would probably like to be one, despite all of her efforts to protect refugees from the Middle East.

Traditions of Vikings and other European vices

In case of refugees, it all seems clear: Angela Merkel tried to solve the problem of the shortage of labor force in Germany. However, she indulged into this game too much, having created a huge problem not only for the country, in which her parents had to change their name from Kazmierczak to Kasner, but for the whole of Europe.

After all, Merkel will go down in history as the main European conductor of Washington's Middle-Eastern schemes that led to the influx of refugees, Turkey's dictate and extortion of money, as well as mass rapes of European women.

Yet, these are all political and geopolitical problems of a woman - a historical loser.

With her actions of an active lesbian rather than of a married woman, (her husband is not present at international meetings, not even as an element of decor), Angela Merkel has trampled on Europe's  educational ideals.

Judge for yourself. In today's Europe, one can take children from their parents (especially from Russian parents), only after one unproven message from envious neighbors. Europe intends to legalize pedophilia in the near future already: it is regarded as a legal method of sexual behavior. Example: A boy finds it very hard to defecate because of violent sex with his father and grandfather, but other people consider this fact a continuation of Viking traditions.

The Baltic region: Greenhouse for Nazism

Even before the influx of migrants from the Middle East, the European Union and its governments considered the existence of "non-citizens" normal. It goes about the people who were born in the countries that joined the EU years later.

Merkel, who is not a purebred German, took office as chancellor with the help of intrigues. Today,  Merkel governs the entire European Union and demonstrates her "Aryan" commitment by looking with favor on Nazism in the Baltic States.

Yesterday, it became known that the authorities of Latvia, a third-rate member of the European Union, may prohibit the Russian-speaking population of the country from giving their children Russian names. Spokespeople for the Ministry of Justice of Latvia believe that such measures will help to protect "the democratic system in the country" and "the right of other residents of Latvia to freely speak their native language."

Do you think this is a matter of Aryan Nazism, is it not?

Do you think this is a demonstration of "Aryan" individuality of those, who humbly look into the mouth of a butch woman, who leads Germany and the "peacefully conquered" European Union?

The logic chain can lead us further, given that Germany is practically and legally a country occupied by the United States.

If we analyze the things that have been happening in the Baltic States, we can say with confidence that Nazism has revived. In Switzerland, for example, a city is ready to pay 300,000 euros not to take immigrants from the Middle East. This suggestion receives serious consideration at top EU agencies. Looks like the revival of the concept of "blue blood," does it not?

Europe can only dream of equality

Under the leadership of Angela Merkel, Europe has been getting more and more Nazi. In this "new Europe," Bulgarian farmers, for example, are not allowed to grow fruits and vegetables in excess of quotas (quotas set by Merkel). In Bulgarian supermarkets, one can find cucumbers, tomatoes and bell peppers (known as 'Bulgarian peppers' in Russia) of German origin.

In Greece, like in Gorbachev's Soviet Union, fruit plantations have been destroyed. In Poland, apple and pear gardens are likely to be destroyed after Russia's counter sanctions. All this is being done in the name of German producers.

Europe should wake up from this nightmare. It is up to European countries to understand what is profitable for them and what is not. Russia should not interfere. One does not need to liberate them  as we have done that before.

The Nazi Ball in 'free' Europe

With a wave of Merkel's Washington-tapped wand, the conquered Europe is ready to violate parents' rights to name their children as they want. One can make a long list of human rights violations that are currently practiced in the supposedly civilized Europe. This is what it means - to follow the Universal Declaration of Human Rights adopted by the United Nations.

We have to recognize one simple thing: Europe and all its state and interstate structures have long been occupied by Washington. Our ancestors did not eradicate Nazism and it has revived. Today, the  "purebred Aryans" (such as the former Kazmierczak, then Kasner and then Merkel) dance their predatory ball in Europe.

Let's look at the final pas of the Europe that considers itself free and independent. It will last for some five or six years.

I do not fully agree with the Russian Foreign Ministry about US missile defenses and everything else: the question is not so much about opposition to Russia, but more about the military contingent, ready to defend Washington's interests in the occupied European territory. Including, perhaps, for the suppression of internal protests in the occupied countries.

If Russia uses the reserves that she has, she does not need to make herself dependent on the lifting or no lifting of EU sanctions. Russia's counter-sections against Europe should not depend on when the anti-Russian sanctions are lifted. Our sanctions should depend on when Europe stops violating human rights, such as those associated with the decision of the Latvian government to prohibit giving Russian names to Russian children.