US troops in Europe to outnumber all European troops combined

The Americans are planning the largest increase of their military presence in Eastern Europe since the Cold War. The Pentagon announced plans to deploy a tank brigade in Europe in February 2017. Why not immediately, especially against the backdrop of the "Russian aggression?" As a matter of fact, there is no aggression. Instead, the United States occupies Europe. 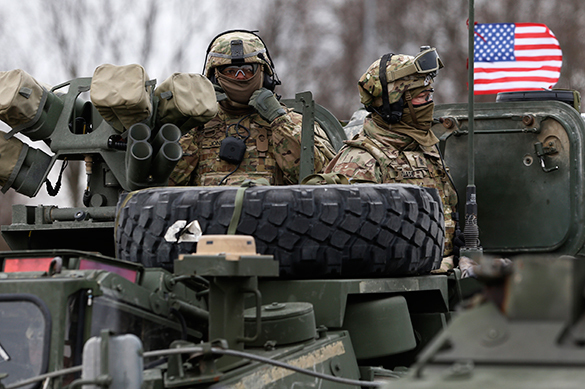 Not that long ago, Pentagon officials announced plans to deploy 4,000 troops, 250 tanks and Bradley armored vehicles, self-propelled howitzers and 1,700 pieces of other wheeled vehicles and trucks in Eastern Europe.

In an interview with The Wall Street Journal, US Deputy Secretary of Defense Robert Wark said that many countries of Eastern Europe questioned the readiness of the United States to protect them, especially against the background of the "Russian aggression." The above-mentioned measures were taken to prove otherwise.

A report from the European Command of the US Armed Forces said that the total number of US troops in Europe would thus be equal to three brigades. This contingent will be shared between  Poland, Lithuania, Latvia, Estonia, Romania and Bulgaria. American people and equipment will be present in each of these countries, Gen. Ben Hodges said.

According to The National Interest, NATO's growing presence in the Baltic States - the most likely flashpoint for a confrontation with Russia - will demonstrate NATO's determination to protect its members. However, it turns out that the tank brigade will not be deployed in Eastern Europe under the aegis of NATO. The move will be made as part of the US program titled European Reassurance Initiative. The $3.4-billion program requires approval from Congress to become reality.

Secondly, who is the aggressor? Is Russia building its bases near the USA to protect Cuba, Mexico, Venezuela and other countries? Does Russia need to give way to "peace loving" initiatives of the North Atlantic Alliance? Does Russia's military doctrine mention anything about a preemptive nuclear strike? No other country has started so many bloody conflicts all over the world. There is also a very nice American tradition to betray allies, should something go contrary to plans.

The Americans prefer to bomb someone and see what happens. They will not die for Europe. The main concern is the Russian-German alliance that targets Asia. Yet, it is possible to end this initiative by bribing politicians and spreading adequate propaganda.

Thirdly, if the threat of the Russian aggression is as serious as it is painted, why not increase the military presence immediately? Why does the USA want the unlucky Balts, Poles, Romanians and Bulgarians tremble with fear for nearly a whole year? Is the Russian aggression an imaginary threat? Why send tanks to Europe if a nuclear conflict could destroy them in minutes?

As for Europe, it is not just dependent on the United States - it is occupied by the United States. The occupation is based on principles of the Roman Empire: the Romans used military garrisons to contain local population should they rebel against Rome's exploitative and predatory policy.

What if a country of Eastern Europe decides to re-engage with Russia despite the Transatlantic Pact and sanctions? That would be a reason to use American military garrisons. Nobody will dare to utter a word, because US troops in Europe will soon outnumber all European troops combined. With the help of US troops, Poland, Bulgaria and others of the ilk will have the honor to die first in the much-talked about nuclear war.

Russia has no territorial or other claims to Europe. However, moving troops to its borders without a good reason for it is a very dangerous game. Russia will not repeat the experience of 1941. Russia will take necessary security measures in response to NATO's growing military presence in Europe, especially in the eastern part of the continent, Alexander Grushko, Russia's Ambassador to NATO said. Moscow's reaction to such a move will be adequately efficient, he added.

The USA never sends its troops to places where it smells war - it evacuates them from such places instead. For example, We have recently seen the evacuation of NATO's troops from Turkey, a NATO member.

"The Americans do not want to get involved in a real war. They do not want to mess with North Korea, - Eduard Limonov, writer and political activist told Pravda.Ru. - Donald Trump says that it is about time the Americans should stop protecting all for free. The Americans have a plethora of their own problems: a huge public debt, high unemployment, and the situation is getting worse. Instead, they spend enormous money on other countries. This will stop soon. The Americans will return to their North America, and their interference in global affairs will decrease."