Erdogan turns Turkey into zone of instability and dictatorship

Turkish President Recep Erdogan expressed his insubordination to the Turkish Constitutional Court. Will Erdogan eliminate those who disagree with him? He is confidently taking his country to destruction. 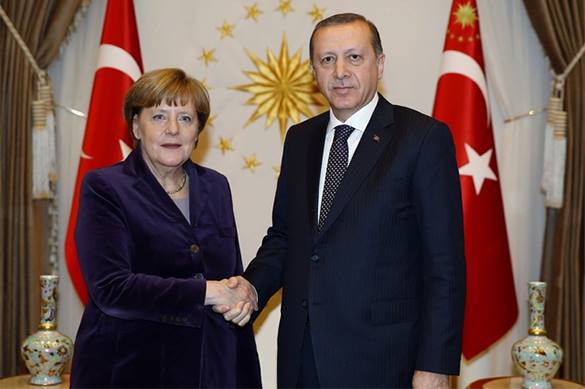 Chief editor of the Turkish newspaper Cumhuriyet, Gian Dündar, and journalist Erdem Gul published an article that proved Turkey's participation in arms supplies to ISIL in Syria. The shipments of arms were conducted in January 2014 and were exposed during inspections of the trucks of Turkish security forces on their way to the Turkish-Syrian border.

Erdogan assessed the journalistic investigation as an act of espionage that was committed to undermine Turkey's international image. Erdogan promised that Dündar would have to pay "a high price" for the report.

The journalists were arrested and kept in prison for three months. Turkey's Constitutional Court ruled that, in accordance with Articles 19, 26 and 28 of the Turkish Constitution, the rights of citizens Dündar and Gul to liberty and security were violated.

"I do not respect to the ruling. I'm not going to abide by it. The [14th Istanbul Criminal] Court could have insisted on its original ruling [when it arrested the journalists] and avoided the Constitutional Court's ruling. Then they [Dündar and Gül] would have been able to go to the European Court of Human Rights. This whole process is not right at all," Erdogan said.

The above statement exposes Erdogan as a dangerous dictator.

The Constitutional Court is the supreme judicial authority of Turkey that remains outside Erdogan's power. Most of the judges were appointed during the time of Erdogan's predecessors.

"The president can not ignore the Constitution. If he says such things, it clearly implies that he does not respect the current constitutional order in the country either. He also encourages people not to respect the Constitution and judicial decisions," deputy chairman of the main opposition Republican People's party (CHP) Sezgin Tanrikulu told todayszaman.com.

The two journalists were released from prison, but they are still awaiting trial. The indictment stipulates for life imprisonment and 30 years of imprisonment on charges of espionage and assistance to the armed terrorist organization.

Interestingly, we do not hear the Western media defending the Turkish journalists. The EU's Foreign Policy Office welcomed the ruling of the Turkish court as a necessary step in the right direction to guarantee freedom of speech in Turkey. Simple as that. Neither EU nor US officials have commented on the reaction from the Turkish President.

In the West, democracy is just a word

Does that seem to be surprising? Not at all. In the West, democracy is just a word. How can Western leaders criticize a member of the US-led coalition against ISIL? This would mean that the whole coalition works for ISIL. How can they criticize a NATO member? NATO's reputation has been tarnished by its operations in the Middle East. Yet, the US could put pressure on Recep Erdogan by targeting his son's business. Prosecutors of the Italian city of Bologna suspect "Daesh oil minister" Bilal Erdogan of money laundering. The Americans do have an opportunity to put financial pressure on Erdogan, but they are not doing it. How so?

Dündar said that the EU is betraying its democratic values to be closer to the Turkish president in a hope that Erdogan will be able to stop the flow of refugees to Europe. If one needs to violate human rights for this objective - this is not a problem at all.

"We have always looked up to the EU as a model to improve democracy, but not dictatorship in Turkey, - the journalist said. - Now, we can see the EU turning a blind eye on violations of the norm of democracy in Turkey. The EU betrays its principles for the sake of short-term interests."

Are there any democratic values in the European Union at all? The moral decline of Europe has been a piece of grim reality lately.

"There is a civil war with the Kurds unfolding in the south-east of Turkey, - Vladimir Avatkov, Turkologist, Director of the Center of Oriental Studies, international relations and public diplomacy told Pravda.Ru. - The Turkish Republic is using military hardware to destroy them. It appears that the Kurds are trying to find their place in the new Constitution given the fact that Turkey will hold a constitutional reform soon.

"However, the Turkish authorities made it clear that there would be no autonomy and no federal system. Erdogan became an independent figure and started running aggressive foreign policies that may not suit the West because his policy can be unpredictable. The US supported the ceasefire in Syria, having thus sent a clear message to Turkey not to interfere in the affairs of other states and peoples. Turkey has been turning into the zone of instability," the expert told Pravda.Ru.