To what extent is the European unity accomplished in being a unity? 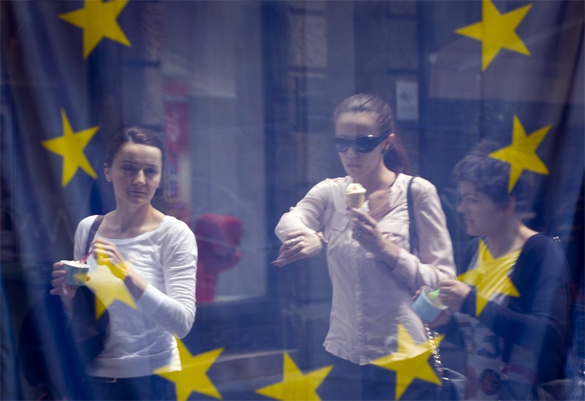 With the Maastricht Treaty  which the EU  declared in 1993, 12 countries became a political unity with the objective of uniting the peoples of Europe and resolving common problems. The common Constitution, common currency, central executive and legislative organs reinforced this unity. Through the fourth EU enlargement, Austria, Sweden and Finland joined the Union. Through the fifth, sixth and seventh expansions, the former Eastern Bloc countries also joined the EU. The EU became one of the notable powers of the world with the 28 member-states amounting to a population of 500 million people and an economy that reaches 20 trillion dollars.

However this political union of the EU with its giant material power could not be duly supported by a social and cultural solidarity. A common chain of values which embraces all the peoples of the EU and integrate them could not be established. Steps that would increase the general welfare, peace and happiness of the European communities and allow them all to enjoy justice and equality could not be taken.

One of the most important reasons underlying this deficiency has been the ongoing conflict between the two main blocs since the establishment of the unity. These blocs are the continental Europe led by France and Germany and the coastal Europe led by England and Italy. During the economic crisis of 2008, this disunity and conflict within the union became magnified when Italy, Spain, Portugal and Greece came on the verge of  financial collapse.

During the same period of crisis, Germany -  the leader of Europe - came to the forefront with its strong economy had the most leverage influencing much of the entire EU political discourse and action. As a result, the EU has morphed into a structure made up of unequal states with enormous differences in power, wealth and levels of welfare.

However, the main objective of a union should be  that its individual states should work together in harmony and coordination, so that resources can be properly allocated, deficiencies could be addressed, responsibilities fairly shared so as to make the entire union a strong one. The recent state of the EU countries, on the other hand, shows that to a great extent, there is a departure from this rationale of unity. In a structure where some have attained superiority, others have undertaken all the sacrifices and responsibilities and still some others only pursue some interests and opportunities, it is no longer meaningful to talk about unity.

Another important element of the concept of unity is a strong central decision making mechanism that will make the entire union act in line with common principles. This central authority must have the authority to make all the obligatory and important decisions while implementing sanctions crucial to the survival of the union .When countries pursue their own national interests, self-ordained and independent policies, such a scattered structure would take a heavy toll on the the idea of European unity. From this perspective, the EU's executive and judicial systems are far off from having the power and authority in question.

The EU's executive cadres  -  in a manner almost reminiscent  to the aristocracy of the 19th Century - have assumed  an elitist appearance quite detached from the public which weakens the feelings of adopting and protecting a central decision making authority within the EU community. Negative images such as  internal strife and separation among the executives also do further harm to the reliability of the concept of  central authority. However  a policy that accentuates love, peace, integrity and brotherhood of the European peoples can easily resolve this problem of authority.

The reason why the refugee crisis  has turned into a hornet's nest is again this lack of system. Today, in the middle of the European continent, tens of thousands of desperate infants, children,  women and elderly refugees struggle to survive in the approaching winter under cold desperate conditions. While the European countries and their executives certainly have the capability to save these innocent people, they are unable to arrive at   a joint decision and implement it.

The refugee problem is only a technical problem with a very simple solution. With its limited resources, even Turkey hosts more than two million refugees. The tent cities have transformed into camps while camps have transformed into full-fledged cities. On the other hand, you  hear 28 distinct voices from 28 EU countries regarding this simple issue. They haven't been able to put forward a solution or plan upon which they can agree.

The sole and "greatest solution" worked up by the EU countries is sending the refugees coming into Europe back to Turkey. Angela Merkel, the Chancellor of Germany, demands Turkey  stop  the refugees from entering Europe. However application of this demand is against both the core philosophies of the EU and the 1951 UN Refugees Status law signed in Geneva  together with the UN Declaration of Human Rights  signed in 1948.

The minutes of the meeting of the UN Interior Ministers and Ministers of Justice held on November  10th once again displays the weakness in central decision-making and the power of sanctions. In this meeting, the Minister of Foreign Affairs of Luxemburg, Jean Asellborn asked that the 160,000  refugees - who have the right to asylum in EU countries - be  urgently redistributed while Sweden is asking for help from the EU to send the refugees to other countries. In the same meeting, the German authorities criticized Italy and Greece on their failure to activate the Hotspot, which is a common refugee recording system. The target of Austria, on the other hand, was Greece; she accused the country for not being able to protect its borders with Turkey. The agenda of France is to urgently send the refugees who are not eligible to gain the status of asylum-seekers back to their countries. The reaction of Asellborn to the threat of Germany and Sweden about closing their borders must be assumed by all the EU members as self-criticism. Asellborn said that effort must be put forth not to lose the culture of humanity which is one of the fundamental principles of the EU.

The refugee crisis is quite important and it may be the last opportunity for the EU to recognize its deficiencies and the internal problems it has and resolve them as soon as possible. Against the danger of wasting more than a half a century worth of effort for unity, all the EU countries must take this warning into consideration. There is absolutely a need for an EU that pays attention to the problems of the entire world, runs to the aid of the downtrodden and generates solutions, and not one which struggles with its own problems. There is definitely a need for an EU which advocates justice, peace, love and brotherhood.