American democracy: Anyone can kill

US President Barack Obama has called the killing of 14 people in San Bernardino, California, a "new phase of terror." Carefully avoiding the phrase "radical Islamism" and not offering anything new in the fight against the Islamic State, the US president said that the US will overcome the threat because "freedom is more powerful than fear." 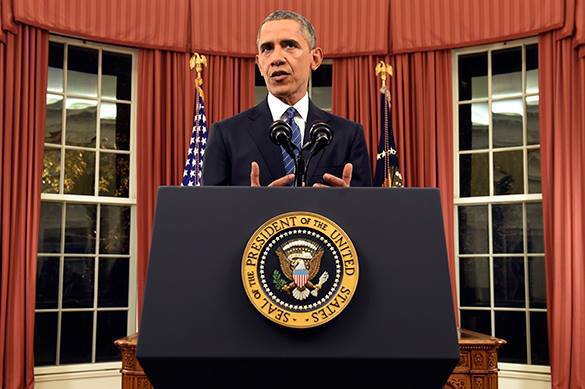 "Let's make sure we never forget what makes us exceptional. Let's not forget that freedom is more powerful than fear. That we have always met challenges, whether war or depression, natural disasters or terrorist attacks, by coming together around our common ideals as one nation and one people," Obama stated in his televised Oval Office address on Sunday.

The US president is not very good with cause-and-effect relationships. Fear is a consequence of the freedom that Washington promotes. This freedom can be described as follows: "I do what I want, and I don't care what happens afterwards - I'll survive the deluge, on a safe island."

Fear comes from shortage of confidence. This fear is a consequence of memories of the recent past. What does Washington has in its recent past? Afghanistan, Iraq, Libya, Syria, where there is war, famine and devastation.

The last time, when Obama addressed the nation from the Oval Office, was five years ago, when he announced his intention to withdraw US forces from Iraq. Yesterday's address emphasized the importance of the tragic events in America. Last Wednesday, Syed Rizwan Farook and his wife Tashfeen Malik, armed with two rifles and two pistols, killed 14 people and wounded 21 in San Bernardino. Both of them were shot to death by police hours after they escaped from the crime scene. The FBI said it was a terrorist attack, although there was no specific connection found with the Islamic State.

The killings in San Bernardino marked a "new phase" of terror, Obama said. According to the White House, extremists have become more secretive and thus more dangerous. This year, the FBI arrested has 56 of such "secretive and dangerous" individuals, according to US media.

The US president said that terrorists use encrypted applications, software, social media and the Internet to urge their followers to commit terrorist attacks in their home countries. Pakistani national Farook and his wife from Saudi Arabia were two of such followers.

However, the US president offered nothing new in response to the new terrorist tactics. Obama did  not encourage his people, but called them to get ready for a long fight.

"We will continue to provide training and equipment to tens of thousands of Iraqi and Syrian forces fighting ISIL on the ground so that we take away their safe havens. In both countries, we're deploying special operations forces who can accelerate that offensive. We've stepped up this effort since the attacks in Paris, and will continue to invest more in approaches that are working on the ground. Third, we're working with friends and allies to stop ISIL's operations, to disrupt plots, cut off their financing, and prevent them from recruiting more fighters," Obama said in his speech.

ISIL is already in USA

Obama also called on Congress to pass a few legislative acts - to cancel the "fiancee visa" on which Tafsheen Malik entered the USA, and ban the sale of weapons to those who are banned from flying airplanes. Yet, one can buy weapons on the Internet, bypassing any permission. The right to keep and bear arms is a basis of the American democracy: anyone can kill.

Every 100 Americans have 112 units of weapons, regardless of their age. On this indicator, the US goes ahead of Yemen, where there is no gun control at all.

"Is that all there is? We need a new President - FAST!" Republican candidates for president, Donald Trump, tweeted commenting on Obama's speech.

Obama is weak in the fight against terrorism

Many people come to the United States using the visa waiver program. Those people avoid inspections, many checks and searches. In the US, there are more than 1,100 extremist organizations officially. Many of those organizations work on the Internet.

"Obama only pretends that he is struggling against the Islamic State. Russia took real effort to step into this fight and she is staying at the forefront of the fight, - Yuri Glushchenko, a leading expert at the Russian Institute of Strategic Studies (RISI) told Pravda.Ru. - Everyone in the West understand this. Turkey's provocation against our Su-24 plane was an attempt to shatter the united front of Russia and Europe against the Islamic State."