Peace, Democracy and Human Rights in the EU

In 2012, the EU was awarded the Nobel Peace Prize for contributing to the "advancement of peace and reconciliation, democracy and human rights." When the trio of EU top rogues showed up in Oslo to pick up the check, their vapid smirks somehow betrayed their true feelings. Herman van Rompuy and José Manuel Barroso have since been thrown on the dungheap of European history, Martin Schulz will join them shortly. They knew perfectly well the EU did not even remotely deserve the prize. They also knew that personally, they were unworthy of it. The prize may have been awarded on dubious grounds then, but today the EU would be definitely unworthy of it. Looking back now on the 2012 ceremony at Oslo, we can say the Nobel Prize was the kiss of death for the EU (like in 2009 it was the kiss of death for Barack Obama, who subsequently proved to be just another trigger happy emperor). 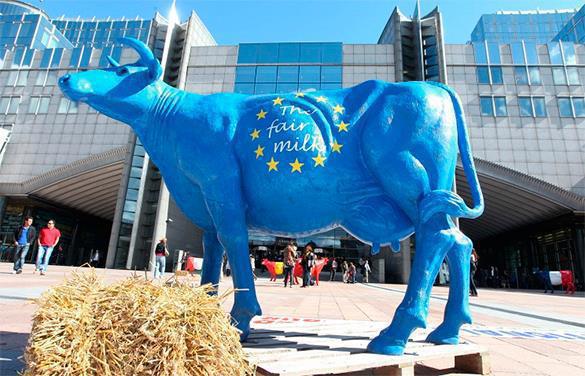 One should ask the 23.000 citizens of the German town of Ellwangen about the EU's advancement of peace now that 4.500 "refugees" have been dumped in their midst. The people of Ellwangen no longer dare to go out for fear of getting raped, mugged and beaten up by the largely young, male, Muslim "refugees". Even church services are being disrupted by "refugees" who do as they please. These "refugees" show their appreciation by defecating all over the place, in private gardens, public parks, sidewalks, anywhere.

The EU does not care, nor does the German government or the government of any other country opening its doors to "refugees."

One should ask the residents of countless small towns, villages and hamlets all over Western Europe, that are being outnumbered by aggressive "refugees" who refuse to pay for whatever they take from store shelves. Austrian women have been buying up all the shotguns in the country, terrified as they are of rape by Muslim "refugees." In Germany, pepper spray is currently unavailable because of massive sales to terrified Germans living in isolated places that the police can no longer protect. How about the human rights of these native Europeans?

Obviously, the EU does not give a damn.

In 2014, the Dutch government ordered 140.000 citizens to be taken hostage and thrown in jail for up to ten days for not being able to pay exorbitant speeding tickets. When they get out, sometimes after losing their jobs in the process, these people still have to pay the tickets, that have been tripled or quadrupled in the meantime. Human rights, anyone?

Ah, and then the delicate subject of democracy. One should ask the French and Dutch how they feel about the EU ignoring their referendums in 2005. Both the Dutch and the French massively rejected the "Lisbon Treaty" that was rammed through notwithstanding. The other European nations weren't even asked about the infamous Treaty. For the EU, democracy is only accepted when voters give the proper answer.

And how democratic are the negotiations for TTIP, the treaty that will chain Europe to the bloodthirsty US empire? In the day and age of "transparency," the negotiations are carried out by governments and representatives of big corporations. There is no oversight whatsoever from the sham organization that goes under the name of European Parliament. The text of TTIP is so secret that not even members of the German Bundestag are allowed to see it. The document is kept in a safe in the US embassy at Berlin. Meanwhile, hundreds of thousands of worried Germans, Belgians, Frenchmen, Italians and other Europeans regularly take to the streets in big demonstrations against TTIP. On the basis of what is known of TTP, its Pacific counterpart, one thing is certain: TTIP will give almost absolute power to big corporations that place profits above the public interest and that are expert at socializing expenses. In other words, TTIP will seal the fate of what little there still remains of democracy.

It is plainly evident that the EU is an abysmal failure in all its endeavors. The only thing for which it deserves praise, the free movement of people and goods across internal European borders, is now in danger of being thrown overboard as a result of the "refugee" crisis.

Human rights, democracy, peace, these are all hollow words. The more often, it seems yjey are used by EU officials and authorities, the less they come to mean. Non one in the Eurocracy cares. No one. Not even the food safety authority EFSA, that is frantically trying to keep the European market open for the carcinogenic poisons (Roundup!)marketed by evil companies such as Monsanto. No wonder, since EFSA is staffed by industry-connected "scientists" and "experts."

It now seems the EU is the most massive swindle in history. Never before have so many people (500 million) been conned for such a long time by such a ruthless band of rather mediocre con artists. What may have started back in 1957 as an honest attempt to make Europe safe, prosperous and democratic, has turned into a tragic farce of giant proportions. With an unelected head of government (Jean Claude Juncker) and an unelected President (Donald Tusk). So much for democracy!

Advancement of peace and reconciliation, democracy and human rights, wasn't it? Well, maybe these were indeed advanced over the past 60 years.

By an inch or two.