Can Russia and Ukraine be together again, as they were in Soviet times?

Ukraine is taking every effort to strike its Soviet and communist past out from history. Soviet symbols - hammer and sickle, coats of arms - get vehemently destroyed in the country. When did the process start and who initiated it? Pravda.Ru conducted an interview on the subject with Ukrainian sociologist Yevgeny Kopatko. 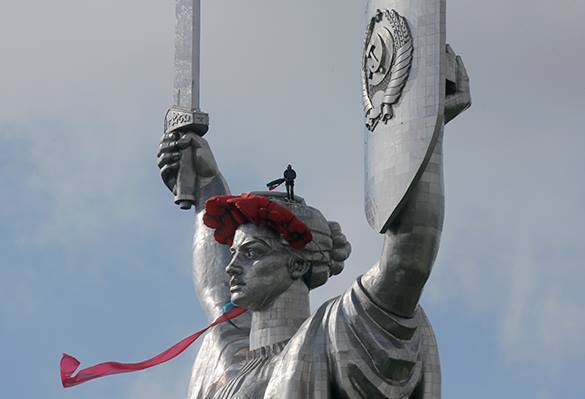 "During the celebration of Ukraine's liberation from Nazis, some politicians in Kiev said that it was the Soviet occupation that had replaced the fascist one. Some even said that it would have been better for Nazis to stay. How can one explain such statements from the point of view of common sense?"

"Such things are in no way connected with common sense. This year, we conducted a survey regarding the Victory Day, and we found that for the vast majority of citizens of Ukraine Victory Day was a landmark holiday

"However, the logical, historical and mental perception of the war, of the victims of that war, has been interrupted. The process to rewrite history started long before Maidan riots. The process started during the last years of the Soviet Union.

"Why did this happen? When you do not read primary sources and ignore even secondary ones, when you can reach only tertiary and quaternary sources, you change your outlook of the past. This fight has taken tough and even grotesque forms in today's Ukraine. At the same time, the result of this fight is clear: if you're not doing your history, someone else will do it for you. If a  country does not remember its past, it can not build a future."

"Will Ukraine reach the point when it opens a museum of Soviet occupation, as it happened in Georgia?"

"I think that Ukraine has come to this already. Ukraine has gone even father than Georgia. The Georgians value their history, they are very much proud of it. In Ukraine, people destroy Soviet symbols along with their motherland. They destroy the history of the Great Patriotic War. Soviet symbols used to be perceived as symbols of the great national tragedy. Today, everything is different. We used to believe for many years that Russians and Ukrainians were two brotherly nations. Yet, Maidan and the civil war broke our beliefs of the past into pieces.

For some people, a monument to Lenin is a symbol of history. In today's Ukraine, they demolish monuments to Lenin, even though a lot of people in Ukraine do not want those symbols to be removed. Yet, the minority that seized power in Ukraine dictate the agenda.

"EU Ambassador to Ukraine Jan Tombinski made a very harsh statement and literally demanded that the Prosecutor General of Ukraine should replace four prosecutors. US Vice President Biden arrives and sits at the head of the table in the Ukrainian Parliament, the Verkhovna Rada. US Ambassador Jeffrey Payette goes to polling stations at elections and personally checks something there. Why do the Ukrainians find this acceptable?"

"The people in power are very loyal to representatives of Western countries. I respect the Americans, but one does not need to worship them."

"Has the Ukrainian consciousness changed over the past year or two?"

"The Ukrainians have changed their attitude to the leaders of the country - Prime Minister Yatsenyuk and President Poroshenko. Back in February of this year, their ratings were very high - they were 57 percent positive for both of them. Today, Yatsenyuk's rating is 78 percent negative. Neither Yatsenyuk, nor Poroshenko have the positive-negative balance. The Ukrainians do not have a national leader who would be capable of uniting the country."

"The Ukrainian Prime Minister has earned his first billion. The question is what earned him that."

"I have no comment for that. The situation in such fields as corruption, human rights and freedom of speech has become worse. Some even acknowledge that life was better when Yanukovych was in power.

"The worst thing that happened is the split between Russia and Ukraine. Inside the country, Russia has lost a huge number of loyal people. In eastern Ukraine, it was predominantly Russian-speaking people fighting against Russian-speaking people. The level of hatred for Russia is still high, but the society is tired of that."