The political split of the European Union will take place because of the refugees. France is the weak link at this point. Nicolas Sarkozy and Marine Le Pen won regional elections in March of this year. Most likely, the governments of Eastern European countries will support the French. 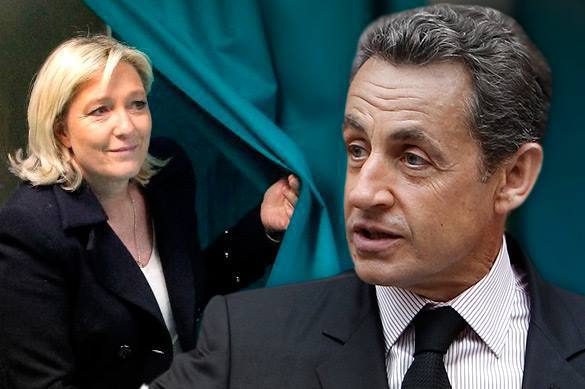 Sarkozy's success at the elections in March may herald his return to big politics. In France, almost no one doubts that Nicolas Sarkozy (Republicans) will run for president in 2017. Marine Le Pen of the National Front has all chances to win the missing votes in order to successfully pass this test as well.

Socialists will remain on the sidelines of the political struggle, because their leader Francois Hollande can not solve the main problem of France - the uncontrolled inflow of migrants.

On September 10, Nicolas Sarkozy said in an interview with Le Figaro newspaper that the French society may disintegrate because of migrants. Hollande has lost control over the state of affairs in  in European politics that, in fact, does not actually exist, the former president of France said. According to Sarkozy, there is no more union between Germany and France that used to be the driving force of European politics.

As for the refugees crisis, Sarkozy suggested keeping them in guarded holding centers in peripheral countries of the Schengen agreement and address the issue individually.

Of course, such filtration camps come contrary to the tolerance policy of Brussels, but, according to Sarkozy, this is not a question of "ideological choice." "This is just a wish to take account of reality, because if we are not careful, then the risk of the break up of the French nation will increase to then become inevitable. Then it will be too late to shed crocodile tears," Nicolas Sarkozy said.

The National Front leader Marine Le Pen criticizes not only Brussels but also Berlin. "Not only Germany is eager to manipulate our economy, but it also wants to force us to take hundreds of thousands of refugees," said Le Pen, speaking to party members in Marseille, on September 6. She added that France had neither the means nor the desire to open its doors to refugees.

"What is 'tolerance?' What does it mean?" asked Le Pen. "I am very tolerant and hospitable, just like you. But would you want to take 12 illegal immigrants in your apartment? You would not!" she said.

The National Front won elections to the European Parliament last year and a few seats in the municipal elections in 2014. A recent poll showed that 30 percent of young people between 18 and 24 years of age would definitely vote for the National Front. "We are neither left nor right - we are a French party," said Le Pen.

Many European parties, which Brussels labels far-right and nationalist organizations, can say the same about themselves. They disagree with the ideas of European integration, trans-Atlantic cooperation and ideology of "tolerance" to various minorities. The Austrian Freedom Party (FPÖ) and the Hungarian Jobbik are among such organizations. There is also Belgian Vlaams Belang (VB), Bulgarian Attack, the National Democratic Party of Germany (NPD), the Golden Dawn in Greece, the Northern League (Lega Nord) in Italy and Order and Justice party (TT) in Lithuania.

About one-fifth of European MPs adhere to this political line. This is not enough to show serious influence on voting, but the situation may change dramatically after the next elections to the European Parliament.

In several years, France may become the leader of the new European Union to conduct US-independent policies. Sarkozy already says that the US can not handle global leadership, including the issue of migration. In his view, the shortage of international leadership in the refugee crisis is scary and dangerous. Sarkozy already knows that the governments of Eastern European countries - such as Estonia, Slovakia, Czech Republic and Hungary - refuse to accept Muslim refugees.

For the time being, Brussels has distributed only 30 of 60 thousand applications, and the question has stalled. The political crisis is very close. It has already materialized in the UK. Tories had to call a referendum on the country's membership in the EU because of the pressure of the United Kingdom Independence Party (UKIP) that put forward an ultimatum: either a referendum or no coalition at all.

Why is it important to Russia? Taking an anti-American position, the forces that we mentioned above, unwittingly help Russia. Yet, the referendum in the UK is most likely a concession to the general public to close the issue of EU membership once and for all. Cameron will present the results of the referendum to Euroskeptics, at which people will vote against the pull out of the UK from the European Union. As for Sarkozy, he voices reasonable ideas now. He speaks about the need to end the international pressure on Russia. However, everything may change when he comes to power. If he takes office as French president, he may change his mind quickly and check his every step with Washington.

Greece is a good example at this point. Greek Prime Tsipras used to talk about the pull out from NATO, but then ended up with bowing his head to Schäuble.

Empires collapse as they fall apart from within, being unable to settle internal contradictions. The current refugee crisis in Europe is one of such contradictions. Empires are never eternal. The US empire is not eternal either. Some day, it will fall apart against the backdrop of free migration.