If North Korea strikes, the West will shudder

The Asian stock indices collapsed after the North Korean leader Kim Jong-un ordered to put army on war footing. He also promised to wage war in the nearest future, unless South Korea dismantles loudspeakers, which it uses to broadcast propaganda on the border with the North and incline soldiers to desertion. Is Pyongyang really worried only over this? What is at the bottom of the conflict? 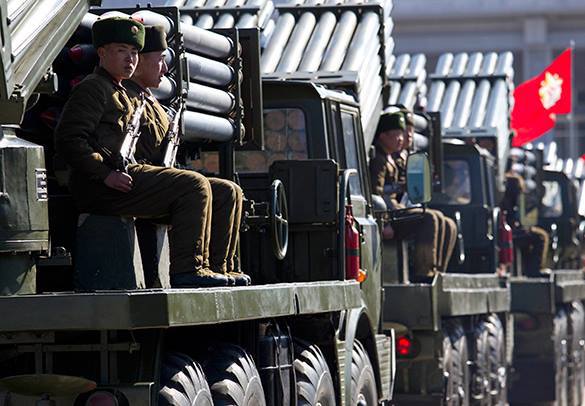 The military operation should have been started on 21 August. The conflict intensified after the North Korean army shelled the loudspeakers in the border area.

South Korea responded with 155 mm caliber shell shooting. As the Western media reports, South Korea restarted its anti-North Korean propaganda after August 4, when two South Korean military men were blown up by a land mine in the demilitarized zone.

Some Western resources got encouraged with the situation to such extent, that carry out online reports. In South Korea everything is strained to the bitter end. Thus, a 23-year-old man was arrested after sending messages to his friends on behalf of the Ministry of Defence. As they said, "all reservists aged 21 to 33 years old will be obliged to come to assembly posts, in case of war declaration". The accused now faces up to 5 years in prison and an 8,300 dollars fine.

"The possibility of miscalculation and inadvertent escalation is much higher than it was a few days ago," Daniel Pinkston, North Korea expert at the International Crisis Group told Washington Post. However, the expert noted that the pronouncements on war came through the Central Military Commission, rather than through the National Defense Commission. It is the National Defense Commission, which has the authority to declare war and peace, and to mobilize the country for war.

The conflict escalation coincided with the annual military exercise of the US and South Korea in the South of the country. About 80,000 military men are involved in the drills, that imitate actions of the West at war with North Korea.

"The conflict should come to an end with partial dismantle of the loudspeakers," Aleksey Maslov, Professor and Chairman of the Department for Oriental Studies of the Higher School for Economics told Pravda.Ru. But the North Koreans are irritated not with this fact, but rather large-scale Ulchi Freedom Guardian drills. They are declared to be international for the first time. That is, they have been joined by a number of other countries, namely New Zealand, Canada, Great Britain, France, Austria.

Thus, the West showed that there is a new coalition, which is ready to defend borders of South Korea. One of the goals is to shake up North Korea, to see what it is capable of, as well as its leader and the army. That is a so-called "offensive reconnaissance". North Korea cannot but react to such acts.

We should also note, that despite the country's isolation, the North Korean army is a serious adversary, at least because of owning a nuclear bomb and means for its delivery, including missiles. Judging from the space images, North Korea completed modernization of its Sohae Satellite Launching Station in the West of the country.

The new station makes it possible to launch more complicated missiles with their further transfer by rail. Washington Times reports that the American intelligence has problems to follow this program of the Democratic People's Republic of Korea. As it also reports, besides this system, the regime successfully launched for the first time a ballistic missile from the submarine, capable of carrying a nuclear warhead.

The Chinese experts warned the US in April that the American estimations of the North Korean nuclear capacity are understated. The country actually disposes 20 nuclear charges, and will have up to 40 by the end of the year, as it keeps exchanging technologies with Iran, as Wall Street Journal reports.

"The Korean army has a very high-level battle readiness, and discipline," Aleksey Maslov explained to Pravda.Ru. "They have some dozens of surface-to-surface ballistic missiles, being modified after the Soviet, Russian missiles; CC-21 with a 160-km flight range after the Western modification."

"Pyongyang may produce them by itself, but it also purchases them in Syria. What about the ballistic missiles, that are capable of carrying nuclear warheads, these are the international missiles KH-08, that can reach the US territory."

"The North Koreans are apparently ready to demonstrate, that they are ready to move from words to deeds," Alexander Zhebin, director of the Center for Korean Studies at the Institute for Far Eastern Studies told Pravda.Ru. "They have been asking South Korea to stop its propaganda activity, which contradicts international law for years."

"However, South Korea came to believe that it is possible to shake up the North Korean regime, to inspire the people with doubt over the correctness of the existing policy, they though that the regime would collapse. It didn't happen. Such South Koreans' mood is being stirred up overseas. Obama said in January that the Democratic People's Republic of Korea allegedly has no future."

According to the expert, it is wrong to think that North Korea will attack the South at once. As it is known, 28,000 of American soldiers are deployed in the South. On the other hand, DPRK won't let the grass grow under its feet, when they try to undermine the existing regime. Placing loudspeakers along the demilitarized area, and in the area itself was taken by Pyongyang as an escalation of a psychological war.

"But I don't believe in the possibility of a large-scale conflict, in any case at this stage. After all, it was a conflict with the nuclear North Korea," Alexander Zhebin concluded.