So what exploded in China on 12 August?

China silences the reasons and consequences of the country's largest industrial disaster that happened in the city port of Tianjin on Wednesday, 12th of August. The blasts are still going on, residents take to the streets for spontaneous protests. And there occurs a parallel with Chernobyl - not only given the facts of concealment, but also the extent of the tragedy. So, what exploded in China? 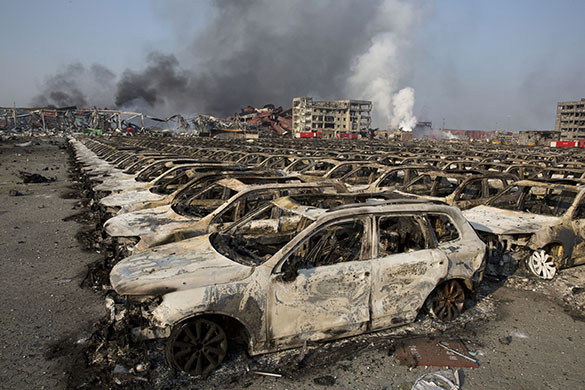 The first two explosions that took place late in the evening on Wednesday, were registered as an earthquake with a magnitude of 3.0. The photos taken from space show the territory spanning 3 km being completely burnt, as after the use of napalm. The images are compared to a nuclear bombardment.

As the blasts have been going on on Saturday and Sunday, nothing has been explained so far. The losses reach billions of yuans. 5,000 new cars were burnt at a parking place, residential district situated 800m from the port was completely destroyed.

Victor Ivanov, President of the Russian Union of Chemists told Pravda.Ru that ''there are three compounds there, that is sodium cyanide, potassium cyanide and ammonium cyanide. They are used to produce plastic and extract silver and diamonds.

These are dangerous substances, but they can not explode by themselves. There should have been some other explosive substances. And nothing has been said on it so far. If three or four chemical products are mixed together, you never know what can be obtained.''

According to the official data, the number of those dead reached 114 people, and about 70 are unaccounted for. Over 400 residents of the Chinese city took to the streets, mainly to the city administration and demanded information on their missing relatives, shelter, as well as data on the contaminated location and the consequences of it.

'Spontaneous protests'' are quite rare in China, where such activities have always been carried out in an orderly way. This time the police do not disperse the protestants.

Li Keqiang, Premier of China said that the situation is very difficult.

Many questions are left unanswered. Why were these stores placed so close to the residential areas? Why were the residents unaware of such a threat? And why did the logistics company store 700 tons of cyanide against only 10 tons allowed? A quarter of teaspoon is deadly for humans. And the substances were kept in a negligent way, and even in the open.

All these questions generate conspiracy theories.

The main problem is that production of chemical substances in China has been growing for years, as China signs a lot of futures contracts. But consumption falls and it leads to a drastic increase of stock. It is being stored in violation of safety rules, China Chemical Industry News explains.

There are also accusations of nepotism in the case. Son of the former head of Tianjin port police is reported to be the main shareholder of Rui Hai company. Corruption charges are not rare in China. In 2008 five thousand school children died after an earthquake in Sichuan province. They were knocked down because of low-quality floors and slabs. The matter was hushed up.

Lead researcher at the Institute of Far Eastern Studies (IFES) of the Russian Academy of Sciences, Deputy Head of the Center for Economic and Social Studies of China Pavel Kamennov commented on the situation to Pravda.Ru. ''I think it is an industrial catastrophe, the result of open disregard of safety rules, because of struggle to save money. The consequences may be more extensive, and there should be more victims,'' Kamennov said.

''The Chinese have problems with environmental consciousness,'' Mikhail Karpov, associate professor of the School of Oriental Studies of the Higher School of Economics said in an interview with Pravda.Ru. ''They got contaminated locality spanning 3 km, and huge destruction.''

''It is a small Chernobyl. Evacuation was not started at once, as the authorities must not have realized what really happened there. The information is being blocked at the moment, so the scope should be much greater.''

''China is a very corrupted country. It is neither good, nor bad, it is normal for such a totalitarian regime. What is prescribed to one man, is not valid to the others, in case they have some contacts with the authorities.''