The French are glad to die for Mistrals, not love

The decision on the Mistral vessels has not been made yet, French President Francois Hollande said, after meeting with his Russian counterpart Vladimir Putin in Yerevan, Armenia. On May 16, the parties will have to either denounce or execute the contract. Meanwhile, Paris is facing another dilemma: either to sink the Mistrals or put them in service of the French navy. Both options are like a psychological trauma for the nation. 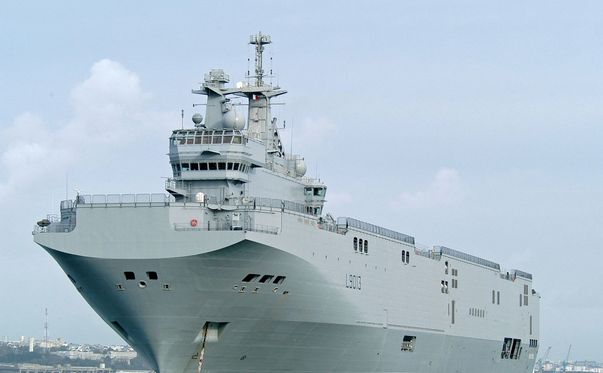 Destroying the new Mistrals would be a savage act of utter stupidity. Such a move would bury not only millions of euros, but also the work of so many people, who designed and built two beautiful, state-of-the-art ships.

Obviously, chances of their delivery to Russia are practically zero. However, prior to the meeting in the capital of Armenia, Yerevan, the French tested the second helicopter carrier, "Sevastopol". Why did they do that if things are hopeless? Of course, a loophole has been left, and much will depend on French President Hollande, who remains under intense pressure from Washington.

Also read: Why does Russia need the French Mistral?

Hollande may easily face accusations of betrayal. Many French citizens believe that Hollande should compensate Russia for the non-delivered vessels from his own pocket. Noteworthy, Russia and France signed the contract in 2011, which means that the document has no retroactive effect in connection with the Ukrainian crisis.  Let's see how the French President is going to act - the issue will be resolved in the coming days.

What will France do to the Mistrals?

Meanwhile, the French media discuss what France would do with the "Vladivostok" and "Sevastopol" vessels, should the country eventually decide not to deliver the vessels to Russia. The French are a nation of shipbuilders and travelers. Many in France believe that when ships already have names, sinking them at sea is like killing people.

According to French publication Le Figaro, sinking the Mistrals would be the most economical option to proceed with. Maintaining the vessels costs five million euros a month. As a French defense official said, for the workers, who built the Mistrals, it would be unthinkable to sink them.

Also read: France unwilling to act like US poodle with Russia

Noteworthy, the French take efforts in an attempt to solvate problem. Louis Gauthier, the head of the General Secretariat of Defence and National Security of France has visited Moscow twice. Yet, the Russian side did not accept his force majeure arguments that allegedly made the French side postpone the delivery of the Mistral vessels to Russia.

"This is not force majeure - this is simply a demonstration of the geopolitical weakness of France," chairman of the Military-Industrial Commission under the Government of the Russian Federation, Dmitry Rogozin said.

It is worthy of note that selling military equipment to any country always means that there is a chance for that equipment to target the seller someday.

The disruption of the contract will weaken France. Firstly, France would have to return 890 million euros of the 1.2-billion-euro contract. The fine would be a billion. Who is going to pay the astronomical amount? The government will, because the contract has a guarantee from the state. Yet, the French economy is not booming, so the burden will fall on taxpayers' shoulders.

Secondly, France will be left with two jumbo ships that the country will not be able to sell. All the equipment on board the ships is Russian, all inscriptions are in Russian too. Chances of finding a buyer are slim. Negotiations with Australia, Canada, Egypt and Algeria have already failed.

Will Russia suffer any losses if France does not supply the Mistrals?

There is an idea to put the "Vladivostok" and the "Sevastopol" at service of the French Navy. French sailors are not thrilled at all about such a perspective, Jean Dominique Merchet wrote at L'Opinion. Such a move would undermine the balance of the French fleet that already has three Mistrals, 15 frigates and six nuclear submarines to conduct offensive operations. The military budget is not to be increased either.

Surprisingly, France has a lot of internal threats: terrorism, uncontrolled migration, another economic crisis related to Greece, but President Hollande is only concerned with annoying Putin in favor of his "friendship" with Anglo-Saxons. Russia has never attacked France. France has always been a mediator between Russia and the West. Until recently, Russia and France have had very good relations. Today, France is involved in the Ukrainian conflict that has nothing to do with France.

The disruption of the contract will undermine the French military industry, which is truly unique and independent.

What about Russia? "A refusal to supply the ships under the contract would, of course, be a bad sign. Yet, for Russia, from the point of view of maintaining the defense capability, it would mean nothing at all. Russia entered into the contract primarily to support our partners and their shipyards," Russian President Putin said on April 16, during his traditional Q&A session with Russian citizens.