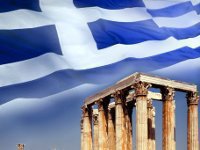 A myth has been created in the European sphere with regard to the Greek "bail-out": that northern Europeans are saving southern ones! Angela Merkel, for example, is claiming that the German taxpayer would be the main victim of any renegotiation of Greece's debt, since Germany holds over 20% of it, and her finance minister Wolfgang Schäuble has recently reiterated that she would not accept it. However, the predominant German view is that Grexit would be a calamity for Greece, a minor shock for the eurozone and a non-event for the global economy.

But, the loans supplied by the eurozone and the International Monetary Fund amount to the huge sum of €226.7bn (about 125 per cent of GDP), which is roughly two-thirds of total public debt of 175 per cent of GDP...went overwhelmingly not to benefiting Greeks but to avoiding the writedown of bad loans to the Greek government and Greek banks. Just 11 per cent of the loans directly financed government activities. Another 16 per cent went on interest payments. The rest went on capital operations of various kinds: the money came in and then flowed out again. While this is the half of the truth, there is another half - that Germany has gained enormous amount from its position in the EU. As Reuter analyses:

Bailouts totaling more than 400 billion euros, northern euro zone taxpayers have not actually lost a cent...on the contrary: Berlin saved 10.2 billion euros in 2010-2012 because of lower borrowing costs, as yields on its 10-year bonds fell from 3.39 percent to 1.18 percent now (Allianz)...the German federal budget saved 8.6 billion euros in 2011 due to low ECB interest rates and the safe-haven impact of investors putting money into Germany (Jens Boysen-Hogrefe of the IfW economic institute). Those savings rose to 9.6 billion in 2012 and the safe-haven effect will alone be worth 2 billion in 2013. If we add up the interest rate advantages gained in the period 2010 to 2012 and those that Germany will benefit from in the years to come, we arrive at cumulative interest relief for the German budget of an estimated 67 billion euros. In short, apart from the initial bilateral loans to Greece in 2010 which totaled 52.9 billion euros, no euro zone taxpayer money was sent to Greece, or any other country. All the later bailouts were financed on markets via the eurozone bailout fund. A study commissioned by the German Bertelsmann Foundation showed...that if Germany were to return to its old Deutschmark, its annual GDP would be 0.5 points lower between 2013 and 2025, resulting in a loss of 1.2 trillion euros over the 13 years - half the size of the German economy in 2012.

Contrary to this reality, Varoufakis, the decent second-rate economist and "libertarian" Marxist, just before the election, without qualms, in an interview on Radio 4, BBC, supported the propaganda of Germany's elite, that citizens of Europe are being damaged by bailing out Greece! As he quotes: my dear follows the problem is not that you haven't paid enough; the problem is that you've paid fa...r too much: 240 billion to Greece over the last five years!

Accordingly, Varoufakis will bring a plan to Brussels and Berlin in order to minimize the cost to European people (Slovaks etc.). In order to achieve it - he will come up with "genuine reforms"...in order to put an end to bureaucracy, corruption, and tax immunity and to create a "rational plan" for debt structure. He wants to bind our repayments to our growth! In fact, as I have showed in a recent article, the entire program of Syriza was being hatched up on the assumption that it will write off half of its debt. However, after the election, Varoufakis added another dimension: '"smart debt engineering" rather than an outright cancellation of some of its €315bn foreign debt'.

In other words, debt restructuring; fiscal surpluses much smaller than the draconian 4.5 per cent or more required under the existing Memorandum; and extensive structural reforms, including radical reform of tax collection. While he's still seeking a radical and insightful analysis for saving Europe, during the negotiations with his "partners", Varoufakis in an op-ed in New York Times, refused the option of taking more loans, without a 'credible plan for growing the economy', having suggested that 'the European Central Bank should purchase a single asset in the secondary markets: European Investment Bank bonds', an approach which implies the exclusion of national banks from the banking system. This approach is compatible with the proposals of orthodox "economists".

It excludes, therefore, the fact that "quantitative easing" in the eurozone started up in inappropriate conditions. Because 'its hallmark is the advance of negative interest rates and negative bond yields across the continent.  That did not happen in the US and the UK because these countries had large fiscal deficits when the Federal Reserve and the Bank of England began their respective bond-buying programmes. There was more than enough bond issuance back then to keep bond yields positive. In the eurozone, by contrast, extreme monetary loosening confronts fiscal orthodoxy. Result: eurozone bonds are so scarce that investors end up paying for the privilege of lending to governments'.

It would not be surprise that even analysts of non-orthodox economics consider' Syriza's "economics" as "voodoo economics", namely, the belief that a spending splurge will pay for itself, if it just pushed with enough energy and determination'. Not to mention here the naïve statements of Costas Lapavitas, another prominent figure of Syriza, who promotes the "belief" that Europe can change from within! In fact, 'the government appears split into three camps.

The first, which includes Panayotis Lafazanis, energy and environment minister, would be happy for Greece to leave the eurozone and return to the drachma. The second, which counts Yanis Varoufakis, finance minister, and some of Mr Tsipras's close advisers among its members, calculates that Greece's European partners will blink first, offering terms that will enable the Syriza government to stay in the eurozone and frame it, for domestic public opinion, as a victory. The third group, which is close to Yannis Dragasakis, the deputy premier, supports a compromise with Greece's creditors'.

Finally, as a report reveals, Syriza reached an agreement without trying at all for "hard negotiations", as it had promised, to extend its bail-out program abandoning the preelection promises of annulling the existing bailout, of cutting the debt level and of losing even its authority to use eurozone's bailout fund of €10.9bn in bonds for bank recapitalization: now, it will be controlled only by eurozone authorities...leaving the country under the same dictate: of "troika", which, now, is being transformed a permanent "institution", by replacing the already Memorandums with pseudo-consensus Memorandums!

Out of this agreement Syriza made a commitment to continue running primary budget surpluses (payments before of interest on its debts) of 3 per cent and 4.5 per cent in 2016 - a demand from creditors in order to make room for the interest payments that start in 2023. In other words, it will continue austerity policies! The only issue regarding their "memorandums", therefore, they have in the coming months to skirmish with their partners - is to negotiate a primary surplus of 1.5 per cent of GDP. At the political and geopolitical level, SYRIZA's government, as was shown with the visit of Tsipras, the Prime minster of Greece, in Moscow, Greece cannot expect too much, despite the fact that Russia is open for big projects in the Balkans.

In conclusion, US, UK and Europe, cannot change from within. Neither can change these countries from "nationalist" parties (Ukip etc.). Nor can they change by following the "opinions" of orthodox mainstream "economists" and "experts", such as Krugman, who support the general approach of the European "Left", as does Stiglitz, and the new star of global "economics", Piketty, who, among other misunderstandings, believes that 'if we need a democratized economy and social progress' at the European level, 'we need to democratize the European institutions'...in order to create a 'new form of democratic public authority, one which supersedes the nation state'...that the main cause of the present crisis in Europe are the "austerity policies" imposed upon its members. Because the main cause, as Takis Fotopoulos has showed persuasively, is the integration of European South into the EU and N/G (WTO etc.) with unequal development and power with the rest members.

Even if we consider Germany, the central hub of European economy, it has the largest contingent debt pile in the EU, which stands at a massive 145 per cent of gross domestic product. These are debts which the public sector is not yet formally obliged to pay back, but may need to honour in the future. It has created, moreover, the conditions for the next crisis in the sector of "Germany's life assurers". This does not mean, of course, that Germany is not running a current-account surplus: because 'all northern European countries with a Germanic language are running a current-account surplus. Indeed, the Netherlands, Switzerland, Sweden, and Norway are all running surpluses that are larger as a proportion of GDP than Germany's'. Nor can western world be saved by the naïve analysis of Zizek, the "communist" of the Transnational Elite, or Chomsky, the "anarchist" of the same elite, since they don't acknowledge the systemic changes in NWO of N/G and its institutional framework. Western world in general can be saved only by those political organizations which embrace a philosophical and political Project while building up popular fronts for national and social liberation, which should be promoted by Russia, if we want to save the world and the life of the planet...