At the roar of the cannon we had to wave our flag in a foreign land, not for the success of the Italian genius that to look good is nothing else except the inventiveness of the poor. And against a defenseless nation whose army could not even compete with the Italian. 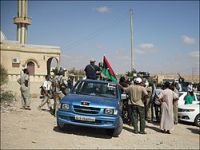 Tripoli, beautiful land of love, sweet comes to you this my song! The flag be flown in your towers at the roar of the cannon!

So sang Italy in the early twentieth century, when she imagined herself being something of important and instead she picked up only the crumbs that others had left on the street. So she illuded herself and carefree ran toward the carnage of World War I that a little later would burst.

At the roar of the cannon we had to wave our flag in a foreign land, not for the success of the Italian genius that to look good is nothing else except the inventiveness of the poor. And against a defenseless nation whose army could not even compete with the Italian.

In more recent times and after being closed the historical parenthesis of Colonel Gaddafi and the Jamahiriyya he had founded without firing a shot, Italy thought she could cash in for the betrayal that it had achieved once again. This forgetting that the traitors never have a real say in the harmful actions to which they lend themselves, especially when they are only poor bullies.

It's of these days the news appeared that ISIS is rampant in Libya. Killing dozens of Christians. Sentencing to death and slaughtering anyone who opposes its distorted view of Islam. There have even have been addressed to Italy threats of bombing with Scud missiles. According to some rumors, the members of ISIS are already in our area, not far from Rome.

Aside from the dead with their throats cut for their religious diversity, we can say that some are hotshot propaganda. It is not clear by whom, however.

Our Prime Minister Matteo Renzi, the man with an ice cream in hand, immediately offered to send a contingent of troops to defend freedom, poetry and all the beautiful things that make life worth living in the West. Not least that slice of booty oil that Italy is so determined to get for herself by law for the role she has played in the bombing campaign. But shortly after Renzi backtracked: someone has explained to him that it was not the case, that would not be a victorious short ride and that in fact to Italy was not for nothing.

There is no peace in Libya but it was natural to finish so. Only fools could and can still believe that more than eight months of fierce bombardments have been put in place to defend a who knows what freedom and democracy in the post-Gaddafi Libya.

Libya found herself slaughtered and fallen into a Somalia condition and used as a forerunner for the war against Syria and Iran. And yet, perhaps for an example of historical justice, not only the Green Jamahiriyya disappeared but Italian democracy too.

Sure, it was not a thing blatant and flashy as for Libya. Of course, the process was already in place by many and too many years and therefore no one has noticed it, let alone the Italian people, but the fact remains that the disappearance there has been.

The point that interest us directly is that the Italian Prime Minister in those days, Silvio Berlusconi, literally fell from the clouds when began the facts which led to the destruction of Libya and the assassination of brother leader Muhammad Gaddafi.

It became apparent that Silvio Berlusconi knew nothing of what was brewing against Tripoli. But Italy had hosted Gaddafi in Rome a year before signing on that occasion a treaty of friendship and non-interference, as well as numerous other trade agreements.

Italian oil company ENI, founded by Enrico Mattei bemoaned and died in circumstances that someone goes back to a murder done by the Italian mafia but commissioned by the CIA, was at home in Libya. His presence was so important that almost excluded other foreign companies. And there was an entire galaxy of small and medium-sized Italian companies that traded with the Libyans and many of these companies had factories on Libyan soil too. We can not forget the great business in the Libyan public constructions, including all the major Italian manufacturers. And finally how to ignore the rescue of Italian bank Unicredit? Twenty million euro paid ready cash by Gaddafi thanks to which his failure and a dangerous domino effect on the entire Italian banking system was avoided.

So a lot of money run and yet the old Berlusconi was still surprised and shocked by the outbreak of hostilities.

You cannot think that there were no Italian intelligence agents in Libya, given the number and nature of the business that our country had with Tripoli. But our intelligence services apparently have not seen or heard anything that was worth reporting to our government.

Similarly our diplomats in the United States, France, England and other chancelleries of Europe have not been able to grasp even the slightest clue, even something of indirect that would put our leaders on notice.

Our generals and colonels have never heard any rumor during their meetings with NATO colleagues, no whisper, no allusive sentences dropped without conclusion. Nothing at all.

The reality is different: the Italian rulers have always been perfunctory, some less than others but all subjected to the command of the US. With Silvio Berlusconi the situation has reached a higher level, however. Always obsessively dominated by those his sexual instincts that so filled with ridiculous our country in the eyes of the world. Always on the run from a huge number of judicial investigations, for crimes that in another country, even just a little more civilized of contemporary Italy, would have cost the political career for even a mere suspicion.

And is natural that to such a person is given only enough rope to hang himself and not be allowed instead of governing a Nation with dignity. Notwithstanding that, it is hard to believe that the word "dignity" find place in the personal vocabulary of Berlusconi and in general in that of the Italian politicians.

The Italian Democratic Party and the remnants offal of the Italian left urged the government to go to war in the name of democracy and freedom mantra, loyalty to the Atlantic ally and NATO. Retaliation came when Berlusconi and his puppets did the same in reversed roles during the ignoble war against Serbia of Milosevic and the Balkan tragedy. Berlusconi managed to withstand a week and then capitulated, as expected.

Once again to pay for the filth of the Italian domestic politics were a foreign country and a foreign people who had not done anything against Italy but that on the contrary we Italians had already tormented much in the past.

And yet you should remember one thing well: i.e. a Nation that does not know how to express a government worthy of this name nor control her army and her secret police, is a Nation without a future. Therefore I wonder when History will make a pair with us and Italy will end up dismembered and removed, to the political games of foreign States that they said our friends until a few moments before. Maybe soon.