US President Barack Obama has decided to show his teeth. However, the US president is doing it under the pressure from Republicans. Barack Obama has worked hard to earn the reputation of a lame duck. Pravda.Ru interviewed deputy director of the Institute of USA and Canada, Valery Garbuzov, about the current situation in the White Duck House. 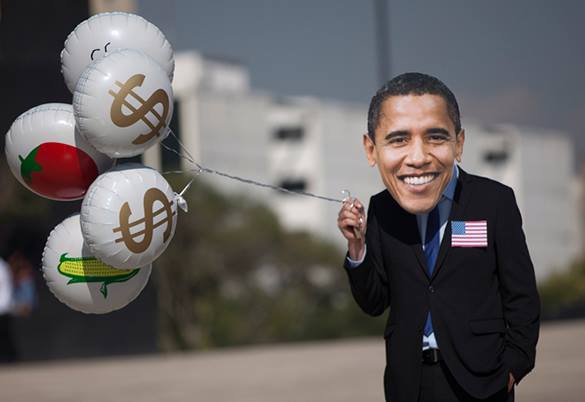 "What are the main things in Obama's recent State of the Union speech that a Russian citizen should pay attention to?"

"Obama's speech was similar to many of his previous ones. In the speech, Obama touched upon problems of domestic development of the United States of America. The main problem that the US administration faces today is the state of the American economy and the effects of the financial and economic crisis. As for external problems, Obama has repeatedly spoken about them in his previous speeches and appearances. These problems are associated with Russia and Ukraine, the fight against the Islamic State and other traditional foreign policy issues, in which the United States is involved.

"The atmosphere, in which Obama delivered his speech to the Congress, was not a usual one. Obama's Democratic Party had lost the majority at the House of Representatives and the Senate. The Republicans gained the majority. Therefore, Obama was speaking to the people, most of whom were unfriendly to him.

"Of course, one should bear in mind the fact that there are less than two years left before the next presidential election. Obama is a lame duck, because he has no majority either in the House of Representatives or in the Senate. That is his hands are shackled and so are his initiatives, because a US president does not rule alone - he rules together with the Congress. Therefore, Obama tried to represent himself as a strong and dynamic leader, rather than a lame duck.

"He received most of applause from Democrats, while Republicans were listening to his speech skeptically. I do not think that the speech could change the attitude of the American society to its sitting president.

"The president, who enters the White House, always has a higher rating than the president, who leaves the White House. Obama will not be able to avoid it. It is not words, but action that can raise his ratings. Obama's main initiative - the immigration reform - has failed. Now he tries to take elements of the immigration reform and push them through presidential decrees, bypassing the Congress.

"In the US, there is a huge number of illegal immigrants. The goal of Obama's immigration reform is immigration amnesty in the first place, so that millions of immigrants living in the United States could illegally obtain US citizenship. Official statistics says there are five million of them, but many believe that the actual number is 9-10 million. All of them are potential voters of the Democratic Party.

"Republicans have always criticized Obama for doing it all for selfish purposes. Obama does not want to be a lame duck. He wants to create an image of a strong president, even though Republicans criticize him for being weak and indecisive. As they say, better late than never, and we can see Obama being resolute in foreign policy toward Russia. The position of the US president towards Russia is largely based on the political situation inside the United States. One can say that the Republicans have nailed him, and Obama can not go against them."

"Do you mean that Obama's remarks about the Russian economy in tatters, about the international isolation of Russia target the Americans in the first place?"

"Of course, this is all for Americans, first and foremost. It should also be borne in mind that this kind of speeches, the State of the Union, is a mixture of political expediency, exaggeration and even demagogy. Obviously, Western sanctions have complicated life in Russia, the economic situation in Russia. Of course, this is our fault that our one-sided economic development did not anticipate that this could happen. Now they talk about restructurization and diversification of the Russian economy, but they have been talking about it for years."

"Do the US authorities believe indeed that the sanctions can force Russia do what the USA wants it to do?"

"Obama has recently said at a press conference that Russia will not change its political course because of the sanctions. He doubts that the sanctions can reach the desired effect. Maybe, he realizes that the goals of these measures - turning the ship of Russian foreign policy and, let's say, removing Putin from power, returning the Crimea to Ukraine - is unlikely to happen.

"What can these sanctions do? What have they done? They, of course, have greatly harmed the economic progress in Russia, which, of course, is based on fuel resources and the implementation of the energy strategy. The Russian authorities hoped that the implementation of the energy strategy in Russia would solve many important problems inside the country. Indeed, many social problems  have been solved. As for foreign policy, Russia wanted to take a foothold in the European market and ensure a position of an energy superpower for itself.

"Today, this is the strategy that the USA and the EU attack. However, they attack themselves too. This concerns Europe and primarily Germany. I do not think that the sanctions will make the Russian population rebel against the government and so on. These hopes of the West will not materialize.

"The United States of America has been keeping Cuba under sanctions for 50 years, but they have not removed Castro from power. They have not led to the evolution of the Castro regime in Cuba either. Today, as we can see, the situation starts to change. Sanctions can work as a weapon to reach temporary, short-term , rather than ultimate goals. At the same time, Russia should be smart enough to take advantage of these sanctions to finally realize the widely talked-about plans."

"Don't you think that our civilization is on the way to its end?"

"No, but it's all complicated, of course. The collapse of the Soviet Union led to negative effects. For example, many independent states started moving away from Russia. Russia's geopolitical space and sphere of influence has narrowed considerably.

The collapse of the USSR was the collapse of a huge empire. Such a phenomenon is always painful to any nation, at all times. When Putin came to power, Russia started addressing many of its problems to restore the lost geopolitical influence. Russia paid attention to the Eurasian project, and the USA was very unhappy about such a development. For America, any of Russia's integration initiatives is a desire to revive the Soviet Union. Therefore, the United States eyed the territories, where internal forces work to separate, rather than to consolidate the society. Georgia was a bright example of this course, but it didn't work well. Ukraine is a very complex society that failed to overcome many problems of the post-Soviet period. Feuding oligarchic groups, corruption, absence of normal political culture in general - all this became the ground, where one could use the factor of Western influence."

"The confrontation between Russia and the West is close to war. How can it be avoided?"

"It is difficult to give a recipe for solving this crisis. All parties say that hostilities should be stopped. Poroshenko says that too, but one can hardly trust him. All of his speeches and remarks are a mixture of empty words, outright lies and attempts to win the support of the West. I think one has to wait and believe that someone in the West - not in the US, but in Europe - will take a sober look on the events in Ukraine.

"There was a time, when they were idolizing Mikhail Saakashvili, a promising boy, who would make Georgia look like candy. Where is the candy, and where is this boy? Ukraine, unfortunately, is on the same path.

"I do not cast the Europeans aside. Russia is closely linked to Europe economically. Many European businessmen, who work with Russia, are highly dissatisfied with all these sanctions. They start putting serious pressure on their governments, and it appears that pressure should grow stronger.

"Obama continues talking about American exceptionalism, although this idea is common to all American presidents. America, in fact, represents almost all ethnic groups of the world, all religions of the world, all the variety of cultures of the world. I think that his has played a cruel joke on the Americans: they have developed the usefulness complex. They see themselves as a model to be followed by others.

Managing the American society is difficult. In the American society, there is a great deal of potentials for various conflicts. The emblem of the United States of America says: "Unity in diversity". In reality, though, uniting this society is a hard nut to crack. Of course, one should always take efforts to unite such a society. The US authorities speak about exceptionalism of the American nation to unite the American people, to make them stand together."

"How will Russia's relations with the United States develop? Is the Ukrainian conflict the beginning of a major war? Will there be a direct military confrontation, a direct war between NATO and Russia?"