Of Mice, a few good Men and one big Bully

In literary master John Steinbeck's 'Of Mice and Men', we the reader, glean a real glimpse of what it means to be caught in a impossible situation despite the presence of extenuating circumstances, even evidence that proclaims the contrary: one's innocence. If the latter is ignored and shunned it opens the door to mob rule. 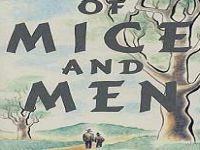 Often tragedy follows in ignorance's bliss. That is exactly what unfolds in Steinbeck's novella... Protagonist Lennie Small is a migrant worker encumbered with a debilitating condition. He is mentally or emotionally challenged. Moreover, his malady contributed to his fall from grace. Suspected of murdering another innocent, a young girl whom he befriended, Lennie out of fear then flees; he heads for the hills.

His 'partner' and minder, George Milton out of compassion gives chase. No small wonder either. If he doesn't find Lennie first, for sure, the lynch mob will exact their revenge once they corral, not the accused, but the guilty party. Fate intervenes though. Usually this is the case in 'fictional' writing. With little time to spare, George first gives verbal solace to his aggrieved partner. He knows that the truth of itself is not enough to spare the innocent.

The fact remains: Lennie is without an advocate; a legal counsel that would present solid evidence in a court of law; but George also knows even a legal defense luxury would avail Lennie little hope especially when a trial convened for an outsider; an interloper whose social status was that of a mere migrant worker. No. George decided right then: Lennie did not have fair chance even in the best of circumstances. There was only one option. George had to act.

And it had to happen now; then and there, under nature. He pulled his revolver. With a trembling hand and troubled spirit George fired once. In an instant Lennie's 'troubles' were over. In frontier style, a 'sentence' was dispensed. Lennie was now in a dream state; removed to that pleasant ranch in the sky; replete with bunnies. But was justice really served?

Given the context of the setting of America in the 1930's during the Great Depression, some would argue that a mercy killing was the best possible outcome. I am not of the same persuasion.

There are lessons to be learned though from this fictional account; good lessons that apply to modern times. Those lessons would even apply to crisis management. Have a look at this world. Copious cases abound where mob rule and a rush to judgment should have been stopped dead in their tracks. Russia comes to mind.

Although innocent of any violations of international law, its Western partners, America, the European Union, much of the British Commonwealth have all banded together. Mice that they are, each rodent now is in total accord with the master bully, America; they are all too eager to dance to whatever tune the U.S. pied piper pulls from his bag.

Moreover, their vassal Western MSM parrots and spouts the same fake tunes, day and night. Without proofs of Russia's direct involvement in the Ukraine crisis, the foreign meddlers have banded together; those mice at the bully's prodding even formed a lynch mob. The bully's aim is to corral Russia. Using covert means the cowardly accuser America through NATO has encircled Russia. And with their illegal economic sanctions the rest of the Western mice 'democracies' have backed Russian President, Vladimir Putin into corner. That is a mistake. President Putin is not Lennie. Russia is not handicapped. Neither is either in need of a 'George'.