The Devil in the Vatican

There appears to be no limit to the demoralization and degradation of the Ukrainian nation! Along with the civil war involving massive abductions and murders, genocide using forbidden weapons, torture of innocent people and complete destruction of houses, mines and infrastructure, there has been a stunning loss of all dignity and morality! 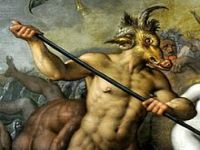 Consider this horrendous example: Many elderly people have been left to die from hunger because their savings, pensions and supply of vital medications have been blocked.

Eighty elderly people have died recently due to the Kiev Junta's cruelty. They survived WWII just to be dispensed by their own government - a government, which has deliberately brought hell into their lives! A few survivors of WWII remembered that the Germans were less brutal than the Ukrainian National Guard's army.

There are also other shocking events reported in the villages where the Ukrainian army is lodging, including the repeated raping of teenagers by these drunken barbarians who beat their victims savagely afterwards. The nation, which claims to be a pure race, tattooed with the Nazi insignia has lost all shame!

This group of bare-chested wild blondes appeared at numerous public places for the past few years, disrupting official ceremonies while demanding controversial abortion be officially recognized, legalized and written into law. They also demand that homosexuality and bestiality must accepted by the church!

Their recent so-called protest was staged on Christmas Day, December 25, 2014 at the Vatican! A topless Yana Zhdanova with black letters across her chest declaring: "God is Woman," darted across the St. Peter's Square and snatched baby Jesus from Nativity scene during the group's pro-choice demonstration.  What did possess her brain to commit such a sin? This sacrilegious act was videotaped and available for the world to see. How can anyone do this on the holiest day of the year? Even non-believers respect Christmas around the globe.

Take a close look at her face! She has a demonic wildness in her hateful eyes!

What kind of drugs is she on? It's not a secret that the Ukrainian army indulge themselves in various form drug abuse. They littered Novorossyian land with syringes and empty bottles of hard liquor stolen from the locals when the army occupied the territory of the newly independent DNR and LNR regions.

Sometimes the drunken Ukrainian battalions are shelling each other! That was observed and confirmed by the self-defense Novorossyian fighters! During the peace process signed in Minsk, the Kiev Junta didn't stop provocations. In fact they continue bringing more artillery and took strategic positions! The shelling remains daily and both sides taking losses.  Officially no one reports about it in order to go along with the fragile peace game!

Donbas nevertheless celebrated the Holidays with an awe-aspiring Christmas tree, decorated in their Novorossyian flag colors! There was a concert with local dancers and singers.  Children received a few treasured gifts delivered from different parts of Russia.  Most donations were anonymous.  The good-hearted people showed their love and support to the forsaken regions, in anticipation to collectively bring back much awaited happiness and hope!

God is with you, Novorrosyians! Merry Christmas and Happy New Year to your beautiful children, each family, your heroic self-defense warriors and to all courageous foreign correspondents who follow you to the frontline to unfold  the objective views, shamelessly avoided by a mainstream media! Amen!