USA strangles Europe under the cover of Ukrainian crisis

Hungarian Prime Minister Viktor Orbán said that "a new era has started when the United States not only interferes but takes an active part in internal politics in central European countries". According to the Hungarian Prime Minister, this was "due to the Russia-Ukraine conflict, and the free trade talks under way between the European Union and the U.S.". Political analyst Vladimir Bruter agreed to comment this statement in an interview to Pravda.Ru. 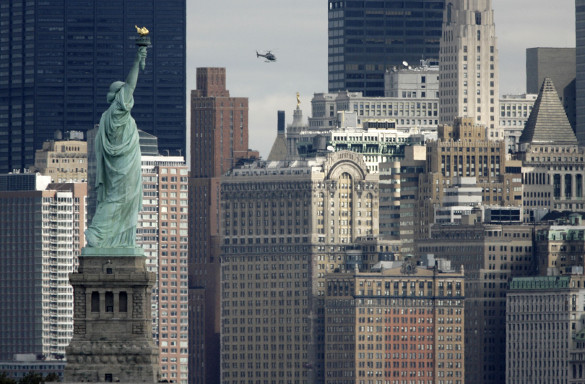 "The Hungarian economy depends on many macroeconomic decisions made by the U.S. In particular, the Americans can largely control the value of money for Europe, the Euro exchange rate. Also Hungary is a NATO member and depends on the common defense policy. It also should be noted that the US entry ban for the Prime Minister Orbán is a direct demonstration of the US attitude to those who does not share their foreign policy. This is a reminder of the fact that the U.S. have rather effective tools to create a conflict within a country that may result in overthrow of power at the US's bidding," Vladimir Bruter pointed out.

A Pravda.Ru correspondent asked the political analyst to clarify what disputes are on the free trade between the U.S. and countries in Central Europe. Why Orbán is not talking about the European Union, does it mean that the European Union is the conductor of the U.S. policy?

Vladimir Bruter pointed out that the European Union is not the conductor of the U.S. policy in terms of economy, but Europe depends on global financial markets, owned by the U.S. - Europe does not export anything from the U.S., goods are supplied solely from Europe to America. And financial flows come from that side of the ocean, not otherwise.

The political analyst stressed, that's why the zone of free trade between the European Union and the U.S. will result in the fact that the American financial capital will format the European economy for its own needs. And it can always mean that the actual independence of the European economy will simply cease to exist. That is particularly dangerous for small countries and for countries with insufficiently developed economy.

Orbán highlighted that he did not want to take part in a cold war. "The U.S. want to drag us into a conflict which could only be bad for us. A cold war sentiment is taking shape between the U.S. and Russia and we do not want to take part in this," he added. The Pravda.Ru correspondent asked the expert if it was possible to keep out of a cold war in the age of globalization?

"Hungary is a NATO and EU member. Obviously, it is forced to support decisions of the blocs or create separation lines within them. As for the latter, Hungary is not that strong, and it does not want to provide support. This is the dissonance that arouse in Europe due to the American policy. The U.S. policy is certainly unacceptable for Central Europe," Vladimir Bruter stressed.

The Pravda.Ru correspondent asked the political analyst what the risks were for Orbán in taking even a neutral stance?

"He risks everything. The U.S. attitude to him is negative because they are afraid that Orbán will establish a precedent. It is very dangerous for the U.S. considering that Orbán is very popular within his country. Any such precedent creates an alternative that will allow Europe to pursue an independent policy. There is no such opportunity now, and the U.S. are trying to put it out early on so that no one would like to lift their head up," Vladimir Bruter answered.

USA has its own levers of pressure on Europe

Lead research scientist at the Institute of Europe of the Russian Academy of Sciences Aleksey Drynochkin noted that the U.S. has its own levers of pressure on Europe, in particular, Hungary: "If earlier there were accusations of insufficient democracy, now there are allegations of corruption. There is a well-known story when Americans have anonymously banned entry to the U.S. and imposed repressive sanctions against six Hungarian politicians. They were accused of corruption, but when Hungarians tried to get an accurate list, the Americans did not provide it. It was not leaked to the media, all that was left to do was to read coffee grounds. Many other measures were taken under this slogan, such as an organized demonstration against imposing an Internet tax. Now they refused to impose it, but here maybe actions of Americans coincided with ill-conceived actions of Orbán himself, his government. It is quite possible that some technical regulations on operation of nuclear stations within the European Union may be toughened. There are plenty of levers of pressure".

In terms of a bare economic theory, this project is likely to have no problems. But if we add a political aspect that is currently very strong then Hungarians are afraid that their interests will be absolutely disregarded. In fact, I think not only Hungarians, representatives of other European countries as well - Slovakia, Czech Republic, Austria. The fact that this project is politically charged has obviously stepped forward these days. It is possible that Americans are pursuing their own goal - to completely finish off Europe. We see that the European Union is less and less independent in making any political decisions, and more and more becoming the conductor of some foreign actions and intentions," Aleksey Drynochkin stressed.

Orbán highlighted that he did not want to take part in a cold war. "They (the U.S.) want to drag us into a conflict which could only be bad for us. A cold war sentiment is taking shape between the U.S. and Russia and we do not want to take part in this," he added. The Pravda.Ru correspondent asked the expert if it was possible to keep out of a cold war in the age of globalization?

Aleksey Drynochkin responded by saying that not only Orbán opposes it but other parties as well. Hungary is a small country and its residents are well aware of the fact that they may turn out to be in the middle of a "front line" in case of any more aggressive actions.