It is always commendable when a person or a country comes clean, owns up, admits it was wrong and promises never to do the same thing again. From this viewpoint, the USA should be congratulated. However, this is only valid if indeed there is change and with the Obama Presidency we see this is difficult. The question is, can pigs fly? 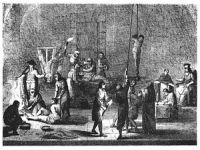 The infamous CIA files bring nothing new for those of us who have been privy to the most shocking acts of barbarism committed since the Bush regime tarnished the image of its country, insulted the precepts of the Founding Fathers, stuck the middle finger up at the rest of the world, threw the international law-book down beside the toilet bowl and allowed the endemic hostility registered among the "agencies" which implement Government (Lobby) policy to come to the fore.

Since 2001 I have been attacking this blind policy stubbornly followed by Washington, by Republicans and Democrats alike, and despite presenting evidence of horrific scenes of human rights abuses, my pieces, while greeted by some as important and desirable calls for the truth, decency and universal principles, were greeted by others with death threats, insults in my e-mail, vows to place my dog in a vat of acid, to behead my children, among lies that such events never happened.

Well, they did. But nothing new here. After all, what does the CIA do? It is basically a gentleman's club for psychopaths, sociopaths, lunatics, misfits...bastards from the four corners of the Earth, committing murder, overthrowing democratic governments and imposing Fascist, repressive, sexist, homophobic and racist regimes which support the policies of the US Government (aka the lobbies which pull the strings of those who stand for election at all levels of governance).

The first mistake was to allow something like George W. Bush and his clique of cronies (Condoleeza Rice, that Rumsfeld, Cheney and company), a motley bunch of neocon nutcases peppering the world with cluster bombs and depleted uranium when they were not peppering the backsides of their mates with buckshot while out murdering wildlife, anywhere near Government.

The second mistake was not to realize by now (when it is patently obvious to those of us observing from outside) that the "agencies" which implement US policies so democratically (they are unelected) have long been at loggerheads among one another, each one vying for contracts, attention whores crying out for a job. The FBI, as a rule, does its job very well. The CIA, as a rule, does not, unless we are allegedly speaking of a murder, a criminal act of cyber piracy or a death threat against a family or a pet. Or a friend's "bugsplat" drone attack against a happy family enjoying a wedding party. J (Did our readers know that the cowards flying these drones from deep inside the USA often pump their arms in the air and scream BUGSPLAT? when they make a hit against a target?)

Mistake three was to use a ham-fisted, mentally challenged thug to do the work of a skilled silversmith. The FBI do interrogations, the CIA do assassinations.

So commendable as it was to own up, do a spectacular mea culpa in public, hang the linen out in public and vow (violins) never to do the same thing again (stop violins), can the USA effect a real, meaningful and lasting change to its policies? The lessons from the last fifteen years would seem to suggest not, as we saw in Kosovo, as we saw in Afghanistan, as we saw in Iraq, as we saw in Guantanamo Bay, as we saw in Libya, as we saw in Syria. Thousands of violations of human rights across the globe.

For those who are by now red-faced and seething obscenities from behind their screens, no, the answer to terrorist attacks is not to ignore them and turn the other cheek, it is something called intelligence, which is conducted at the lowest possible level behind closed doors and the history book provides a very clear message that the way forward is to bring terrorist organizations into the political fold. If they refuse, the answer is development, not deployment.

Some of us have worked that out alone without one cent in training, education or special missions. That said, those of us who have worked in humanitarian projects and who dedicate our free time to causes, striving to implement universal values of goodwill around our beautiful home, our planet, are also eternal optimists.

So to the question, can pigs fly? I would like to answer: Not unless you give them wings.