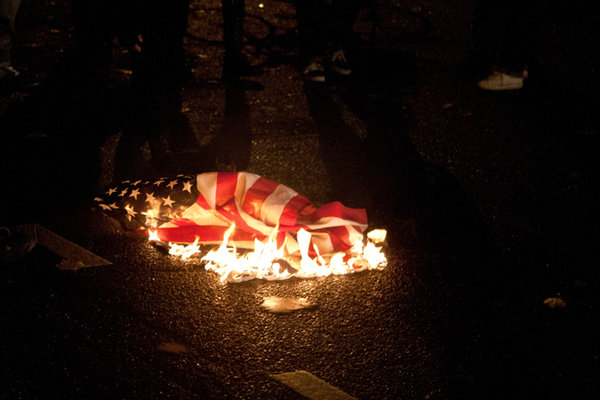 Eighteen-year-old Brown was killed on August 9 after he robbed a store and then refused to obey the order from a law enforcement officer to surrender. When the black man raised his hands, the officer fired six bullets at him at close range. If it was the case of a white police officer killing a white teenager, or a black officer killing a black teen, there would be no protests at all. However, the police of Ferguson (two-thirds) are mostly white employees, while the population Ferguson (two-thirds) is black.

Missouri Governor Jay Nixon declared a state of emergency on Monday and deployed units of the National Guard in Ferguson. In New York, in California, people block highways and bridges. Many protests evolve into violence and vandalism: people set vehicles on fire and loot stores.

"We are a nation built on the rule of law...We need to accept this decision was the grand jury's to make," Obama said in his address to the nation on Monday night. The president refuted the idea that segregation and discrimination was systematic in the United States and assured the Americans that those were solvable problems. But progress, Obama warned, won't come by "throwing bottles or smashing car windows. It certainly won't be done by hurting anybody."

It just so happens, that in Kiev, there were protests of oppressed people, but in Ferguson, there are vandals and looters. When Molotov cocktails are thrown into Berkut fighters, such actions were interpreted as defense against arbitrary power. When African Americans attack their own National Guard, then this is viewed as a violation of the rule of law. If Yanukovych was ordered not to even dare to suppress "peaceful" protests, then the US National Guard was instantly ordered to disperse the raging crowd. But in Ferguson people also fight for ideals: they fight against corruption at courts (nearly all of the jurors were white, because blacks would find the white officer guilty), they fight against anti-humane policy of discrimination of second-class citizens, against racist white criminal oligarchs who run the US. Have you ever seen a black billionaire?

Russia may well appeal to US officials not to use force against the peaceful population of the United States. One should urgently convene the meeting of the UN Security Council on the situation in Ferguson, negotiate concessions and withdraw police and security forces beyond the zone of unrest in Ferguson.

In the US, there is still a generation of people, who were subjected to racial harassment 50 years ago. They used to study in separate schools, ride special public transport, use special hospitals, cafes and even park benches. Is it possible to believe that the black population of the United States has forgotten all this humiliation and discrimination? Has it sunk into oblivion? No, of course, not; protest sentiments are still alive, and they feed and grow on unwise economic and social policies of the current US administration. This policy leads to massive unemployment among blacks. As a result, black people tend to move towards the criminal sector of economy.

In 70 police stations from Connecticut to California, the amount of black detainees is ten times as large as the amount of white detainees, The USA Today wrote. In Ferguson's neighboring town, Clayton, about eight percent of the population are blacks, but when it comes to those who stay at detention centers of the town, there are already 57 percent of them. These imbalances can be seen even in "progressive" university towns, says the newspaper. In Berkeley, California, in Madison, Wisconsin, the number of black detainees is nine times larger when compared to representatives of other racial groups, according to FBI data. These deep disparities come as a consequence of economic and social policies that President Obama runs, the newspaper concludes.

In the US, they already call the decision of the grand jury not to criminally charge the white police officer "a slap in the face to Americans across the country" and "miscarriage of justice."

"The Ferguson Grand Jury's decision not to indict Officer Darren Wilson in the death of Michael Brown is a miscarriage of  justice. It is a slap in the face to Americans nationwide who continue to hope and believe that justice will prevail," Congressional Black Caucus Chair Marcia Fudge said.

"America is a police state, - Alexander Domrin, Doctor of Law (USA), Professor of Economics told Pravda.Ru. - When they teach us democracy or human rights from Washington, it raises rejection and resentment. The Americans do not need democracy anywhere, either in Russia or elsewhere. What they need is a banana republic, a client state, a drunken president like Yeltsin, they need a whore country. As soon as you become stronger - this is a nightmare for the US government. Whoever stays in power in Russia - a czar, Democrats, Republicans, Putin, Yeltsin - if you are strong, you are the enemy."