I recently had the chance to interview Paul Craig Roberts. I remember briefly, for the uninitiated, that Dr. Roberts was a senior official of the US government, economic advisor to the President during the first term of Ronald Reagan. It is to him the creation of Reaganomics, the economic policy initiated by Reagan to revive the US economy, then stagnant. Dr. Roberts was also a member of a secret committee of control over the CIA, set up to verify the information provided by US intelligence on the continuation of the Cold War with the Soviet Union. He has still now a profound understanding of the mechanisms of power in Washington and he's distinguished for his political analysis, often discordant compared with that of the official mainstream. 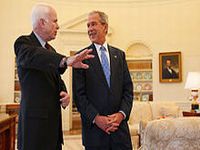 CC - In one of your recent articles [Here] you said that there is an "establishment" within both the Republican Party and also the Democrats, voted to preserve the power and hostility to any independent and authoritative presidential figure. How is it that we have come now to a situation like this and it seems to have originated many decades ago?

Dr. Roberts - Government's ability to tax, borrow, and print money gives government command over private resources. The beneficiaries of these resources can be, in certain circumstances the people. More often, the beneficiaries are the profits of private interests who are allied with government. As time passes these interests harden and become an Establishment. In the US the Establishment consists of the private interest groups--such as the financial sector, the military/security complex, the Israel Lobby, the extractive industries, and agribusiness--that write the laws that government enacts. The political party in-groups serve these interests in exchange for the large political campaign donations that elect the government. The two political parties in the US compete to be the whore of the private interest groups, because the majority party can do more favors and thus receive more benefits. When political outsiders, such as Jimmy Carter and Ronald Reagan, who can be tolerated as long as they are limited to governorships in States, seize the presidential nomination from the Establishment candidates and get elected, they jeopardize the establishment's control. For example, when the Democratic Establishment realized that Franklin D. Roosevelt would not survive his 4th term, they forced out his popular vice president, Henry Wallace, and installed the non-entity and easily controlled Harry Truman. They were able to use Truman to create the very profitable Cold War, which kept the military/security complex in the money for years.

CC - Do you think it is correct to speak of the existence, at the political level, of a sort of "Power Point generation"? That is, a set of people in charge whose mental schemes are extremely simplified, linear and in cascade, thus devoid of a marked ability to lateral thinking, over that of honesty?

Dr. Roberts - I can't answer for every country. In the US the present power consists of the neoconservatives. Their name is misleading. They are not conservatives. Their fathers came out of the Trotsky left. With the collapse of the Soviet Union in 1991, the neocons concluded that History had chosen the capitalists, not the workers, and that America was the "exceptional and indispensable" country whose right was to exercise hegemony over the world. This is akin to Trotsky's theory of world revolution, but in behalf of American capital, not the workers. The pursuit of this policy has defined US foreign policy since the Clinton regime. The lives of millions of people have paid for the supremacy of American control.

CC - Can we therefore say that the current US foreign policy is the product of this generation "in limited thinking"? If so, in your opinion how much are  the military leaders influenced?

Dr. Roberts - I do not think that the US is any longer capable of producing leaders. Government is simply something to be used by agendas. Military leaders benefit from mobilizations and war, as promotions are more rapid and officers retire at higher pensions. Once one reaches the rank of major or lieutenant general, private and Pentagon consulting opportunities abound as do military/security corporate directorships in the "defense" industry. The financial rewards make the generals complicit in the propaganda of ever present "threats," whether "terrorist," Muslim, Russian, or Chinese.

CC - Some people, here in Italy for example, believe that the current US policy is a consequence of the crisis of what they themselves call "American Empire". Here the term "empire" is used in an exception other than that which it is generally attached to, but it still indicates a form of authoritarian and freedom-killer government. What is your opinion about this?

Dr. Roberts - Europeans are responsible for the American Empire. Europeans bought into the Cold War, with the vision of the Red Army overrunning Europe and raping all the women as they did in Germany, and assigned their defense and foreign policy to Washington. Europeans have not had an independent foreign policy since WW II. European countries are vassal states of the American Empire and take their orders from Washington. No European "leader" is independent of Washington's control.

CC - I connect to the previous question and I would propose an analogy: the current social situation in the United States and, partially, in the Western world can be compared to that experienced by the old Roman Republic in its last times, with the murder of Caesar as a detonator of civil wars and catalyst of the break-up of the Roman Empire? How far we could go with this comparison?

Dr. Roberts - The American Republic was destroyed in the so-called Civil War. This war was about empire, not slavery. Lincoln himself declared that he would support slavery if it preserved the empire. As soon as the Union war criminals destroyed the South, they destroyed the Plains Indians, thus opening the West to exploitation by private interest groups.

CC - The recent mid-term elections have turned President Obama into the proverbial "lame duck." How do you think the last two years of the Obama presidency will run?

Dr. Roberts - Lame-duck thinking is passed. Obama represents the Establishment just as will his replacement. The Republican attacks on Obama are nothing but the Republicans' hopes that they will be the next whore for the private interest groups that rule America and that Republicans instead of Democrats will receive the rewards.

CC - In essence, what about the near future for Syria, Iran and Ukraine? Is Russia really the worst threat to humanity after Ebola?

Dr. Roberts - As all evidence shows, Russia has threatened no country. The Russian government is totally non-confrontational. Russia appeals endlessly to international law without effect. Washington's position is that Washington, as the "exceptional country," is above all law, both international and domestic. Washington wants to overthrow Syria because Syria is an independent Middle Eastern country not ruled by a Washington puppet. Ukraine historically is an integral part of Russia. By overthrowing the Ukrainian elected government and installing Washington's puppets, Washington brings troubles to Russia. Like China, Russia is a constraint on Washington's hegemony, and the destabilization of these constraints is the driving force of Washington's foreign policy. Washington's captive European puppet states accommodate Washington's drive to war with Russia and China. The war will be nuclear and will terminate life on earth.

CC - Finally, in your opinion what should we expect from the next US President? Whether it's Jeb Bush or Hillary Clinton or even a sudden outsider, what will change and what will not change in American politics?

Dr. Roberts - The only thing that can be expected from the next US president is more war, more murder, and more oppression of the gullible American people. People as uninformed and as gullible as Americans have no future. Americans are a dead people that history is about to run over.