Russia does not fight enemies - it devours them 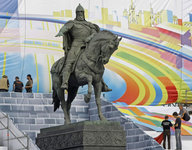 Pravda.Ru editor-in-chief Inna Novikova, political technologist Anatoly Wasserman and economic commentator Sayeed Gafurov discussed recent events in Russia and abroad: confrontation between Russia and the United States, deadly and mysterious Ebola virus and actions of the government and the Central Bank of Russia against the backdrop of anti-Russian sanctions.

"Not that long ago, at the UN General Assembly, Barack Obama said that three were biggest dangers: Ebola virus, Russia - the chief terrorist - and the Islamic State. In 1983, the Soviet Union was the empire of evil for the United States, and now we have come back to that again."

Anatoly Wasserman: "Well, clearly, the empire is getting very angry, when someone is trying to go against it. As they say, an animal can be very dangerous when it's being attacked. Throughout almost all of our history, Russia was dangerous from this point of view. When we are attacked, we defend ourselves. This is a typical mechanism of response to external challenges. Well-known historian and philosopher of history, Arnold Toynbee, described several of such typical mechanisms. In particular, for the Russian civilization, if it is attacked, it first tries to shrink away from an attack. But after a while, it dramatically expands, absorbs the source of attack and transforms it into a sources of its strength."

Sayeed Gafurov: "Obama's speech at the UN, I believe, was purely an election speech. They have elections in November, so the speech was purely of election character, because he is campaigning for his party."

A.W.: "Not quite. This is, of course, a campaign speech, but as far as I can say, Obama does believe that the Russian Federation is a threat to the established world order. He is actually right, because this order was created under the leadership of the United States of America, to meet US interests to the detriment of the rest of the world. Of course, people do not want to put up with such an order. But everyone is waiting who goes first. Russia can go first, and in this sense it is certainly dangerous to the American world order."

"In the past, there were two centers of power: the Soviet Union and America. And then, for 25 years, there was only America. The Americans are very displeased about Russia's return to the center of world politics. But why such a strange company - the Islamic State and Ebola virus?"

A.W.: "Well, I must say that the Ebola mortality is one of the highest. Chances of survival are significantly lower than chances of dying. Another thing is that the virus has become a real danger, in fact, only by virtue of market economy."

"Because one needs money for research?"

A.W.: "Exactly. When the virus appeared, experts unanimously said that, in principle, developing a vaccine against this infection was not too difficult, but no one would do it. Ebola is raging in extremely poor areas, where one does not make money on drugs. The spending on research and development will be very large, and there is not even a chance to cover the outlay."
"But it can always jump from poor to not so poor areas."

S.G.: "The problem is that a lot of Chinese people became sick, and they now return to China. It was primarily the Chinese, who were restoring Liberia after the civil war. They won all contracts. The Chinese do not advertise the data on cases of the infection, but they are already plentiful."

"Samantha Power told our representative that no one at the UN trusts Russia. Do you think the international public opinion is changing?"

A.W.: "As far as I understand, Ms. Power is engaged into what they call wishful thinking. As far as one can see from discussions of various online forums with the participation of many countries, the world trusts Russia at a much greater extent than it does the USA."

S.G.: In Europe, everyone understands. I was in Italy at a conference, where I spoke of fascism in Ukraine. They told me in response that they were aware of that. They realize that the Kiev regime is semi-fascist regime. The problem is that in Europe it is EU bureaucrats who make decisions rather than the elected authorities of the government. No one elects EU bureaucrats.

A.W.: In the UK, a system was formed a couple of centuries ago, by which the change of government does not lead to the change of the entire apparatus of ministries, they all remain the same. As a result, it is not ministers, but their permanent deputies, who possess basic knowledge and experience. It is these deputies who do most of the work."

"We have it too. Employees of the State Duma apparatus say: "MPs come and go, but we stay."

A.W: "Well, not only in the Duma, but also in the government. The change of ministers can not change economic policy. I believe that some day ​​a strategic decision will be made to proceed from libertarianism to reality. As experience of the last few months shows, the libertarian government is incapable of giving a clear response to economic sanctions and organizing such absolutely necessary things as import substitution and restoration of our own scientific potential. There are people who can do it, but the government apparatus can not design an appropriate program for the use of these resources.

"We have everything we need for a revival, except for economic leaders at the government level, who need to be changed. I do not separate the Central Bank from the government simply because they profess the same religion."

"Is the Central Bank a non-state organization?"

A.W.: "It is independent on the Russian Federation."

S.G.: "Our Central Bank is a mega-regulator that has a huge amount of authority."

"Let's get back to Ukraine now. On the territories, liberated from the Ukrainian troops and the National Guard, mass graves have been discovered with signs of tortures and organ removals. European and American media do not provide any reports about it, although OSCE observers see all this nightmare. Do you think there is any chance this information reaches the world community?"

A.W.: "There is a chance. That is, CNN and Fox News will never cover this under any circumstances. However, the formula - if CNN didn't show it then it didn't happen - fortunately, this formula doesn't work. There is the Internet that the West doesn't control in its entirety. There is Russia Today channel that has become the world's most popular of foreign channels. That is to say, in the United States, they watch RT more than they do the BBC, and in Britain, they watch RT more than CNN. We have enough resources for media offensive. The classical type of information blockade does not exist anymore."

Interviewed by Inna Novikova
Prepared for publication by Yuri Kondratyev