Iraq: Chaos, the legacy of the West

As the FUKUS Axis (France-UK-US) sets about tacking together an international force capable of attacking the forces of the Islamic State (outside the auspices of the United Nations Security Council, of course - the proper forum for discussion of crisis management), let us ask who is to blame for the situation? 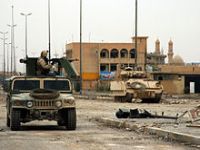 As I warned in this column in 2002, as the US-UK act of mass murder in Iraq was being planned, outside the auspices of the United Nations Security Council, as always, an attack on the State of Iraq precisely at that moment in time would be a monumental mistake in terms of strategy, in terms of security and in terms of international law. In 2003, the United States of America and the United Kingdom became pariahs in the hearts and minds of the international community as they launched an illegal attack against a sovereign nation, deployed military equipment against civilians and civilian structures, doled out contracts without public tender, destroyed a stable society and created the conditions for chaos to ensue once their troops were pulled out. As I said, let them never, ever again claim the high moral ground or dare to complain about the modus operandi of other States.

And look what happened. The Western interference in Iraq, and later Syria, provided the space that the Islamic State forces needed to operate. Now 30,000 strong, and loaded with cash, attracting religious fanatics from the four corners of the Earth, Islamic State has perpetrated atrocities, massacring civilians who do not fit in with their warped version of Islam.

Finally, after three videos supposedly showing the beheadings of two Americans and a Briton, the West swings into action, but using Islamic State as a means to enter Syria by the back door, arming the Free Syrian Army in the process and therefore indirectly interfering in the affairs of a sovereign State.

However horrendous, undesirable and unacceptable Islamic State may be, let us see some home truths:

Firstly, if the West had not interfered in Iraq, an extremely complex society living in peace, with its point of equilibrium well defined by its peoples, the country would not have lived through a decade of massacres, suffering up to one million people dead. Those directly responsible for these deaths are the countries which took part in the act.

Secondly, if the West had not interfered in Iraq, the country would not be crawling with Al-Qaeda operatives and Islamic State would never have been able to gain so much influence. The blame for the existence of Islamic State lies directly at the feet of Washington and London.

And fourthly, has anyone referred to the wholesale disruption of civilian life caused by this decade of living Hell, the responsibility of Washington and London? Thousands of people are displaced, including some 550,000 of school age. With half of Iraq's population under twenty years of age, who is going to pay for the sequels in the future, as children over one decade have faced severe disruption in their education programs?

Hundreds of schools across Iraq are dysfunctional. Around one thousand are occupied by internally displaced persons, sixty are being used by the Iraqi Armed Forces.

Another generation of Iraqi children have had their lives ruined by Western intervention in an illegal invasion which broke every law in the book, in which the invading forces committed war crimes.

While not wishing to justify the existence of Islamic State, the onus to pay for the damage they have caused lies at the feet of the USA and UK. Common decency would require an apology and a full and fair compensation package. Needless to say, this will not happen. Once a pariah...