After Foley, Sotloff. He had evidence "rebels" used chemical weapons?

The answer for failed foreign policy is not Kudos, but Karma. After James Foley, Steven Sotloff, who, it appears, had proof that the darlings of the West, the Syrian rebels, sorry, "terrorists", not only had chemical weapons, but used them, as I stated in this column at the time. Yet the West pressed ahead, blamed Assad...and now? 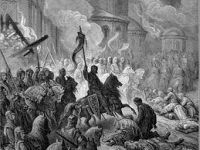 The payback for failed and bad management of foreign policy is not called Kudos, but Karma. This does not help the families of James Foley and Steven Sotloff, their deaths the result of foreign policy which favors deployment of troops over development and education. They died not because of who they were but because of the passports they carried. And sotloff had evidence the terrorists used chemical weapons, it appears (*)

One cannot imagine the despair and sense of loss that the families and loved ones of James Foley and Steven Sotloff are feeling right now, after ISIL claim to have beheaded the second US captive this afternoon. Perhaps these families could find some solace if they knew that this madness would stop here. Will it? Remember the payback for bad foreign policy is not Kudos, it is Karma.

Looking at the world we wake up in each morning, it is not a very nice place. Not only are we destroying species faster than we are discovering them, we are also devastating the habitat of animals and plants that deserve to live here alongside us, we are polluting our rivers, our lakes, our seas, our land and now, even space.

Quite apart from that we have in general terms failed to find a socio-economic model which can be successfully implanted and manage to fight off hostile attempts to destroy it, one that guarantees jobs, homes and comfort, educatuion and healthcare, the few that survive being rare exceptions. We have endemic cycles of economic recession, deep to the point of calamity, we have around 40 per cent of children living in poverty in some areas of countries which describe themselves as prosperous. If employment is a right enshrined in Constitutions, then Governments insult these Constitutions with policies which destroy jobs and livelihoods.

As for foreign policy, the horrific deaths of James Foley and Steven Sotloff are a reminded that US policy in particular and Western policy in general have failed in their imperialistic, militaristic, jingoistic, top-down, gung-ho, holier-than-thou approach to crisis management, many times of crises they themselves have created.

You do not hear of a  Brazilian journalist being beheaded. Or captured and tortured.  Or a Uruguayan, or a Portuguese, or a Finn, or a Luxemburger, or a Swiss. For some reason that must be.

The tragic losses of James Foley and Steven Sotloff are direct results of the US interventionism approach, favoring deployment over development and interfering in the internal affairs of sovereign nations.

The question is, to what extent is ISIL in Syria a creation of Western policy which yet again favored the arming, aiding and abetting of terrorist elements in Syria to destabilise the Government of President Bashar al-Assad, to what extent is ISIL in Iraq the consequence of the attempt by the dynamic duo (US and UK) to favor the most powerful group outside the Government (The Shia), forgetting that the Sunni had been in Government and kept there as the point of equilibrium for a reason? This is an old imperialist policy which was used by European powers to place in power a group which would never have achieved the position without outside help and which knew that if it didn't support the imperial power, it would fall.

It is totally unacceptable that citizens of the world cannot dare to get off an aircraft in a growing number of countries, that citizens have to think twice about visiting their capital cities to see an exhibition, for instance in London, where the terror threat is real. But what to expect when the Governments of these same countries under threat think nothing of arming terrorists and giving them the nod to topple a Government and destroy a society?

Do Barack Obama and David Cameron have the guts to watch videos of what the terrorists they backed in Libya did to women and children? Let me explain, and I hope they are reading this. They grabbed women from behind, and the lucky ones had their throats slit there and then. Others were raped then beheaded, others were beaded and then raped, others had their breasts sliced off. Little girls were gang raped, little boys too. Some were impaled on spikes. Copy and paste to Syria, same thing. Copy and paste to Iraq, same thing.

Horrific? Barbaric? Evil? Certainly, yes. But how can one then complain when the Government of the USA and UK is actively supporting terrorist groups on their own lists of proscribed groups, which was the case of LIFG in Libya, as I informed the Foreign and Commonwealth Office at the time, and received a very lame excuse in reply. Foreign Secretary Hague shouldn't have resigned, he should have been jailed.

So we see that in international politics, you reap what you sow. If your policies are enlightened and favor development, education and healthcare, such as Cuba's approach, such as Brazil's approach, such as Russia's approach (although Moscow does not go around clamoring to everyone what it is doing in humanitarian missions and boasting about how much aid it gives), the payback is respect. Kudos!

If you go around arming terrorists, saying it is cool to murder people if it suits your goals, empowering people on the fringes of society, even criminals, fostering coups, cavorting with Fascists, interfering in the internal affairs of sovereign nations, removing those who constitute the point of equilibrium, destroying societies, destroying electricity grids, destroying water supplies, destroying livelihoods, destroying families, then the payback isn't Kudos! It's Karma.

Instead of fomenting stability, understanding and promoting ethics and goodwill, Washington, London and a growing bunch of European would-be poodle States eager for some morsels thrown in their direction, are using foreign policy as a means to cater for the interests of the lobbies which control their Governments. The result is what we see in Iraq, Libya, Syria and now Ukraine.

And unfortunately in the homes of the families and loved ones of two young men who happened to carry the wrong passports in the wrong place at the wrong time. The fact that their deaths were so barbaric and cold-blooded makes it no less shocking when we see they were wholly impersonal and had nothing to do with the character and achievements of the victims. Maybe the families can find some solace in that, if they ever will.