By the logic of Barack Obama and the western canons of humanitarianism, anyone who is shocked by the slaughtering of babies, women and children in Gaza is a Nazi. Israel is democratic; Hamas is terrorist organization, so if you defend Palestinians you are a Nazi. 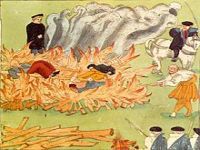 Maybe western politicians are barely cowards, but there are some brilliant singers like Roger Waters and movie stars, especially the Spanish ones, who recently took risks to sustain bleeding Gaza. As we remember, the courageous, tolerant and pacific people of Spain were punished ten years ago by a terrible attack in Madrid. Spaniards were the most hostile people in Europe to the surrealist and bloody war launched against Iraq. Yet the 'strange eventful' attack in the station of Atocha, attributed to Islamic terror, hit weirdly the people who were defending Arabic lives in Iraq and other Arabian places.

How wonderful for our benevolent western matrix!

This time Javier Bardem, maybe the best actor in the world, and his wife Penelope Cruz wrote a letter to the EU. They were seconded by world-famous director Almodovar, one of the last glories of the declining European intellectual left. It was to "condemn the bombing by land, sea and air against the Palestinian civilian population in the Gaza Strip... Gaza is living through horror these days, besieged and attacked by land, sea and air. Palestinians' homes are being destroyed, they are being denied water, electricity [and] free movement to their hospitals, schools and fields while the international community does nothing."

Well, for having written these emotional lines, Bardem and Cruz are sentenced to a symbolic death! A new witch-hunt is on the way, the same which we saw a few months ago with Gary Oldman who clumsily tried to defend Mel Gibson. The Orwellian agenda now identifies anti-Semitism and any critic of Israeli military smoothness.  The presstitute French media attacked the Spanish actors; then Jon Voight, a virulent and ridiculous néocon agent in Hollywood.

Speaking like a clergyman, a minister of the devotion to Israel and American crude imperialism, Voight uttered emphatically the following lines:

I am asking all my peers who signed that poison letter against Israel to examine their motives. Can you take back the fire of anti-Semitism that is raging all over the world now?

Is anti-Semitism raging all over the world (except of course in America)? As we know this accusation allows the Yankees to demonize the world and to punish it at any moment. Iran, France, Russia, Indonesia, anywhere! Dresden and Nuremberg for everyone, thank you captain America!

But by the way, who is murdering Jews in the world? As wrote once in Le Monde prestigious French historian Pierre Vidal-Naquet, the only country dangerous for the Jews is Israel. It is the only country where hundred of Jews can die violently each year.

And yet Israel has always laboured for a peaceful relation... it gave the Palestinians all of Gaza as a peace gesture. What was the response? The Palestinians elected Hamas, a terrorist organization, and they immediately began firing thousands of rockets into Israel.

The Palestinians elected Hamas? When, immediately in 1948 or 1967? All the murdered kids were throwing rockets since fifty years? And whose land Palestine was?

But let's forget that moody argument. Let's talk of money. Adds midnight cowboy, who attained celebrity by playing a male prostitute in the eponymous movie (this movie was labelled a fag's movie by John Wayne during his Play Boy interview in 1971), these fantastic lines:

You have been able to become famous and have all your monetary gains because you are in a democratic country: America.  Do you think you would have been able to accomplish this in Iran, Syria, Lebanon, et cetera?  You had a great responsibility to use your celebrity for good.  Instead, you have defamed the only democratic country of goodwill in the Middle East: Israel.

Ah, the money! The holy money! The American sacred buck! The roaring money, the holy Benjamin! How can you respect a country like Bhutan where you do not make money!

What should Bardem and Cruz do? Giving back the greenbacks? Or throwing rockets on the schools of Gaza to please Obama and Cameron and then show their western and democratic goodwill? And let us recall prestigious Nobel Prizes like José Saramago (he said Gaza was barely a concentration camp) or Gunter Grass who denounced Israeli and American menaces on Iran. Are they barbaric Nazi thugs too?

The hitch this time is tougher; and this is the time for a new imperialist witch-hunt. In the forties the great witch-hunt was produced and devised against the supposed communists (many of them as we know being Jewish) of Hollywood, now the witch-hunted is aiming any voice who challenges the royal hypocrisy and cruelty of the new world order.

But of course Israel has the right to defend itself at any price. And America has the right to invade, bomb, gun down, ruin and judge the peoples of the planet earth. And if you don't agree with that, you are a Nazi.

Thank you, Uncle Sam and Barack Obama, for devising such a seducing planet.