This interview was conducted during the stay of Ecuadorian President Rafael Correa in Brazil, by Beto Almeida (Brasil de Fato, Telesur, TV Comunitária), Emir Sader (Sociologist TV Brasil) and Valter Xeu, Editor of Patria Latina, media partner of the Portuguese version of Pravda.Ru. Here is a synopsis of Part 1 of the interview. 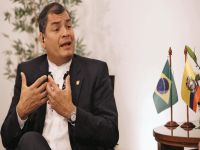 Rafael Correa: "The relationship of the people with the power in Latin America is experiencing a moment of historic change"

It was a pleasant 40 minute conversation with the Ecuadorian President who has been in power since 2007, and said he intends to run for reelection in 2017. Correa was in Brazil to attend the UNASUR meeting, which brings together countries of South America, with the BRICS, comprising China, Russia, Brazil, South Africa and India.

The Ecuadorian president, who defends the existence of laws that restrict media power, also believes that, at present, there is underway in Latin America a "conservative restoration", which aims to end the cycle of progressive governments that emerged on the continent in recent years.

Beto Almeida - Mr. President. Thank you for receiving us here. Bringing you the greetings of Brazil with the recognition of the giant role that Ecuador has played, both in Latin America and the world. We came here with three journalists: 1) Valter XEU of Patria Latina, which was born after a meeting with Fidel Castro and several journalists and intellectuals in Latin America. This presentation was followed by the exclamation of the President who then said: - "of course, Valter Patria Latina." 2) I, Beto Almeida, president of Community Brasilia TV, which has a collaboration agreement with Telesur and he also represents the newspaper Brazil de Fato, linked to social movements such as labor unions, and the landless. 3) Emir Sader of TV Brazil, which was created at the time of Lula. Now we give the word to Emir Sader.

President Correa - Muchas gracias. Firstly an embrace to Brazil with wishes for all the best of luck. Well, yes. I believe there is a change of season and a new cycle is approaching. Many progressives came to power in Latin America together with the debacle of national rights, which were then stunned by a great failure, which is connected to the failure of neoliberalism, and failed to adequately respond immediately. Here we have a change of seasons. These are profound changes. It is not only superficial reforms at stake. These are historical changes, with a major shift of power relations. It is a change from a bourgeois to a popular state. This change in Latin America has been consolidated through the governments of Hugo Chávez in Venezuela, Lula da Silva in Brazil, Morales in Bolivia, Bachelet in Chile, Tavares Vasquez in Uruguay, and the revolution in Ecuador.

However, you have to be careful. A new conservative cycle can try to reverse what has been gained. Much attention is needed. After the debacle that stunned them a new coordinate is now starting, and this at local, regional, and international levels. One must be very careful. I believe that Latin America will never return to past conditions, but it may lose much of what has been achieved. Much could be reversed.

But yes, there is a change of era, where the encounter between the blocks is a very important factor. Joining blocks is a good way to change the unjust order of the strongest, the order of hegemonic countries, financial capital, and worst of all in this context, the speculative financial capital. Take the case of Argentina. The United States could have broken it. Here there is also a need to ensure multipolar reality, which would allow greater participation, while avoiding at the same time, the eternal kind of danger that hovered over Argentina, for example. This requires the construction of solid blocks. This has to be done through blocks that can provide effective work. Brazil is great in itself, and could perhaps tackle the problem alone, but for countries that are small, and many are in Latin America, cooperation blocks, and the encounter between those blocks is required.
This is a reality that must be consolidated.
But for now, we would already be at the beginning of a new cycle? We'll have to wait to know the exact answer.

President Correa - We must be realistic. Alternating blocks are necessary and good, but here it is that not all countries have the BRICS bloc of progressive governments, and the same is true of UNASUR. We have to be vigilant, but it's a lot to be achieved through regional financial architecture that brings independence of traditional hegemony, what you are doing now with the BRICS, with its reserve funds to your new Development Bank, and the already established agreement between Brazil and China to trade and make transactions in their own currencies. The situation has changed a lot.

As has already been done it would not be an ideological union, but a union in practice, regardless of the ideological. However, this in itself is very important. It now follows that the work of political union has yet to be treated and in depth. What we have is a new consensus on new interests. With the BRICS has come a new financial architecture, which could prevent, for example, that all international financial transactions had necessarily to pass through the United States. BRICS is good. It can bring a less unjust reality.

Valter Xeu - Mr. President. During your term indices of health and education have grown a lot and there is a path towards eradicating poverty. How would you explain the case of Ecuador, a country with a small economy, when countries with greater resources failed?

President Correa - This is a political process. In the past, on this continent, Latin America has not developed, but the United States developed. We have a historical past, where more advanced civilizations were already here from the beginning, such as the Mayans, the Aztecs and Incas. Altogether it is a constellation of factors, but one of these factors is the class. We had a past where the social class of elites dominated us from the beginning.

But as for your question I can talk about the political process in Ecuador.
We had the dominance of a bourgeois state that we are moving to a popular state. The resources have always been here, e.g. oil, but let's say between the elite and the people had become, in the oil sector, a relationship of 4vs1, a relationship that is now leading to a ratio of 1vs4. In the oil sector we did renegotiations and had success with it. Nobody paid taxes. The resources have always been present, but are now used for the common good. So that would mean that it is a change in power relations, which now use for the greater good of the population and people power.

But here we find limits and external constraints. This is dangerous. We are attacked from all sides. Chevron could have broken Ecuador. We have to face restrictions imposed on us. It has here to do with excuses such as money laundering, terrorism, and others, but the rich do not bother with these restrictions, which apply to us but not to themselves. Look at the tax havens. Property rights...and the environmental goods, for example, they want to consume them for free. It is costly to restore the jungles. There are external pressures that require cooperation. In steps, we have to create an integration. We have to be efficient and create more resources. Socialism always spoke of the social aspects, but the efficiency was not discussed much. We now have to also mention the aspect of efficiency, together with the social aspects.