I have seen no mention in western media coverage of the Malaysian 17 air tragedy of a similar tragedy involving a Russian civilian aircraft on  4 October 2001 of Siberia Air Flight 1812, a Tu-154 en route  from Tel Aviv to Novosibirsk that was downed by a Ukrainian Su-200  that hit the aircraft at 36,000 feet with a loss of 66 passengers & 12 crew. [disbursement of nationalities was 38  Russian citizens & 40  Israeli nationals]. 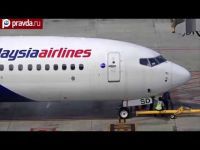 The Sochi air traffic controllers lost contact abruptly as the aircraft was over the Black Sea. A nearby Armenian aircraft reported seeing the plane explode and crash into the Black Sea at  13:45 Moscow time.

Ukraine denied any  involvement. While initially Russia considered Chechen insurgents responsible they later proved it was a Ukrainian S-200 engaged in military training exercises of  Cape Onuk [Chuluk] off the Crimean Peninsula.

A national day of mourning was immediately declared in Israel with flags flying at half staff and later a memorial was erected in the Ben Shemen Forest in Israel.

It was later determined that an S-300 had successfully shot down a Su-200 target drone , but another SU-200 overshot its drone and locked on to Siberia Air 1821 and exploded with shrapnel bursting 50 feet over the plane [just like the apparent  and televised shrapnel embedded in the  fuselage wreckage of the Malaysian Air Flight 17 readily shown on US and BBC and EU  television and, more abundant  written press coverage here in the US, London and the EU.

But the rush to judgment seems to me lacking details and the Ukrainian intelligence  authorities withholding the pilots messages to Ukrainian air traffic control and the failure to deny two Ukrainian Sukhoi fighters may have been accompanying the flight as it was re -vectored over territory disputed between Ukraine and 'separatists' favoring Russian  influence to be recognised in the region. [I find that  disputed area interesting in that as the USSR began to be undone by the All  Union vote in the summer of 1990 it was the miners in Donetsk who were striking for wage improvements but not to leave the Soviet Union].

It took two years for Ukraine to admit the fact that it had fired the missile and, begrudgingly, pay out USD$15Million [USD$200,000 per each of the 78 victims].

Ukrainian Defense officials said the SU-200 could not feasibly reach an altitude of 36,000 feet which in and of itself was not true as the range of the SU-200 was double that making such a claim nonsense on stilts. Similar unattributed claims are swirling around MH 17. The operational ceiling of the SU-300 according to western sources is well above 70,000 feet.

"How could credible reporting be available since all any viewers had to go on was brief film clips of passers-by that showed  the smoke of the plane's smoking ruins as no officials, Ukrainian or Russian,  were yet to arrive at the crash site which was still engulfed in a cloud of smoke  and numerous scattered ground fires. I specifically refer to the man passing by on a motor scooter which was shown on an endless loop for three hours by western media as it was You Tubed to the world. Therefore any such speculation was  simply de facto Mis en scène.

No Western news media had any  personnel at the crash site while they were speculating about the forensics and etiology of how the crash occurred.  To me as an interested observer that seemed hardly professional reportage by anyone's standards.

So for five days all that any interested viewers or readers have had access to is a deluge of speculation and blame without so much as a scintilla of substantive proof. That hardly serves to friends and family of those killed in this tragedy that, by any qualitative standard, is premature as the formal terms of the crash scene investigation are still being worked out.

It is apparent to me that so far the western media  have been in a rush to blame Russia exclusively for this tragedy beginning within three hours of its occurrence. CBS,NBC,ABC, MSNBC, Fox and the barely credible but airline obsessed CNN spent all day Friday beginning at 13:00 US East Coast  Daylight Savings Time to offer speculation  supported by  claims to anonymous "authoritative sources".

Time will tell if that is true.