NATO to spread wings of war due to 'eastern threat' 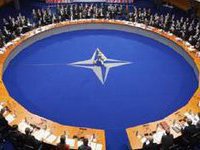 The meeting of the NATO-Russia Council took place in Brussels on Monday. The permanent Ambassador of Russia to NATO, Alexander Grushko, took part in the meeting as a Russian representative.

However, the parties failed to reach any agreement, the German publication Die Welt wrote.

On Tuesday and Wednesday, defense ministers of 28 NATO countries met for the last meeting before the September summit of the alliance.

It is expected to discuss the questions of military funding, as well as the deployment of the forces of the alliance in Eastern Europe.

"With its illegal annexation of the Crimea and the continuing aggression against Ukraine, Russia has created a new security situation in Europe," - NATO Secretary-General Anders Fogh Rasmussen said. In this connection, he urged to increase defense spending to the limit of two percent of GDP. The leaders of NATO member countries will make the adequate decision in September.

The participants of the meeting noted that Russia had been stepping up its defense order volumes during the recent years, while EU countries reduced defense spending over the same period by 40 percent.

"Now, when the recession in many countries ended, we can predict the growth in defense budgets," the United States Permanent Representative to NATO, Douglas Lute said.

The most discussed issue will be the defense of the allies on the eastern front in connection with the situation in Ukraine. The alliance has already enhanced air patrols of the Baltic countries, deployed ships in the Baltic and Black Seas, reinforced contingent in Poland and the Baltic countries and conducted military exercises in the region with the participation of six thousand troops, RIA Novosti reports.

"We consider it in the headquarters, whether it is enough, as several allies are worried about their security and the security of NATO. We already have plans for larger, more visible drills, we strive to improve threat-preventive procedures and crisis response plans. We are revising the abilities of NATO Response Forces, so that they could respond to any threat," a spokesperson for the alliance told reporters, commenting on the expectations of the ministerial meeting.

On Tuesday evening, the Ukraine-NATO meeting will be held. Acting Defense Minister Mikhail Koval will chair the Ukrainian delegation at the event. "They will discuss security threats and the situation in Ukraine after the elections, as well as our support for Ukraine, including the plans to reform defense and security sectors," a NATO official said.

On Wednesday, the Georgia-NATO meeting will take place. The main question of the possibility to grant Membership Action Plan to Georgia is out of the competence of the defense ministers. The question will be discussed at a meeting of NATO foreign ministers at the end of June.

Meanwhile, NATO Secretary General Rasmussen said that none of 28 NATO countries would recognize the results of the presidential elections in Syria. "The Syrian presidential election is a farce. The vote does not meet the international standards of free and fair elections. I am sure that no ally will recognize the results of these so-called elections," Rasmussen said in a statement.

On Tuesday, June 3 , Syria holds regular elections of the head of state. There are three candidates running for the post, including incumbent President Bashar al-Assad, as well as representatives of the moderate opposition, Hassan An-Nuri and Maher Hajar.