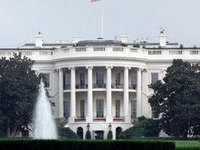 That's the dialogue that accompanies the final scene of the classic movie Planet of the Apes, starring the fine actor Charlton Heston.  As Heston's character (Taylor) finally escapes from Ape Society, he is seen riding a horse along a beach with his female, human companion.  A wide shadow appears in front of the horse Heston is riding and he is seen dismounting. He then falls to his knees overcome by grief, pounding the sand whilst uttering the dialogue above. The camera then cuts to the top third of the Statue of Liberty, the remainder buried in the sand.

News that General Wesley Clark, USA (Ret.) visited the Ukraine at the behest of the National Security Advisor there-and also a senior member of Ukraine's parliament-should be a cause for alarm. A nonprofit foundation was involved in this exercise (more below). There is a sense of open, almost joyful viciousness in all this pro-war, anti-Russian sentiments on opinion pages and television broadcasts. It is certainly racist and demeaning in tone. Such is the first step in convincing the public that the "transgressor" is equivalent to a retrovirus.

Partial expenses for the Clark and Karber expedition were paid for by the Potomac Foundation, a nonprofit foundation in Vienna, Virginia. According to three of its Form 990's, over the years it has received grants from the Smith Richardson Foundation, Soros/Open Society Fund, and Boeing. According to an official at the Potomac Foundation, some support is provided to Georgetown University, in particular, to Karber (the Chinese Tunnel guy). The official stated that the group does not have a website.

The Potomac Foundations also runs China Vitae as a charitable activity. According to China Vitae's website it "was founded in 2001 with two objectives: to raise the quality and quantity of English language, biographical information on China's top leadership; and to create a centralized repository of such information available to a worldwide audience." China Vitae is run by husband and wife team David and Susan Gries. David Gries is on the board of the Washington Institute for Foreign Affairs and has affiliations to the CIA and Georgetown University. Members listed on the China Vitae website have an assortment of affiliations to universities, corporations and the US government.

The Sith Order Returns from the Dark Side: The General who wanted war with Russia

According to Alexander Cockburn and Jeffrey St. Clair, writing in 1999, General Clark is a madman. "...anyone seeking to understand the bloody fiasco od the Serbian war need hardly look any further than the person of the beribboned Supreme Allied Commander, General Wesley K. Clark...A vain, pompous brownnoser, and the poster child for everything that is wrong with the GO (general officer corps)..."

In Wesley Clark: The Guy Who Almost Started World War III by Stella Jatras, "No sooner are we told by Britain's top generals that the Russians played a crucial role in ending the West's war against Yugoslavia than we learn that if NATO's supreme commander, the American General Wesley Clark, had had his way, British paratroopers would have stormed Pristina airport, threatening to unleash the most frightening crisis with Moscow since the end of the Cold War. 'I'm not going to start the third world war for you,' General Sir Mike Jackson, commander of the international KFOR peacekeeping force, is reported to have told Gen. Clark when he refused to accept an order to send assault troops to prevent Russian troops from taking over the airfield of Kosovo's provincial capital. The Times of London reported on 23 May 2001 in an article titled, 'Kosovo clash of allied generals,' that 'General Sir Michael Jackson [was] told that he would have to resign if he refused to obey an order by the American commander of NATO's forces during the Kosovo war to stop the Russians from seizing control of Pristina airport in June 1999. If General Clark had had his way, we might have gone to war with Russia, or at least resurrected vestiges of the Cold War and we certainly would have had hundreds if not thousands of casualties in an ill-conceived ground war"

Given that US President Obama has blessed the new Kiev government with legitimacy, America now seeks to stabilize the country with infusions of cash, arms and advisors. And that means that FIDO is likely underway there. Former special operations soldiers-now defense contractors-are on the ground in Ukraine, and so are active duty special operators/advisors perhaps out of US Special Operations Command. They are training/tutoring Ukrainian security personnel.

The execution of US national security/military strategy, operations, tactics are very predictable and based on using the impressive US Instruments of National Power to shape the target environment in America's favor. There are many simultaneous operations underway both covert and quite overt. In particular, military information support operations (MISO) begin with manipulating the public consciousness through cyber and meat-space means. That effort is clearly seen in the hyper-hypocritical statements on Russia's annexation of Crimea made by all top national security officials and members of the US Congress. The official words-of-war are gleefully reproduced by the mainstream media and assorted NGO's for a public seemingly unaware or uncaring of such serious international matters. There is little opposition to the anti-Russian, pro-war madness.

Then again American infrastructure is crumbling from sea-to-shining sea and so there is a solid rational that can be made for not caring about foreign affairs.

But Americans have seen this movie over and over again since the end of World War II. The script is the same, the bullshit propaganda/myth making is the same, the goals and objectives are the same, and the demonization of the adversary is the same. It is just so formulaic: the USA instigates and creatively destroys; Russia (or any opponent) attempts to counterpunch; China waits for the USA/Russia to commit suicide; and the rest of the world cowers, as they should, selecting to side with whatever one of the three giants can give them the best financial deal or "muscle."

At any rate, according to Joint Publication 3-22, Foreign Internal Defense, 12 July 2010, "...joint operations, involving the application of all instruments of national power, support host nation efforts to build capability and capacity to free and protect its society from subversion, lawlessness, and insurgency... An internal defense and development program (IDAD) program blends four interdependent functions to prevent or counter internal threats. Balanced development attempts to achieve national goals through political, social, and economic programs, allowing all individuals and groups in the society to share in the rewards of development, thus alleviating frustration. The security function includes all activities implemented in order to protect the populace from violence and to provide a safe environment for national development. The security effort should establish an environment in which the HN can provide for its own security with limited US support. Neutralization, a political concept, physically and psychologically separates an insurgent or criminal element from the population, thereby making threatening elements irrelevant to the political process. It includes all lawful measures (except those that degrade the government's legitimacy) to discredit, disrupt, preempt, disorganize, and defeat the insurgent organization. Mobilization provides organized manpower and materiel resources and includes all activities to motivate and organize popular support of the government. Mobilization allows the government to strengthen existing institutions, to develop new ones to respond to demands, and promotes the government's legitimacy..."

The ideals stated in the American Declaration of Independence, the US Constitution are currently being crushed by those addicted to warfare, power, money and a view that "they" are the anointed ones, the ones that know what's best for the masses. Great leaders-with all their faults-do not exist any longer in America, nor does a citizenry that vigorously debates and then instructs their representatives to compromise for the sake of the nation, not an ideology.  The efforts of George Washington, George C. Marshall, John Adams, Thomas Jefferson, James Madison, Abraham Lincoln and Franklin D. Roosevelt may one day be viewed by future historians/generations as folly.

The maniacs are in charge. "God damn them all to hell!"

John Stanton is a Virginia based writer. Reach him at [email protected]