Loose NATO may rise against Russia with Ukraine's help

April 4th marks the 65th anniversary since the creation of the North Atlantic Alliance (NATO) that was established to counter the "Soviet threat" after the Second World War. Today, the alliance consists of 28 countries, although only two or three states have combat-capable armies. Does the alliance have a future? 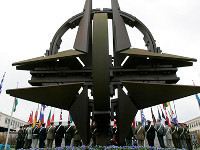 After the collapse of the USSR and the "Eastern bloc" in the face of the Warsaw Pact, NATO, despite promises, began to expand to the east. In 1949, the alliance had 12 member countries; at the peak of the Cold War - 16; by 2009 - already 28 (Albania, the United States, Belgium, Bulgaria, Estonia, Spain, Holland, Croatia, Iceland, Italy, Canada, Greece, Lithuania, Luxembourg, Latvia, Norway, Poland, Portugal, France, Romania, Germany, Slovakia, Slovenia, Great Britain, Denmark, Czech Republic, Turkey, Hungary).

Even a cursory glance at the list is enough to understand that only two or three countries are capable of waging war. All the rest are persistent in their unwillingness to participate even in peacekeeping operations (Germany). Yet, decisions in an alliance should be made collectively, after all. Therefore, the discussions of the campaigns that the alliance conducts outside Europe have been rather scandalous lately. The wars that NATO wages are related to establishing control over specific regions, control of sources of raw materials and military-political pressure on those who disagree with interests of NATO members. The interests of these 28 countries are, of course, significantly different.

"NATO today is a loose political-military organization with extremely poor results of combat use," Alexander Fomenko, an independent political analyst, told Pravda.Ru. No significant progress has been reached either in Afghanistan or Iraq. The Americans can count only on themselves in NATO, and perhaps on Western Germany, and it does not go about war here. The French tend to gain autonomy in military policy."

In addition to poor governance, NATO suffers from the lack of ideology. Nobody wants to die in an "unjust", as the Americans say, war in Afghanistan. Other wars show that the morale of the troops is pretty low. This was already evident in Yugoslavia in 1999, when the alliance practiced bombing tactics, rather than ground operations. The experience obtained in previous campaigns in Asia convinced the alliance that Americans lose in a guerrilla warfare.

However, after the Ukrainian events, the Western press broke a series of articles about the "renaissance of NATO," because here she is, Russia, "threatening" Western values. In fact, it was nothing more but a financed propaganda action to increase the military budget of the United States and NATO countries (the military budgets have significantly lost weight lately due to the crisis). Those who feed on that money, i.e. generals themselves, became much more active too.

"We need to increase military spending of member countries to demonstrate the commitment of the members of the military alliance to what it calls the protection of its allies," U.S. Secretary of State John Kerry said on April 1 at the summit of NATO foreign ministers in Brussels.

Grushko explained that the countries that speak about the lack of security and fear Russia's possible military intervention indirectly recognize the fact that they have missed a lot in terms of protection of human rights of the Russian-speaking population. "Instead of sending fighters to the Baltic countries, it would be better if the EU and NATO convinced the governments of Estonia and Latvia to start substantive work to eradicate the shameful phenomenon of being stateless, when people are deprived of citizenship and political rights just because they speak Russian," said the Russian permanent representative.

According to Alexander Grushko, NATO's expansion process ran its course a long time ago. "It proved that it weakened security and did not erase the dividing line, moving it to the east, bolstering the psychology of frontline states. We see that the countries that join NATO, start to demand additional guarantees and additional measures," said the Russian diplomat.

The above-mentioned summit considered the Ukrainian conflict and actions of the alliance on the post-Soviet space. The participants of the summit spoke about the need to intensify the patrolling of airspace of the Baltic countries, as Lithuania requested. It was also said that NATO needed to buildup troops in the areas that border on Russia. Poland stated that one needs to deploy two 10,000-strong armored brigades on its territory, although the country borders on Russia only in the Kaliningrad enclave.

As for Ukraine, it was said that NATO and Ukraine would be strengthening cooperation to implement reforms in the defense sector by strengthening the defense ability. The Verkhovna Rada passed the law about the admission of units of the armed forces of other states on the territory of Ukraine in 2014 for their  participation in international exercises. This year, it is planned to conduct eight of such exercises. This is the initial stage of Ukraine's integration into NATO, which looks very similar to what happened in Serbia: the country is now ready to join the alliance, despite protests of the population.

Nevertheless, experts do not believe that "Ukraine may serve as a springboard for NATO's renaissance. "NATO could rise with the help of Ukraine if Ukraine had the military industry, the real army and modern combat experience. Ukraine has none of that," said political scientist Alexander Fomenko.

It was also announced that NATO was terminating cooperation with Russia. However, if we take a closer look at that, it becomes clear that the alliance was cooperating with Russia closely only on Afghanistan. The damage from this decision is therefore symbolic, as it designates a negative development of relations between Russia and NATO. Has it ever been positive, though?

The foreign ministers wrote that NATO was going to develop "smart defense" during the coming years, although the alliance has never had defensive wars. "Smart defense is a specialization of NATO countries on specific areas of military security, based on the appropriate level of qualifications and preparation of a particular country and its agencies to reduce costs on overall defense," Igor Korotchenko, the chief editor of National Defense magazine told Pravda.Ru.

To put it in a nutshell, this is nothing more but co-operation in various fields, for example, in patrolling, logistics and missile defense. Smart defense also includes high-precision weapons. "We have such elements - we have high precision weapons (S-500, new air-to- air missile K-77m - ed.) and means of information warfare, - Boris Yulin, historian and military expert told Pravda.Ru. - But the problem is that we lost too much time, we do not have sufficient power of the military-industrial complex, so we have new technologies represented in fairly limited numbers. So the Russian army today is still far away from normal combat readiness."

Thus, it is not NATO, but the US Army that opposes the Russian Armed Forces today.  The U.S. Army is superior to the Russian Army in many respects. Secondly, Washington will no longer accept unstable post-Soviet countries in the alliance that ask for guaranteed protection against Russia. Thirdly, the Americans will not directly fight with a country that can destroy them in a nuclear war.

Moscow has learned a good lesson. Now Russia eyes military ties with China, to which Russia will undoubtedly sell the promised S-400 systems. Most likely, Russia and China will join efforts for military drills as well. China is not the partner, whom Russia can trust unconditionally, but if the West burns bridges, Russia will go for it.

"The world war is basically underway already. That is, the countries that were running independent policies, aiming China, rather than European countries, have been, in fact, destroyed. Libya, then Syria and Sudan - Sudan was selling fuel mainly to China, so the country has been torn into three parts. The war is on now, NATO has been strengthening control over strategically important areas, taking large sources of raw materials under control. I do not know whether there will be a direct military standoff between Russia and NATO, but I think this is not likely," Boris Yulin told Pravda.Ru.