U.S. President Barack Obama tried to convince the King of Saudi Arabia to coordinate actions in the oil market to reduce world oil prices, the main source of Russia's export revenues, and "punish its behavior" in Crimea. Experts estimate that if the prices are reduced by as little as 12 dollars per barrel, the Russian Federation will lose $40 billion in revenue. There has been a precedent, because this is precisely how the USSR collapsed. 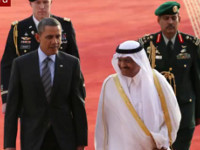 Before Obama's visit to Saudi Arabia, the U.S. media was discussing options of "punishment" for Russia with sanctions for its "behavior in Crimea." The first option was proposed by an American financier George Soros. According to him, every day the U.S. could offer for sale 500-750 million barrels from its strategic resources (SPR) estimated at 700 million barrels, which should lead to the decrease in world oil prices by about $10-12 dollars per barrel. Immediately after the formal reunification of Russia and Crimea, the Obama administration gave orders to sell 5 million barrels of oil from the SPR.

However, after two weeks of discussions, U.S. analysts agreed that the effect of such actions will be short-lived, and squandering suitable strategic reserves of the country was not a good idea because you never know what might happen. Another idea immediately followed - to convince Saudi Arabia to increase oil production. Steve LeVine spoke about it in detail.

He suggested adding a few million barrels from Saudi Arabia to the oil from the U.S. reserve, and because oil prices are determined by profitability, the cheap oil in the range of 2-3 million barrels per day could significantly derail the price. Allegedly, Obama traveled to Riyadh to discuss this option on March 28, said the analyst.

Russia receives approximately 70 percent of its export revenue from oil and gas, so even this kind of fall would mean a significant impact, LeVine wrote. He referenced the expert evidence that if there is a fall in price by only $12 dollars per barrel, Russia would lose $40 billion revenue in the budget. According to LeVine, such talks between the United States and Saudi Arabia are already underway, as Prince Turki bin al-Faisal recently noted that the modern oil market was global in nature, and one country cannot affect its stability.

There is a precedent of such joint action that caused the collapse of the USSR. In 1985, the Kingdom has dramatically increased oil production from 2 million to 10 million barrels per day, dropping the price from 32 to 10 dollars per barrel. USSR began selling some batches at an even lower price, about $6 per barrel. Saudi Arabia has not lost anything, because when prices fell by 3.5 times the production has increased five-fold. The planned economy of the Soviet Union was not able to cope with falling export revenues, and this was one of the reasons for the collapse of the USSR.

Has Obama made a deal with King Abdullah? "No, I'm pretty sure he has not," Sergei Demidenko, an expert of the Institute of Strategic Studies and Analysis told Pravda.Ru. "First of all, the situation in the 1980s and the current situation in the oil market and general political situation in the world are very different. The Saudis are no longer dependent on the United States, they are relatively independent, they have their own groups of influence both in Congress and the State Department, and they can already influence the U.S. policy," said the expert.

"The global economic crisis has not been canceled, it continues to have a negative impact on the Persian Gulf, so Saudi Arabia is unlikely to do this," agreed Yelena Suponina, head of the Center of Asia and the Middle East at RISS.

Indeed, as the largest producer of oil, the country would lose a great deal in the event of price reduction. Now, the OPEC countries that include Venezuela and Angola will not allow tripling production. In addition, the alliance relations have been severely marred lately. The King called them "unreliable" because of the U.S. position in Syria. Moreover, he is angered by Obama's "flirting" with the Iranian leadership and unlocking sanctions against it. Interestingly, the President of the United States has severed diplomatic relations with Bashar al-Assad before the visit, perhaps it was a gesture of reconciliation that indirectly confirms Obama's intentions.

But it is not so much about politics as it is about the economy.  Merrill Lynch  estimated that the Saudis should keep global oil prices near $85 per barrel to avoid a budget deficit. Now the prices are kept at the level of $105-110 dollars per barrel. It would seem that a price reduction of $12 dollars is possible, but the situation in Saudi Arabia is not easy, said Sergey Demidenko. "First, there are not that many readily available deposits, and there is a need to develop more complex fields. This automatically increases the cost of a barrel. Moreover, the country is now facing an unstable social situation and needs a serious financial cushion to solve social problems. The Kingdom remains an island of calm, but only because they push their opposition out of the country to the outside edges of global jihad, and this is a boomerang that sooner or later will come back to them. To ensure that the people do not follow the extremists, they must be bribed. This is why Saudi Arabia will not agree to this plan, it's quite obvious," said the expert.

Nevertheless, analyst Nicholas Cunningham of Oilprice.com wrote that Obama was likely to hold on to the strategic reserve card and play it if Russia deploys wider activities in Eastern Europe.

"We cannot rule out this scenario, and OPEC is not the guarantor of high oil prices. A reasonable government should be prepared for this," told Pravda.Ru Yelena Suponina. "The best solution is to diversify the economy rather than rely on oil and gas exports alone. Rumors of an impending decline in oil prices have been floating around for five years. It is a method of psychological pressure, such methods are often used in politics. These rumors are designed to annoy major oil and gas miners, and this factor is used in the psychological war against Russia. Since Russia is acting very confident in the international arena, the West will try to apply if not the oil weapon, then at least rumors about the possibility of its application. It fits into the logic of contradictions existing in the relations between Russia and the West, and we have to be ready," said Yelena Suponina.