Like many of you I suppose, I too have been scouring the News for information on Ukraine and the ensuing issue(s) there.  Ignore the Doomsayers with their prophecies of WWIII, filter out the anti Russian rhetoric of the CNN / VOA garbage and concentrate on what is left. I've spoken to friends in both Russia and the Ukraine and tried to gauge their thoughts and reactions as well. 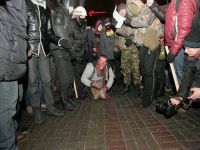 The reality of the current situation is as plain as the nose on your face - if you will look - the "West" is impotent to prevent Russia from annexing the Crimea. Russia has the moral high ground of International Law to support it's position; it also has precedents like Kosovo to point to which demonstrated the West's willingness annexed and set up a "new country" supposedly to support a minority group in a country which had a majority in a certain area. [Putin warmed at the time that there would be repercussions for this move - well now you see it]. In this we see the hypocrisy of the West's position clearly outlined. Look at the buffoon Kerry stating that "you just can't go invading a country on some trumped up pretext".  Play that again! Where was this guy when the US invaded Iraq?  When Colin Powel admitted to the UN that there were no WMD - it was all a lie?

Seriously, can you believe the nonsense that the West is putting out - it is OK for them to go around the world, organising regime change; even do it in Ukraine and oust a democratically elected leader; but don't dare anyone else try to interfere in their grand game of geopolitical chess. The elected leader of the Ukraine [and still the only elected leader of the Ukraine] had agreed to the terms and conditions of the EU lead delegation of 21 February; he had agreed to early elections, but the criminals in there now, couldn't wait for that because there was no certainty that they would get elected!

The West is scrambling to put together a brave consolidated face while having incredibly damming evidence come out from a leak phone call between the Latvian cabinet Minister and the EU Cabinet Minister that the new regime paid for the "snipers' to fire on both Police and demonstrators. A doctor who attended the dead [because they were all kill shots from the snipers] confirmed the conversation of the Latvian Cabinet Minister and said that the calibre of projectile used was not of Russian/Soviet construction.

This is Russia's back garden - the people are Russian and want to remain Russian, as they were before stupid Ukrainian Khrushchev gave the Crimea to the Ukraine like some blood money for what the Jewish NVDK did to the Ukrainian people in the 1930's and blamed it on Russian Stalin.  Europe knows this and Europe also knows that Russia supplies them a large portion of their natural gas. 4 puppy states, Czech Republic, Hungary, Poland, and Slovakia went running off to the US to ask for US gas exports to be increased for Europe. Little wonder - they are the most vulnerable of the European states next to the Russian bear. But it is not Russia that they need fear - no, they [especially Hungary] need to look at what the IMF/World Bank is doing to enslave Europe. Hungary needs be very careful as they are most probably next cab off the rack after playing with money.

Ukraine is suffering from IMF Riot - look it up on Google, I actually wrote about it in an earlier article. The IMF/World Bank is subjugating the Ukraine to enslave them with massive debt and through that, to totally control the country and it's people. Stupid Ukrainians are too filed with notions of Democracy and Freedom to understand what is happening to them. It will be too later once the debt is set - forget Greece, and the PIIGS group - Ukraine will set new records of deprivation.

Anyone who cannot see what is happening here is either blind or just plain stupid. Look at Georgia - same scenario, same players. Neocon group. One bit of news I picked up was that both Putin AND Obama were surprised by the events in the Ukraine. This indicates that although the "West" organised it, it was not State department sanctioned. Who then - who was behind this coup d'état.

In our part of the woods, we have a primary producer who has run a series of stupid adverts on the TV - the catch phrase is "ah, McCain, you've done it again".  Yes, we have the Necon Fireman - the Fireman of Ukraine, and, Syria, Georgia and.... Wherever he goes, revolution follows. I am amazed that the Russians haven't tracked him better and therefore gleaned information about his "business trip" to Ukraine.  It has been reported on US news that American Businessmen have poured some five billion dollars into "fixing" Ukraine. Do you think they just give away that sort of money?  No, they get their Fireman to follow and set the place ablaze so that from the chaos, they can steal the jewels.

Putin said that anyone who spent as much time in the Hanoi Hilton as McCain did would go mad - just goes to show he is right!