It has not been that long after the burial of the victims of the Maidan, and the recent history of the Ukrainian tragedy is already being rewritten by the supporters of Kiev junta and biased Western experts. They are doing it without any regard to the generally known facts and witnesses. What myths are used in the information war? 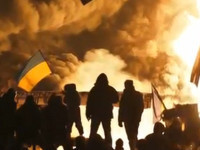 Myth 1: President Viktor Yanukovych is illegitimate. The issue of the legitimacy of Yanukovych is considered by a British political scientist and researcher of fascism Roger Griffin in simple terms: "from the moment when he ordered security forces to open fire against demonstrators, he ceased to be the legitimate president. Then he escaped from the country and created the so-called power vacuum," the expert told Pravda.Ru.

First, the United States shot at protestors several times, but no president became illegitimate because of it. During an FBI operation in 1993 by order of President George Bush a religious community "Mount Carmel" in Waco, Texas was shot and burned. 79 people, including three children, were killed. Second, Yanukovych gave the opposite order - not to open fire, which is why he is now in hiding. Third, the president did not escape, but as he claims, went on a business trip to Kharkov, and probably has a supporting document that can be presented to the court.

Myth 2: the opposition takeover was not a coup. "Yanukovych's lavish lifestyle (reminiscent of Ceausescu), corruption of his regime, the inability to solve problems in a democratic way and find compromises took away his legitimacy and provoked the seizure of power by the opposition," said Griffin. But Yanukovych was elected by the Ukrainian people and the election results were recognized by the international community. There was no impeachment procedure described in the Constitution of the country, including the Constitution of 2004. Therefore, his removal from power was illegitimate.

Myth 3: Russian citizens in Ukraine are not threatened. The U.S. ambassador to the UN Samantha Power said that there was no evidence that ethnic Russians were in danger. In contrast, the new Ukrainian government has given priority to reconciliation in the country and the participation of all political forces in its life. She said that President Turchinov, the Interim President, has clearly stated his opposition to any restrictions on the use of the Russian language. However, President is not the legislature, and the Rada has not cancelled the law on de-Russification of Ukraine.

Now let's talk about threats. Blogger Arsen Avakov (also known as the acting Minister of Internal Affairs of Ukraine) the next day after the establishment of "the order Kiev has never seen before" admitted the following. In the capital and its suburbs, it turns out, there are groups of people in masks, helmets, armed with batons, firearms and traumatic weapons. They identify themselves as representatives of the "Right Sector," "left wing ", "Freedom" party, "Self-Defense of the Maidan." They act on their own, stopping and checking everyone who looks suspicious to them, and make decisions on the basis of revolutionary expediency. As a result, there were cases of arsons, looting, robbery, Pravda.Ru correspondent in Kiev reported. Revolutionary expediency of Sashko Biloi who received a Ukrainian award for killing Russian soldiers in Chechnya is very obvious.

Myth 4: Ukrainians should integrate Russians. "The integration of Russian-speaking Ukrainians in the nation is a major issue that must also be addressed through a democratic dialogue and through democratic structures (as it was with the French-speaking Italians)," said Griffin, demonstrating a complete ignorance of history and detachment from reality. In fact, the Ukrainian nation is a concept brought to life by the Soviet national policy. "Historically it is correct to speak about the Great Russians in relation to the current Russia and Ruthenia, and Little Russians in relation to those who are now called the Ukrainians. Even after Rus has split into sovereign principalities, the cultural, political, mental, religious, and community mentality has remained. It was strong for several centuries, until the 15th century. Since late 15th - early 16th century the branches began to gradually diverge - the West-Russian and East- Russian, but in the framework of an all-Russian culture, all-Russian view. "It was formed in both parts of the divided Russia - Moscow Russia and Western Russia absorbed by Lithuania, and then - Poland, Rzeczpospolita. All-Russian consciousness was cultivated based on literature. If we talk about the western lands, it was polemical church literature, and if we talk about Moscow Russia, it was political tracts. This all-Russian consciousness allowed holding Pereyaslavska Rada," told Pravda.Ru Andrei Marchukov, Ph.D. (Institute of Russian History, Russian Academy of Sciences). The division between Russian and Ukrainians was created under Lenin and was consolidated by Belovezhsky agreements, the expert added.

Myth 5: Russia is the aggressor, it has already occupied Crimea. Here is an excerpt from the statement of the U.S. Embassy: "Russian troops moved out of their bases to seize political objectives and infrastructure in Crimea." Let's write if off to a misunderstanding. For example, Euronews correspondent asks a soldier in unmarked uniform: "Who are you?" The answer: "I am Russian." "Ah, you are from Russia!" concludes the Western correspondent. He has no idea that this is how Crimeans refer to themselves. According to Defense Minister Sergei Shoigu, "publication of photos and videos with military equipment with Russian military plates is a provocation." Commenting on the video, in which the military say they are Russians, Shoigu said: "This is complete nonsense." Russian troops are present in Crimea as a military contingent located not only in Sevastopol, but also in other places of deployment, according to the agreements between Ukraine and Russia.

Myth 6: There is a democratic government in Kiev, and there are no fascists in power. The Rada is operational and is issuing laws. "The Rada is the most representative institution in Ukraine, and recent legislation has passed with large majorities, including from representatives of eastern Ukraine," says the U.S. Embassy website. However, those in power are units from Maidan, and their roofless actions are described above. As for the Rada, the deputies of the Party of Regions voted as they were told in the Verkhovna Rada of Ukraine because of threats to their lives or the lives of their loved ones. This is the opinion of the chairman of the Kharkiv Regional State Administration Mykhailo Dobkin expressed during the congress of deputies of all levels of the south- eastern regions of Ukraine and Crimea. "They burn houses, cars, take family members hostages. They hold deputies' children hostage and threaten to cut them into pieces if the deputies protest," told Pravda.Ru MP from the Party of Regions Vadym Kolesnichenko. Furthermore, even the BBC reported "fascist patrols" in the streets of Kiev, publishing video clips from there.

Myth 7: International law does not provide for the use of force in response to the regional authorities. "It's odd that when the West goes against these (international) rules, then that's fine and good, but when Russia does it, it is an illegal aggression. This, in my opinion, is double standards. If the local authorities call on the Russian authorities and say that for us, the situation is very complicated, that the extremists are trying to organize a local orange revolution, in my opinion, this is an emergency. In this situation I think that Russia has the right to bring its troops and should do it," told Pravda.Ru. a Norwegian political scientist.

But the main objection is that Russia has not applied force, and if it has to do it, not at the request of the regional authorities but the legitimate president Yanukovich, the West will consider it illegitimate (see Myth 1). The unfortunate loop of misunderstanding is closed.