Obama and Hollande hug each other as world's gendarmes

French President Francois Hollande arrived in the U.S. on an official visit. This is the first visit of a French leader to the country since 1996. Previous President Nicolas Sarkozy never visited the United States. Both Hollande and Obama are competing to show close ties between the two countries. 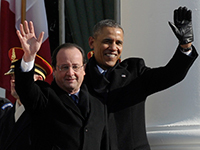 Hollande's visit to the United States became the first official visit of the head of the French state in the last 18 years. French site Rfi reported that France was presented in Washington as a longtime ally, France was a country sharing common values ​​of democracy and human rights with the United States, and that the French Revolution inspired the American Revolution in the 21 Century. However, in the U.S. history textbooks the situation is presented in the opposite way, where the American Revolution influenced the French.

Barack Obama honored his colleague as he would a very close friend and gave a gala dinner at the White House. He said that the Americans loved all things French - movies, food, wine, but most of all they loved their French friends who were next to them in the fight for their freedom for 200 years. Hollande responded that the relations between the two countries have reached an exceptional level of intimacy and trust because the parties shared the "universal values" of freedom, democracy and respect for the law, the French president said. He added that the French loved the Americans, although they rarely said it, and that the opposite was true as well.

Why this passionate manifestation of love, previously uncharacteristic for the presidents of both countries? The first thing that should be noted is that Obama owes Hollande for the undeniable support of his positions on international issues. But the converse statement is also true. Obama supported the invasion of France in Mali and the CAR, and this was done without the approval of the French Parliament. The presidents stressed that Africa from Senegal to Somalia was the most notable theater of action of their new partnership. "France is now positioning itself as a political leader in Europe and is focused on the strengthening of the Euro - Atlantic solidarity," Eugenia Obichkina, professor of international relations and foreign policy of Russia at MGIMO told Pravda.Ru. "Unlike other French presidents who were not only allies but also the opponents of the United States, Hollande absolutely refused opposition. He is very accommodating for the U.S. because he constantly demonstrates his willingness to be an unconditional ally. He is ready to play the role of the "world policeman" that is difficult for the United States to perform alone. Other West European allies of the U.S. are not inclined to carry this burden for the military and other operations outside their borders. A good example is the operations in Mali and the Central African Republic. This is why Obama is so welcoming towards Hollande," said the expert.

Second, the two presidents were the only ones in the world to insist on a military intervention in Syria until the very end. French newspapers wrote that Obama let Hollande down when he refused to strike at the last moment and left Hollande, an ardent advocate of intervention in Syria, to defend himself against critics with his back to the wall. The French media assumes that Obama wants to apologize for calling Hollande along first, and then abandoning him mid-way. "Obama has not let Hollande down," said Eugenia Obichkina. "The French diplomacy at the outset actively announced that it would support the most active intervention, including a strike. Obama verbally had roughly the same idea." But France and the United States have not agreed on what would happen after the strike and whether it was necessary just for the sake of deterring Assad," the expert explained. In addition, the operation did not receive much support of the French and American public opinion and was poorly considered from the economic point of view. "Hollande surprised me," the expert added. "In his speech he gave credit to Obama and himself for resolving the conflict in Syria while in fact it was a victory of the Russian diplomacy.

Third, Hollande is likely grateful for Obama's support during the 2012 presidential election. Obama did not want the victory of the then head of the Republic, Nicolas Sarkozy, whom Washington called "hateful." This was reported by François Heisbourg, President of the Foundation for Strategic Research, quoted BFMTV. Indeed, Sarkozy was never honored with an official invitation to visit Washington. Barack Obama, who visited Paris in June of 2009, refused to dine at the Elysee Palace. This was because Sarkozy criticized the U.S. intervention in Iraq and helped Russia solve the South Ossetian conflict not in favor of Georgia. However, Eugenia Obichkina believes that Sarkozy had "very good relationship" with both Bush, both senior and junior, he met with them privately and brought France into the NATO military organization."

Fourth, unlike Chancellor Angela Merkel, Hollande did not protest during the NSA scandal over the revelations of Edward Snowden. Obama should be grateful to him for this. The president of France at a meeting with Obama said that the mutual trust was restored, and it was based on the respect for the countries they represented, and respect for privacy, personal information, as well as the fact that any person, regardless of technological progress, can be sure that he is not an object of spying. In response Obama has not confirmed that France would be excluded from the list of objects of the NSA surveillance. "Why fight with the closest ally?" commented Eugenia Obichkina. Everyone knows that everyone is wiretapped. They are allies, but they do not have identical positions. Take Sarkozy's position on Iraq, for example. For the reasons of real politics, Hollande chose not to exacerbate the situation. Besides, Obama apologized. Confrontation would bring them more harm than dividends, the expert said.

Fifth, economic interests are intertwined here, as nearly half a million of jobs were created by French companies in the United States, and vice versa.

Hollande is hoping to restart the French economy through American business. "Economic bilateral cooperation is significant, but certainly we are talking about political cooperation, that the Cold War was won by West, the United States and the European Union,"   says Eugenia Obichkina. It is their civilizational alliance and they will always be closer to each other than third countries, even if France and Russia develop a special relationship for reasons of continental security. But even in this regard, France will always rely on the United States, for example, for reconnaissance satellites, because the Americans have 50 of them and Europeans have one. It will be decisive in the information war that is now unfolding, summarized for Pravda.Ru expert Eugenia Obichkina.