Can other countries bomb USA like it bombs Somalia and many others?

The missile attack of U.S. drones on Somalia that came out of the blue over the weekend showed that U.S. " doctrine of exceptionalism" allows to violate international law, bomb foreign territories and kill suspects without trial. Accordingly, other countries have a right to bomb the U.S., haven't they?

The question above was asked in the comments to the news story about the missile attack that was posted on CNN website. According to the Associated Press, it was warlord Sahal Iskudhuq, who was eliminated in an air strike on Sunday. His driver was killed along with him. However, according to other sources, the United States is still unable to find out whether the militant leader was destroyed or not, a U.S. military official told CNN. Terrorist group al-Shabab claimed responsibility for the attack on Westgate shopping center in Nairobi on 21 September 2013. At least 67 people were killed, more than 200 were injured in the attack. As extremists explained, the attack was a response to the presence of Kenyan troops in Somalia.

Nevertheless, this should not mean that the U.S. can conduct operations that do not fit into the norms of international law. This behavior is based on the theory of American "exceptionalism," which President Barack Obama set out in his address to the nation on September 10 2013. The US-led policy distinguishes America from other countries, which makes America exceptional, he said. 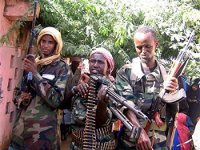 "The definition of "American exceptionalism" per se is a false notion, and its precise definition could be "breaking the law," Tarek Heggy, an Egyptian writer and political analyst, honorary professor at Gatestone, New York, USA, said in an interview with RIA Novosti. "The Americans violate the law, their actions are contrary to international law, they ignore the UN, which they founded in 1945," said Heggy.

The status of exceptionalism was made especially bright during President George W. Bush's stay in the office, who invaded Iraq, although the UN Security Council had not approved his plan by, said Heggy. The Americans invaded Iraq because of suspicions about the existence of weapons of mass destruction there, but found nothing, and no one was held accountable for it. Bush's follower, Obama decided not to waste his time on coordination. His thesis can be expressed as follows: " If international law suit us, we fulfill them - if not, we are acting in our own way." Based on this, the use of drones during Obama's presidency has had a six-fold increase.

Nobody is responsible for the bombing of Somalia, Yemen, Pakistan, Afghanistan. What is the motivation for such actions? This is a struggle against terrorism of Al-Qaeda  which was created by the CIA and Saudi intelligence during the Cold War.

"They were looking for a partnership with those who wanted to fight against the Soviet Union and acted on the principle of "if you're an enemy of the USSR, you are, by definition, a friend of America." Al-Qaeda was created by two intelligence agencies to fight Soviet soldiers in Afghanistan," said the Egyptian expert.

The use of drones is based on the U.S. presidential directive, which says that one can kill outside the United States, including American citizens, who are not members of Al-Qaeda." This can be done without a declaration of war; it does not matter either, whether those citizens and countries are involved in a war of hostile operations against the United States. The directive does not specify the criteria to make the lists of those subject to liquidation and what legal base is used for these criteria. Well, after the mayhem with global surveillance of the NSA, which Edward Snowden exposed, such a question is not surprising.

Yet, how the United States would react to other countries, such as Russia and China, using a similar strategy? Only Israel uses similar tactics, but the international community keeps silence as well.

The killings of civilians in Pakistan became a reason to submit to sue the CIA and the Pentagon in 2012. The lawsuits were filed by influential human rights organizations - the American Civil Liberties Union and the Center for Constitutional Rights. The suits were dismissed: the court recognized that the invasion of drones in the airspace of sovereign states without the consent of their governments was a consequence of the war on terror, which does not recognize state borders. The states subject to bombings either harbor terrorists, or lose the right to be sovereign, as an integral element of sovereignty is an ability to prevent attacks on other countries.

However, such disregard for international law nullifies cooperation with other countries at this point. On November 26, 2011, when 24 Pakistani soldiers were killed in an air strike on a checkpoint near the border with Afghanistan, the U.S. was forced to temporarily suspend the use of drones. As a result, the cooperation between Islamabad and Washington in the fight against international terrorism, which began after the attacks of September 11, 2001, was virtually shelved.

The use of torture as evidence to prove association with Al-Qaeda, keeping people without trial in Guantanamo, the drone program for "pinpoint killings," entailing numerous civilian casualties, say that the United States is not a civilized nation, nor does it have the right to play the role of an international referee in the observance of international law and human rights by other countries.