Terrorists in Syria play soccer with heads of civilians

And where is the accountability and responsibility regarding their western terrorist-masters? Terrorists playing soccer not with balls but rather with the heads of Syrian civilians, decapitated. The images are shown in a video released Saturday (28) on social networks, showing the same armed men fighting for more than two and a half years to end overthrow the government in Damascus. 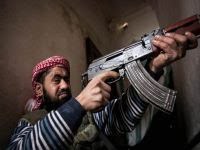 This video shows the atrocities committed by terrorists, in particular, the Islamic State of Iraq and the Levant (EIIL) and Al-Nusra Front against Syrian Shia Muslims. Since the beginning of the Syrian conflict, some countries in the region, such as Saudi Arabia, Qatar and other Western nations, including the United States and its allies, have provided both financial and logistical support to armed groups to overthrow the government of Bashar al-Assad.

Last week , the Russian Foreign Minister Sergey Lavrov said that Western countries now admit that the permanence of Bashar al-Assad in power in Syria is much more convenient than the terrorists that are in the country to fight to seize power.

Previously, Michael Hayden, former head of the Central Intelligence Agency (CIA) and National Security Agency (NSA) in the United States, said the best option to end the crisis in Syria, would be the victory of the Syrian government, and no longer believes in a victory for the terrorists.
These comments show a change in the policy stance of the West over the Syrian crisis, because these countries have lobbied to overthrow Al-Assad from power.

The British consultancy IHS Jane's defense revealed last September that around 100, 000 terrorists backed by Western countries and the region, organized into over a thousand terrorist groups, today have operations in Syria where they are fighting against the government and the nation.

Since mid-March 2011, Syria has been the scene of riots and atrocities carried out by terrorist groups, funded and directed from some Western nations and several countries in the region, with the aim of overthrowing the government.

According to the United Nations (UN), more than 115.000 people have died and a total of 7.8 million people were displaced by the violence in Syria.