On the ninth anniversary of the death of Palestinian leader Yasser Arafat, scientists analyzed tissue taken from his body, exhumed a year ago, and confirm that there was poisoning with polonium 210, the deadly radioactive element.

Scientists at the Centre for Forensic Medicine, University of Lausanne, Switzerland, have discovered the remains of Palestinian leader Yasser Arafat (1929-2004) contained a level 18-36 times higher than normal of the radioactive element polonium. The announcement was made yesterday by journalists David Poort and Ken Silverstein, of network Al - Jazeera, which obtained an exclusive report of 108 pages prepared by the experts of the university (1). 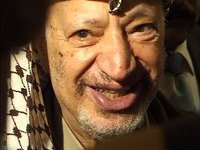 With characteristic caution, the scientists who carried out the tests ensure that they are no more than 83 % sure that Arafat was poisoned. But Dave Barclay, renowned forensic scientist and retired detective from the UK, heard by Al - Jazeera, has no doubts it was poisoning: he said he was convinced it was murder. "Arafat died as a result of poisoning by polonium. We have found the weapon that killed him," said Barclay. "The level of the substance in the ribs of the Palestinian leader is 18-36 times the normal average, depending on the literature," he added.

On November 27, 2012, Swiss, French and Russians scientists withdrew body tissues from Arafat, exhumed at the request of the widow Sura Arafat from the mausoleum where he was buried in Ramallah, in the West Bank. Also it was she who sent the journalist Clayton Swisher , Al Jazeera , the suitcase with the clothes that Arafat carried when he was taken, already very ill, from Palestine to the Percy Military Hospital in France.

Swisher delivered this material, as well as x-rays and medical reports to the Center of Legal Medicine of the University of Lausanne on February 3, 2012. Some months later the test results confirmed a level that was "inexplicable and intolerable of polonium 210" - powerful and deadly radioactive element - in "the personal belongings of Mr. . Arafat", as at the time François Bochud, director of the Center, explained.

Yasser Arafat began to feel ill on the night of October 12, 2004, after dinner. He had been held since 2002 in the Muqata, the group of buildings housing the presidency of the PNA (Palestine National Authority). Surrounded by the Israeli army, under daily bombardment, the buildings were nearly destroyed and the Muqata had its water and electricity cut off. Arafat was only able to get out because his health worsened, causing him to go to France for treatment. He died on French soil, aged 75, on 11 November 2004, without the doctors who attended him - Tunisians and Egyptians in Ramallah, and French doctors in Percy, being able to agree on a diagnosis of the cause of death .

In Palestine, however, they always spoke of poisoning. And the Palestinians have accused Israel as being responsible for the murder. Pointing to a 2001 interview, given to the Israeli newspaper Maariv by the then Prime Minister Ariel Sharon, he says verbatim that he "regrets" not having "settled" Arafat when Israel invaded Lebanon in 1982 - the year that Sharon was Defence Minister and Arafat lived in Beirut, the Lebanese capital. In 2003, Ehud Olmert, the second coalition government headed by Sharon, told Israeli army radio that the assassination of Arafat was "definitely an option," according to what was reported by Eric Silver, The Independent (2).

Moreover, Israel has a long history of assassinations and attempted assassinations against Palestinians, both authorities and citizens (remember the attacks on Gaza and its thousands of victims), and has proven existence of and use of polonium 210. Richard Silverstein, Tikun Olan site, remembers an event that occurred in 1957 in the laboratory of the Weizmann Institute, operated by the Atomic Energy Committee of Israel. The accidental release of polonium 210 killed several Israeli scientists (3).

On January 9, 2013, Shimon Peres, the current president of Israel, let slip in an interview with The New York Times, that Arafat was actually murdered. I gave the news of the newspaper Brazil de Fato, and it was republished by the site of a famous journalist. Pressed by Brazilian Zionists - which claimed that the information was untrue - he just removed the post. But the Zionists were wrong, as evidenced by the excerpt from the interview in which Peres speaks of the assassination of the Palestinian leader: Ronen Bergman, Interviewer: You did not think Arafat would be assassinated.

Peres: No. I thought it was possible to negotiate with him. Without it, it was much more complicated. Who else would have closed the Oslo Accords with? Who else could we complete the Hebron agreement with? [...] (4)

As it turns out, Peres was trapped by what was contained in the reporter's question. The New York Times reported that he just did not put the blame of the murder on agents of Israel, but the site editor of HispanTV, Abu Talebi, in electronic correspondence sent to me on January 22 this year, confirmed that Sharon had given this information in an interview on Israeli radio, heard by reporters from the Arabic newspaper Al-Quds Al-Arabi, published in London.

It is not surprising. The Zionists, although they invariably control all governments of Israel, from 1948 until today, comprise different currents of opinion. Getting some consensus is always a difficult experience, as evidenced by the delay in the composition of the current cabinet of Prime Minister Benjamin Netanyhau. These differences , existing just after the formation of the Jewish Zionist movement in the 19th century , are the basis of the different views held by Israeli politicians. This explains why Peres was against the murder of Arafat, while Sharon and Olmert considered this possibility.

No matter what happened, history shows that sooner or later the most complicated mysteries are eventually resolved.

Baby Siqueira Abrão* is a journalist, she was Middle East correspondente for Brasil de Fato and Carta Maior