According to the Inter-American Development Bank (IDB), Bolivia is one of the countries where retirees are better protected in pension coverage. This is because 97 % of the senior citizens of the country have access to retirement pensions. This number exceeds that of countries such as Argentina , Brazil and Chile. 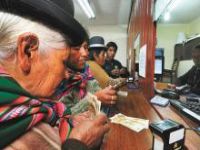 In 2007, the Bolivian president, Evo Morales, implemented the program Income Dignity in order to avoid extreme poverty at one of the most vulnerable moments of life: old age. According to the study  "Best pension, best work. In search of universal coverage in Latin America," published this month by the IDB, this is one of the factors contributing to that Bolivia being a regional example in this regard.

In this country, less than 20 % of the population contributes to the pension system, however, more than 90 % of the elderly are covered thanks to the existence of a universal retirement program. With Dignity Income, the right to social security coverage is guaranteed for all citizens over 60 years of age, regardless of the contributions they have made​.

According to the document, this type of program also helps in increasing formal employment and productivity. According to Mariano Bosch, one of the study's authors , "this program offers such security in terms of pay-in that we note that there is a decrease in labor supply among the population which previously had to continue working up to 80 years of age to survive," he declared to the BBC .

An article published by the Bolivian newspaper La Razon in early October, confirmed that almost one million people receive payment through the Income Dignity programme. The benefit is financed with part of the funds received from the Direct Tax on Hydro-carbides (HDI), part of the Indigenous Fund and the General Treasury of the Nation (TNG), besides dividends from nationalized companies (Entel, YPFB, ENDE, among others).

Despite the breadth of the Bolivian allowance for the elderly, the amount received each month is $29 for those over 60, which extends  36 to those who have another type of insurance cover. In Argentina and Chile, for example, the retirement sum is between 4 and 8 dollars a day.

The IDB estimates that only 62.5% of the Hispanic population has access to retirement. This is a worrisome number if we consider that in 2010 the percentage of adults over 65 years of age in Latin America and the Caribbean was 6.8% and, according to estimates, by 2050, this age group should reach 19.8 % of the total population in the region.