Forty-six percent of Russians believe that the Cold War between Russia and the United States is possible to resume. These are the results of an opinion poll conducted by the All-Russian Public Opinion Research Center (VTsIOM). 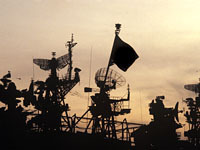 Nine percent said that they believe such a scenario is "very likely" or "quite likely" to develop (37 percent). Forty-four percent of the participants of the survey allow such a possibility, but consider it improbable. Only four percent said that it is absolutely impossible. Six percent of the respondents found it difficult to answer the question.

Social scientists analyzed the opinions on the subject in blogs and social networks.

Three percent of Internet surfers do not believe in the possibility of  another cold war between the superpowers. Another 16 percent say that the "cold war" ended long ago.

"In the age of the Internet and global communications, there is an opportunity  to show influence on these processes. This opportunity belongs not only to politicians and those in power, but also to ordinary citizens," president of the American University in Moscow, Eduard Lozansky, whom Pravda.Ru asked to comment on the relevancy of the term "cold war" in our time. In his opinion, the likelihood of such a development is quite low, and "everything depends on the will of the people."

"The will of the people, as we see now, even on the latest events in Syria, means a lot. Most Americans supported the position of the Russian leadership on Syria. This is, perhaps, the first time, when it happens," he said.

"I would, on my part, urge the Russian and American people not just to rely on politicians, but participate in some joint projects more actively. Both countries have an enormous area for collaboration that can be mutually beneficial. Anyone can show their initiative, offer a project or an idea. The more we have of this activity, the less chances the "cold" or any other war will have," said Eduard Lozansky.

The term of the "Cold War" simply has no right to exist nowadays, the director of Franklin D. Roosevelt Foundation for United States Studies at the Moscow State University, Yuri Rogulev believes.

"It applies to a particular period, when there was a global confrontation indeed. It was not easy, it was a struggle between two opposing systems. In this sense, of course, there is now no reason for the "cold war" to resume," the expert told Pravda.Ru.

He believes that there is no sense in talking about any opposition between Russia and the United States. "There is a disagreement on a number of issues. But we can not consider it a confrontation. The U.S. is not an enemy to Russia and Russia, in all of its foreign policy doctrines, does not define the United States as an enemy. We can talk about rivalry, the absence of interaction, or different positions," Yuri Rogulev said.

"Of course, the "cold war" still affects politicians today. In home politics, it is very easy to earn some points by finding an enemy, and criticizing him. This is what US politicians like to do. There are Russophobes, with anti-Russian sentiments, which, if you look a little deeper, are based on nothing. In Russia, it is also quite easy for politicians to explain domestic problems with problems of external influence. This is very easy to do, one does not need to prove anything," said the analyst.