German Chancellor Angela Merkel said in an interview with Jewish Voice from Germany that "support for Israel's security is part of our national ethos," that "Israel is still the only true democracy in the Middle East," and vowed to protect the country from the Iranian threat. What happened to the political instincts of Mrs. Chancellor? 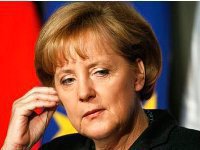 In an interview on September 13 with Jewish Voice from Germany Angela Merkel said that heinous crimes committed by Germany against the Jews that nearly led to the collapse of civilization would always be present in the relations between the countries. "We can shape the future of the resulting special relations between Germany and Israel in awareness of that. Our relations are very good," Merkel said. Each line of the interview shows guilt before the Jewish people, but Ms. Merkel is not personally to blame for the Holocaust, so why is she making her people hostage to Israel's security, and is even including it in the ideology of "ethos" of the Germans?

"Israel is the only true democracy in the Middle East," continued the chancellor. "We want to work together as closely as possible in all spheres and can be proud of our cooperation in culture, science or environmental protection. In development policy, we're carrying out very successful trilateral projects together, for example in Ethiopia. Another priority is youth exchange."

Ethiopia is, of course, a strong argument. Israeli democracy is a democracy, but not a true one, the term "only" is also debatable, but what about Iran that provides for change of power (which, incidentally, is not the case in Germany)? Israeli legislation has approximately 40 laws that apply only to the Palestinians, is this not what we call "segregation"? In addition, thousands of Palestinians are in prison without charge, under what laws?

When asked about the Iranian nuclear threat against Israel, Merkel repeated: "That means that we'll never be neutral and that Israel can be sure of our support when it comes to ensuring its security."

Answering the question about Zionism, she said: "For those who share my view that the Jews as a people have a right to self-determination, Zionism as a national movement of the Jewish people is the embodiment of this very right which its opponents want to deny."

Ms. Merkel has likely forgotten that every nation in the world that identifies itself as a nation is entitled to self-determination, at least in accordance with the UN Charter, regardless of anyone's wishes. However, Israel denies this right to the Palestinians. In addition, Israel's right to self-determination is beyond doubt after the adoption of UN Security Council resolution number 181 in 1947.

Of course, the reporter tried to get further Chancellor's "approval," and the conversation turned to the Israeli settlements in the Palestinian territories. Here Merkel had a difficult time. "I've often made critical comments about settlement expansion in the occupied West Bank and in East Jerusalem, and my position hasn't changed. At the same time, it's equally important to me that the two sides, both Israel and the Palestinians, work towards a durable peace settlement, that's to say a viable two-state solution. And I will support every step taken by the Israeli Government to make such talks possible," said the Chancellor.

Ms. Merkel is inconsistent. She just expressed her solidarity with Israel, called it a true democracy, and suddenly opposed its policies of the occupation of the West Bank. Does this mean she supports Palestine?

In conclusion, the conversation turned to Turkey. Merkel was asked to comment on the statement of Prime Minister Recep Tayyip Erdogan that "Zionism is a crime against humanity." "I've spoken several times with Prime Minister Erdogan about the relations between Turkey and Israel. I'm pleased that following President Obama's visit to Israel, talks between Israel and Turkey are again taking place and hope that the relations between them will further improve in the interest of both countries," said Merkel. Once again, there is no answer to the question for understandable reasons, what would the German Turks say in response to criticism of Erdogan?

The journalist asked whether, given the hostile attitude towards Israel, Germany would block Turkey's admission to the EU. This is a legitimate question, because if the country has not settled the relations with its neighbors, it cannot join the EU. But the Chancellor again evaded, turning to the Cyprus issue. "We've stated very clearly that no negotiating chapters between the European Union and Turkey will be concluded before the Ankara Protocol is complied with, that's to say before Turkey grants all E.U. member states, including Cyprus, access to its ports. That hasn't happened as of yet and it's therefore a major obstacle for the continuation of accession negotiations between the E.U. and Turkey."

The major obstacle? Turkey that aspires to join the European Union was able to complete the discussion of only one chapter of the 35 negotiating chapters required for new EU members. Negotiations of at least 12 chapters are ongoing, and 18 were frozen by Cyprus and France. Among the major obstacles is the lack of recognition of the Armenian Genocide of 1915-1916, the actual issue of Cyprus status, the northern part of which is occupied by a pro-Turkish unrecognized state. Add human rights into the mix and women's rights that the West considers important in relation to, for example, Iran. There is not a word about it with regard to Turkey, and the Turkish minority in Germany may think God knows what.

What about the responsibility for the security of Israel? It does not exist. Otherwise, Germany would not have voted at the UN General Assembly for recognition of the Palestinian Authority as an observer state. It would not have blackmailed Israel by submarine "Dolphin" purchased at half price. In particular, Berlin promised to provide Tel Aviv the last, sixth submarine only if Israel changes its settlement policy, signs a moratorium on construction of the settlements, and begins construction of a treatment plant in the Gaza Strip as well as repays the frozen money to the Palestinian Authority.

Why is Merkel talking about things that do not exist? Former Israeli ambassador to Germany Shimon Stein believes that she does it out of guilt for the Holocaust. In Germany, there is an unwritten rule: since the German people supported Hitler, it is its eternal shame and everlasting atonement. But having repented before the Israelites, they may have to repent before their own people, for example, for the involvement of Germany in the war in the Middle East.