Obama to step on Hitler's path?

Is a strike at Syria inevitable? On September 4, a draft resolution of the U.S. Congress became public, in which the need for military action is not denied, but its term is limited to 60 days. At the will of the United States the world is on the brink of another World War under the classical, known since the time of Hitler's scheme - a false pretext and a large-scale aggression. 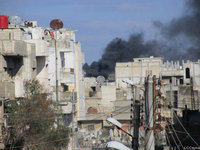 Responsibility for the use of poisonous gas sarin not far from the Syrian capital was placed on the regime of Bashar al-Assad by the U.S. It is the president of Syria, according to the U.S. authorities, who is responsible for the deaths of 1,429 Syrians. Assad, of course, will have to pay for it, U.S. officials stated. As in the case of aggression against Iraq, Washington does not burden itself with looking for evidence. Senators and congressmen were provided with some murky opinions and indirect information obtained by the U.S. intelligence. British and German secret services joined the U.S. with similar vague reasons in order to support the big brother of the U.S. intelligence community. Of course, no other convincing and direct counter-arguments were taken into account.

President Obama plans to obtain congressional approval for military action. He said that while he had the authority to launch a military operation without the approval of Congress, the country would be stronger and its actions would be more effective if the military actions were supported by Congress. He added that the country needed this debate. Obama is so keen to prosecute al-Assad that he is ready to act without the approval of the UN Security Council, which, according to the U.S. president, does not want Assad to pay. Once again the system of international law is replaced if not with  the sole will of the American President, but the decision of the National Congress. A world dictator with the manners of Hitler is born in front of our eyes.

In the eastern Mediterranean, off the coast of Syria, there are five American destroyers with guided missiles. Each can carry 90 missiles, but according to experts, about half of them are defensive. The destroyers at any moment can release over 200 cruise missiles "Tomahawk" at Syrian targets.

Obama said that it would not be a perpetual intervention, and there will be no ground operations. It will be limited in duration and scope. Military analysts disagree over the tactics that the United States may choose.

Under what scenario could this operation develop? Which option would the U.S. choose - Iraq, Libya, the Balkans, or will this operation have no equivalent in the modern American history?

Sergei Demidenko, an expert of the Institute of Strategic Studies and Analysis, said that the probable operation against Syria can be compared with the Iraq war of 2003-2011. "Most likely, it will be a fleeting bombing during one, two or three days. This tactic has been repeatedly tested on Iraq - fly near, bomb, then fly away and say that the bloody dictatorship was served a proper lesson," Demidenko said.

He indirectly confirmed the words of Obama about ground combat. "There will be no ground operation, they will not get back there. Syria is even worse than Iraq in terms of the ability to establish control over the territory," Sergei Demidenko continued. He added that a ground operation in Syria would bring the Americans colossal losses. Most likely, the potential strike will be similar to the operation of 1986 "El Dorado Canyon" or the operation of 1998 "Desert Fox," Demidenko believes.

Evgeny Lobachev, a retired FSB Major General agrees that a possible strike against Syria is likely to be an air strike. However, he believes that the operation will more likely resemble the intervention in the Balkans in the late 1990s. "There will be a few days of bombing, and then many years of excuses," said Lobachev. He believes that the United States has long lost all sense of shame and is guided only by its own interest.

He believes that in this case the United States has a need to control the situation in the Middle East as this region is rich in oil. "They absolutely do not care whether there are chemical weapons or not, and who used them. They have absolutely no interest in it," Lobachev said.

Deputy Director of the Institute of USA and Canada Studies Victor Kremeniuk also believes in the development of the Balkan scenario. "Yugoslavia is a tried out, successful scenario. Destroy everything that can be destroyed, destroy the infrastructure, all the airfields, all the hiding places. Then take them with bare hands,"Kremeniuk said. He also argued that under the law of war powers of the President adopted in 1973, Obama may at any time begin sending troops and start a combat operation abroad, and report to the Congress only three months later.

Obama needed to address Congress in order to place on them the responsibility for the final decision on an attack on Syria, the president of the Institute for Israel and the Middle East Eugene Satanovskiy is convinced. "If Congress decides to fight, Obama will blame all consequences on Congress. If Congress decides not to fight, he, again, will blame Congress of all the consequences. Obama's main problem in the United States is that any U.S. president has to reckon with Congress," Satanovskiy said.

If the Syrian front emerges, the U.S. will choose the tactic of launching pinpoint missile and bomb strikes on the centers of administration and defense of Assad, said Evgeny Satanovskiy. The expert does not rule out the possibility of bombing of some al-Qaeda units by the American troops.

Evgeny Satanovskiy believes that the last word in the announcement of the beginning of the Syrian operation does not belong to the president of the United States. "It is not about Obama. There are plenty of major sponsors and partners behind him, who are pushing him, trying to incite America into a war," Satanovskiy said. "Obama received his Nobel Peace Prize and the fact that he's hesitating, trying to understand whether he is a strong American aggressor or an American dove of peace does not make a great impression on those who voted for him in the elections," the expert added.

If Obama's pendulum swings in the direction of aggression and a war on Syria is declared, Russia will face a wave of terrorist attacks, the Syrian Ambassador to the Russian Federation Riad Haddad is convinced. On Tuesday he stated this at the hearing on the situation around Syria in the Public Chamber of the Russian Federation. According to Haddad, there are tens of thousands of terrorists in Syria, and if they "successfully destroy" the country, Russia will face not so bright future. "Attacks and violations of the normal course of life is what awaits Russia in the future if the American aggression leads to a significant change in Syria's open war against global terrorism," said the Ambassador.