The price of dignity (part two): The destruction of Libya

It was Italy who invented the air raid in 1911. That year the Royal Italian Air Force dropped on the Libyan capital Tripoli a few bombs, just before attached to airplanes made ​​of wood and cloth. The Turkish army that garrisoned the city was annihilated by this display of military superiority and Libya in short changed hands, passing from the Ottomans to the Savoy. The Italians pursued the memory of ancient imperial splendor, not realizing that those days would never return, and that other nations had begun to build new empires. 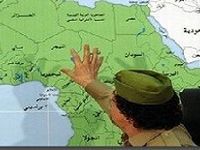 What better than another bombing campaign to celebrate the centenary of that invention? It was 2011 and Italy returned, not alone, not as a protagonist, but returned.

Libya was attacked by the West well before the February 17, 2011, the date to which the first riots in Benghazi go back. Such an operation must be planned well in advance and with great care. You need to choose carefully the people to bribe, blackmail or murder. You have to have large amounts of money, weapons and puppets to use publicly while others pull their ranks. Above all, you must find out who is suitable to govern after.

Someone who does not propose later unwelcome surprises like that young colonel who in 1969 overthrew the old Idris, king puppet and coward, and that instead of ensuring the Western domination over the huge oil wealth of Libya, thought to be a friend of the Soviets. Someone who does not put counters on oil wells to always know how much is extracted and taken from the Country all the money raised from the sale of that black gold. Someone that does not drive out American and British from their bases in Libya. Someone that does not wake up one morning thinking of giving Africa a single currency based on gold and that does not endanger the global dominance of the U.S. dollar.

After the fall of the Berlin Wall, Libya too opened gradually to the West allowing foreign investment in a more consistent and diverse way than before. It could be an opportunity for a different future of peace and tranquility but the West had other ideas and establishing normal diplomatic relations to do business was not exactly the real purpose. Here the West are the United States, England and France, main components of the coalition that bombed Libya for many months. There was Italy too, bombing like the others, but it does not count, if not as a servant and as a dishwasher.

The riots began in Libya after analogs in Egypt and Tunisia, forcing a sudden change of local governments.

The Tunisian President Ben Ali and Mubarak of Egypt will be very surprised at the way in which they were shown the door by their American master but the main objective was Libya and Syria, not Tunisia and Egypt: regime change in the latter two States were to serve as a justification for those in Libya and Syria. They were, that is, the forerunners.

Again, as in the past, the facts followed the protocols of regime-change prepared by Gene Sharp and his associates: street demonstrations, provocation, days of rage, events on social networks, fierce stigma of government responses.

The news that Western newspapers and television reported about the atrocities attributed to Gaddafi in suppressing the revolt were for the benefit of Western audiences. The Libyans soon discovered the truth: Gaddafi didn't bomb Benghazi with the air force in retaliation for the riots, causing twenty thousand deaths in one day. The satellite photos provided to the UN by Russians proved it, showing the absence of craters, but in vain. Nor is it true that stimulant and aphrodisiac drugs were administered to the loyalist troops and that under the effect of those drugs mass rapes and other atrocities against the uprising people were then carried out.

The Libyan government was initially taken aback by the riots, insurrections and by a number of defections in the armed forces, especially in Cyrenaica. It was also forced to withdraw from some of its positions, but it never lost completely the control on the territory. Although some people detested Gaddafi, the majority of the Libyan people loved him and Libyans were still willing to support him. There is, indeed, a profound difference between hating a government to the point of an armed revolt against it, and belief that the time has come to turn the page, passing the baton to a new leadership.

A few insurgents do not make a revolution. Especially if they were hens scratching between jailbirds, disgruntled various types and foreigners. The militias who fought against the army were composed by Libyans but also and especially by foreigners, coming from the most disparate parts: Saudis, Qataris, Chechens, Jordanians and anyone else who was willing to fight for money or for love of war, holy or secular as it was.

This jumble of people and international pressure should have to be enough, according to plan, to force Gaddafi to escape and destroy his power system. Aerial bombardment? Maybe, but limited. Milosevic gave it up after two months and Libya is basically a desert.

The situation began, however, to change rapidly in favor of the government forces and among the Westerners began to spread the fear that their plan could fail, with all the consequences. It was proposed the creation of a no-fly zone that would have forced Gaddafi's air force to remain on the ground. For humanitarian purposes, of course. The resolution of the conflict would thus achieved only with clashes between opposing infantry forces.

Russia also agreed, in an excess of kindness and trust towards the Americans. And the March 19, 2011 resolution number 1973 was approved by the UN. A huge mistake for Russian diplomacy: NATO planes were not limited to fly in Libyan skies, forcing down those government aircraft, but took an active part in the fighting, taking the side of the rebels and taking them to victory.

Fatally, a storm of bombs and missiles broke against the Libyan army guilty of defending a legitimate government, to whom it had sworn allegiance. But, above all, guilty of representing, with guns, the vast majority of the population still identifying in Gaddafi and his act.

Again, contrary to expectations, Gaddafi resisted and did not escape abroad. After a heroic and valiant defense of Tripoli, he moved to his hometown of Sirte. Here, he resisted many more months but eventually found his death by traitor hands, October 20, 2011.

The bombing stopped soon after, reflecting the fact that, contrary to what was stated publicly, that it was just sought the death of the leader of the Jamahiriyya and nothing else. Hillary Clinton, in those days Secretary of State, landed at a newly won Tripoli and uttered her most odious phrase: "I came, I saw, he died." But Mrs. Clinton was not Julius Caesar and the remark said in front of cameras, on one occasion, might instead let us understand the degree of mental illness of the U.S. rulers and the type of delirium they live daily.

At a distance of two years, now Libya is destroyed, divided and corrupted. It is not the Country it was before the war. The rebellious militias have never been loose and fought against each other and against a partisan movement for liberation on which the Western media have drawn a veil of silence. The traitors, of which intentionally we do not report here the names because they offend those of loyalists, have proved themselves incapable of governing, as was widely expected. Who trusts in fact a traitor who does not represent anyone but himself? Who trusts a puppet when you see the ropes that hold him and who pulls them?

Gaddafi had no chance of escape. This Bedouin, who has held a family of quarrelsome people for forty years, loved his country, all of it. King Idris' Libya was underdeveloped, inhabited by starving people, mostly illiterate and under colonial rule. Gaddafi was able to instill a dream and make it real, despite its political mistakes.

He managed to give dignity to a family of people who unfortunately knew askance. But what Nation in the world does not live at times this situation? If the goal had been democracy and not oil and gold deposits in Libya, there would not be riots artfully prepared or there would not be a bombing campaign lasting eight months.

Gaddafi lived in remembrance and veneration of a great Libyan man, Omar al-Mukthar, which had opposed the fascist rule. As Omar al-Mukthar, even Gaddafi was killed by a traitor's hand. Ironically, even he who betrayed him was then eliminated, by his own principals.

So Gaddafi inevitably had to die in Libya, his native country: it was a matter of dignity. Escape would have meant denying his past and what he tried to accomplish. It would have meant betraying his people, his Libya.

In Sirte, massacred by NATO bombing, died also one of the Colonel's sons, the brave Muʿtasim, who was killed after being captured. There is a proverb that says as dogs can  kill a lion, but the dogs remain dogs and the lion remains lion.

Here, Mu'tasim died as a lion. The video of his death was made by his own murderers, which were not even all Libyans.

We who read the Hagakuré and we who wonder what constitutes the Way of the Samurai, we can glimpse a response watching this video and listening to the last words of Mu'tasim. When asked, mocking him dully, whether those were wounds on his chest, Mu'tasim says, "... They're medals ..." thus arousing the rage of those present.

Poor rebels, so foolish and so naive!

At a closer look, then, once again, the price of dignity is death.