Georgia's Saakashvili wants to be alive and free

President Mikhail Saakashvili who is leaving office at the end of his term said that his counterpart Vladimir Putin wanted to see him dead or in prison, and urged the U.S. to help curb the growing influence of Russia in Georgia. Saakashvili is hopeful that the people of Georgia will "put everything in its place," but the people have long made ​​the choice and not in favor of the president. 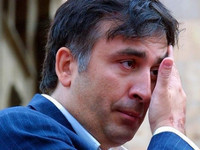 Saakashvili also said in an interview with Bloomberg that the Prime Minister Bidzina Ivanishvili wants to arrest him on made-up charges of corruption at the request of Putin. "Russia's conditions are clear: I must either be killed or imprisoned. This is what Putin wants," said Saakashvili.

Saakashvili believes that Ivanishvili is an accomplice to the Russian President, and stressed that he and Prime Minister can only be judged by the people of Georgia. "I'm not Ivanishvili's zebra for him to catch and cage me. One thing is what he wants, and another is what is real. Georgian people will put everything in its place. As for me, I will be judged by the history, but not some zoo director," Saakashvili told Bloomberg. Earlier, Saakashvili claimed to be a personal enemy of the Russian leadership because "as long as I am alive and free, Putin will never regain his position in the post-Soviet space." He believes that improvements in the relations with Russia can only be achieved if the people of Georgia are ready to give up an important part of their territory, abandon development and hopes for the future.

The closer the time of resignation (election will be held in Georgia in October), and withdrawal of immunity, the more Saakashvili is worried about his fate. Let's leave paranoia aside and try to figure out whether the president has a reasonable concern about arraignment.

So far, no single case was opened against the incumbent president. This was announced on August 3 by Chief Prosecutor Archil Kbilashvili. "We do not plan anything like this in the near future. I'm talking about the facts and I cannot make predictions since I'm not a politician but what will happen remains to be seen," Interfax quoted the words of the prosecutor of Georgia. Moreover, according to the newspaper Georgia and World, at the direction of the Speaker of the Parliament, the leader of the Republicans David Usupashvili, the preparation of the draft law on presidential immunity after the end of the term was started, and it is expected that the Parliament will adopt this law even before the inauguration of the new President of Georgia.

The paper suggested that the guarantees of immunity for Saakashvili were demanded by the Americans because the President is an "inconvenient witness" and out of fear to be put behind the bars he may blurt out dangerous secrets. "He already revealed one secret, saying that the FBI watched the dispersal of the rally on May 26, 2011 by the Cabinet of the former Prime Minister Vano Merabishvili, and even made ​​the conclusion acknowledging the actions of the police as legitimate. Saakashvili still has a lot to say, something to share, at least in connection with the August war," the newspaper wrote.

From time to time the Georgian press discusses possible cases where Saakashvili may be brought to justice. They include the assassination of the former Prime Minister Zurab Zhvania, takeover of Georgian Imedi TV by members of the "United National Movement" ( UNM ), corruption, creation of repressive penal system, and finally, unleashing the war in August of 2008 as a result of which Georgia lost its territory. The Prime Minister clearly called for an investigation of this particular case. Ivanishvili said that he personally had plenty of questions about that period, and that the theme of war in general was covered by fog.

"In the West, there is a clear understanding of what happened, supported by a report of the EU Commission Tagliavini (with the conclusion that Georgia started the war), and here the truth has not been told," said the prime minister. MP from "Georgian Dream" Zachary Kutsnashvili told Gazeta.Ru that "the objective of this investigation was not to determine who started the war, Russia or Georgia, but to establish whether war crimes have been committed during the war. The Rome Statute entitles us to conduct an independent investigation."

Now let's talk about corruption. "The fact that there is no petty corruption in the country does not mean that the country is free from the corrupt elite because authoritarian regimes are the ones that create different political and economic monopolies," said MP from the party "Unity for Justice" Peter Mamradze. President of Georgia was accused of involvement in the fuel business that he allegedly protected. "Through this business he robbed the population, he and his family. We have evidence of how the fuel prices were actually raised in the manual mode, and we will give them the prosecutor's office," said the leader of "Kartuli Dasi" Jondi Bagaturia.

Finally, according to the chief prosecutor Kbilashvili, not less than 20,000 complaints were filed by citizens of Georgia against former government members in the first three months after Ivanishvili came to power. "There was a lot there, including torture, weaning of property, unjust sentences," the prosecutor told Kommersant newspaper.

More than 1 million 200 thousand signatures of Georgians were collected for his departure from office earlier this year. This was reported by representatives of the public organization "The unanimity of the rights of the public." For the four million-strong Georgia this is a significant number. "He is a political corpse, in fact he is already "killed" by the Georgian people, in a month he will not be the president. And he has no chance at a political future, no one in Georgia sees it," said in an interview with Pravda.Ru Chairman of the Party "Free Georgia."

At this time, there are three known presidential candidates in the October elections: Deputy Prime Minister of Georgia, Minister of Education and Science from coalition "Georgian Dream" Giorgi Margvelashvili, the leader of the Labor Party Shalva Natelashvili, the leader of the Democratic Movement, and the ex-speaker of the Georgian parliament, Nino Burjanadze. The UNM intends to hold primaries to determine their candidate, but will they elect Saakashvili?