German Chancellor Angela Merkel for the first time spoke in detail about espionage related to the exposure of the US NSA in Europe. In an interview with Zeit she stressed that the work of the intelligence services in democratic countries is necessary for the safety of citizens and rejected the comparison with the work of the GDR secret police - the Stasi.

According to Merkel, these are two completely different things, and such comparisons only lead to an underestimation of the harm caused to the people by the GDR state security. In her Zeit interview Chancellor Merkel only mentioned the responsibility for coordinating the activities of the intelligence services. Answering the question of whether she reads intelligence reports sent to her as the head of government, Merkel said that it was the responsibility of the Minister Ronald Pofalla. She said that it has been a long time responsibility of an Intelligence Coordinator, Minister of State, or Head of the Federal Chancellery. 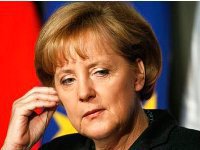 Chairman of the Social Democratic Party of Germany (SPD) Sigmar Gabriel has criticized the Chancellor's statement. The Social Democrat said in an interview with Spiegel-online that, apparently, Ms. Merkel was trying to shift the political responsibility to the head of her department. He added that this was an old game. First, they do not want to know about it, then the problem is diminished, and finally shifted to staff. He concluded that it was clear that the scale of the scandal was great because no one else but the Chancellor should personally take care of protection of the fundamental rights of the Germans.

Gabriel accused Merkel of inactivity due to the NSA spy scandal. He said he found it unheard of that the Chancellor, shrugging her shoulders, was putting up with the fact that the basic rights of millions of Germans were clearly violated by the American and British secret services. However, the spy scandal has not hurt the ruling party much. According to a survey conducted by Forsa, both the SPD and the "Green" Party are still behind compared with the ruling coalition and the Liberals.

Lawyer and blogger Thomas Stadler on German site golem.de rightly noted that the foreign intelligence services were a relic of the 20th century, the era of the cold war when there was a political necessity to spy not only on hostile states, but also on each other. The work of the intelligence services is based on contradictory logic. Worldwide, from a national point of view, they are always considered legitimate, although their ultimate goal is to watch politicians, entrepreneurs, as well as citizens of other countries, thus violating most of these countries' rights.

At the conclusion of his extensive notes Stadler wrote that ultimately, there was a need to talk not only about programs like Prism, but also the state of democracy. A free and democratic state is seen as one handling such scouts as Snowden or Manning who are futilely presented as traitors, persecuted and imprisoned.

There are two sides to every coin. In order to mitigate the bad taste of a top-secret program under the code name Prism that started in 2007, Western media reported that the U.S. NSA has written the code for the operating system Android Google not to eavesdrop, but for the opposite purposes. This information can be found on Bloomberg Businessweek website. Google representatives confirmed that the new versions of Android, for example, for Galaxy S4 Samsung or HTC One, already have such codes, and that they will soon be installed on all new devices.

In light of the information published by German online portal Deutschen Wirtschaftsnachrichten that the NSA monitors up to 75 percent of all mobile devices based on Android, even such positive messages cause skepticism. After all, some jokers say that the English abbreviation NSA stands for Never Say Anything.

Incidentally, in March of 2008, the U.S. National Security Agency presented a new version of its SELinux development (Security-Enhanced Linux) designed to protect servers and workstations running on Linux. There is nothing new in the fact that the government is engaged in spying on its own citizens, but at the same time there is always hope to avoid their nets. The only hard thing is to keep track of everything at once because of the abundance of incoming information. Yet, given a targeted search one can gather plenty of data about a particular person. Few people would be shocked to learn what exactly the infamous NSA is involved in.