French Guyana: A fight that is not disclosed

While the hoarse voice of the streets has led meetings and more meetings of the representatives of the people, who still seem perplexed by the events, the world was still spinning and hushed up by the media market, which is still trying to instill fear in the population while covering the demonstrations. 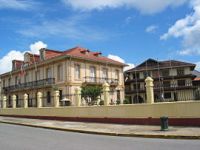 Not coincidentally also the media market seek to instill in people the idea that public financing of the election campaign is unworkable and will set aside funds from health and education to this end. If the state is willing to abide by the hoarse voice of the streets, it may well have the funds to make the campaign without major influences of economic power. And it is no coincidence that in the political world also contrary voices are heard, one of them in the state of Rio de Janeiro, that of the Senator Francisco Dornelles. Meanwhile, in our neighborhood, more precisely in French Guiana, an International Committee of Solidarity for independence from this colonial enclave in South America has been created.

In the movement are those who signed the manifesto of creating expressive figures of the continent, such as Martin Almada, Alternative Nobel Peace Prize 2002, the Argentine journalist Stella Calloni, among others. They explain that "it is necessary to organize ourselves to work for the complete liberation of our great homeland that is first in South America, and more generally Latin America and the Caribbean."

The manifesto also notes that "while much of our Great Nation today is mobilized in the struggle for their second and definitive independence at some point along the way we have to go back 200 years and come back to fight for the first independence, as did Bolívar, Sucre, San Martín, Belgrano, Artigas, and so many more."

The subscribers of the manifesto also point out that "although unbelievably, imperialism maintains among its various faces, that of direct colonialism. And in South America the Falklands remains as a British colony and French Guyana is a French colony".

In recent times, to justify colonial rule, one cannot forget that the British, after invading the islands exactly 180 years ago, expelled the Argentine population and implanted in these lands a population brought from 12,000 kilometers away.

These facts need to be disclosed to prevent the persistence of colonial arrogance, not infrequently with the support of sectors coopted by the largesse of international capital or even by those mentally colonized. In the case of Guyana, under domination for over four centuries, where the European part of the privileged class at the expense of other populations forced to come from Africa and Asia,  there is the spaceport of Kourou, from which  rockets are launched that put into orbit satellites under the projects projects Arianne and Vega.

And not to mention the natural riches of Guiana, such as gold, bauxite, petroleum, fresh water reserves and biodiversity.

In complete and utter silence of the media market, the French colonial power pursues the fighters for the independence of Guyana, the leaders of social movements and especially the militants of the Movement for Decolonization and Social Emancipation (MDES).

As if all this were not enough, the French colonialists favored the departure of the Guyanese to the metropolis to perform second-rate jobs and bring Europeans to work around the base space with high wages, while most of the population lives in precarious conditions.

At this time it denounces human rights violations in various parts of the world, including serving as a pretext for criminal interventions of Western countries - France itself recently in Mali - and so it is necessary to make public what happens in this colonial enclave that borders with Brazil - many Guyanese are victims of imprisonment and torture.

These facts also refer to the notorious "French School", one that, based on the crimes against humanity committed by the security services against the Algerian people in their struggle for national liberation, instructed the Brazilian and Argentine dictatorships to apply repressive methods.

Given these facts, one cannot fail to support the manifesto for independence from French Guiana and also urge the Brazilian authorities to speak out about the events in the neighboring area. And urge any international editor no more silence on the events that are happening in Guyana.

* Correspondent in Brazil for the Uruguayan weekly Brecha. He collaborated with Pasquim, was a reporter for Folha de São Paulo and foreign editor of the Tribuna da Imprensa. He is on the Editorial Board of the weekly Brasil de Fato. He is the author of several books.