How the G8 Joint Statement should read 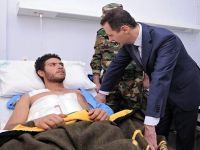 So let us for once spell out the truth and be done with it, let us for once face the facts and not continue to play games of musical chairs; let us once and for all face the music, tell it exactly how it is and not bother to elaborate further on the status quo of humanity until we have evolved into something worthwhile mention. Suppose the G8 statement read like this:

The fact of the matter is that Humankind has allowed itself to fall under the yoke of a corporatist elite which have managed to implant their system on the huge majority of the members of the international community, after spending decades investing trillions of dollars in sabotaging socially progressive models, which without a total internationalization programme, rendered themselves vulnerable.

For decades, an evil clique of nations controlled by the corporate elite whose goal was and is hegemony over the world's resources - its capital - either installed governments or else closed ranks around them, neutering any socially progressive vectors by nipping them in the bud. As it did so, it forged and assumed a false identity as sinister as it is cynical, skillfully manipulating public opinion, claiming the high moral ground.

As it did this, it was actively engaged in subversion, sabotage, terrorism, assassination attempts and acts of murder while blaming the socially progressive world (the Soviet Bloc and the countries it liberated from Imperialism) for the same thing, forcing Governments to become paranoid about their own security and adopt strategies to protect the State. It then accused the model it was fraught on destroying of being a police state.

With the leaders of the socially progressive model convinced that the market economy was the only way forward, this evil clique of corporatists then went on the rampage, shifting the frontiers of NATO eastwards after promising the contrary, starting energy wars outside the auspices of the United Nations Organization (the only valid causus belli against Iraq would have been if it posed an immediate threat to the USA and its allies, as they claimed, the problem being it did not).

The media barrage serving as a smokescreen with active soundbites ringing in the ears of a dumbfounded population brought up on tasty tidbits of corporatist controlled disinformation, fed Big Brother type reality shows daily to massify and exponentially magnify idiocy so that the end result is an ignorant world population unable to discern the truth from fiction, one by one the enemies were targeted.

"Evil dictator" living in a "compound" "holding down his people", "brutalizing them" and ruling through an "evil regime" were the lexica used, synonymous in fact with "enlightened defender of a socially progressive model of government who educated his people, send them abroad to study but dared to challenge the authority of the corporate elitists and to deny them the possibility of milking his nation's resources dry".

This evil clique of nations, loosely denominated NATO, focused on the FUKUS Axis (France-UK-US), former Imperialist powers and including the only one to have practiced an act of nuclear terrorism, twice, continues to push eastwards after a sortie into Africa's most progressive nation and the one with the highest Human Development Index (Libya). Afghanistan was the first piece in the puzzle, Iraq the next, Syria follows and then there is Iran. The last stops on the station are Russia's Siberia region and the People's Republic of China.

The corporatist elitist model cannot tolerate a successful nation which calls itself Communist, now, can it?

For those who doubt the veracity of these lines, does anyone seriously doubt that the FUKUS Axis will attack Syria anyway, using cynical word-crafting in documents as justification, especially now with its special forces massed in Jordan? And why should they stop in Syria?

Syria is the line in the sand. It is a Syrian conflict for the Syrian people, to be solved by the Syrian people, who should choose what they want to do and how. Nobody else, not Qatar, not Saudi Arabia, certainly not the FUKUS Axis. If the unofficial weapons-selling channels are supplying lethal arms to bloodthirsty Islamist fundamentalist terrorists are already operating then it is only logical that the legitimate Government of Syria under international law, that of President Bashar al-Assad, should be supported by forces which counter the corporatist elitists and their FUKUS bully-boys.