The government of Germany continues to pay the price for the crimes committed during the times of Nazism. Before 2017, Germany undertakes to pay compensations worth 1 billion dollars. This amount of money will be paid to the Jewish people for all the tortures and sufferings that they had to experience during the years of the Holocaust, when nearly 6 million Jews were killed. 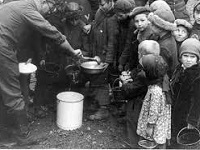 The government of Germany made the decision at the end of May. The money will be paid during the period of four years. In 2014, the amount of payments will make up 185 million, in 2015 - 266 million, in 2016 - 273 million and 280 million - in 2017. All the money will be paid by the Conference on Jewish Material Claims Against Germany. During four years of its existence, the organization has paid compensations totaling 70 billion dollars.

Aside from these payments, the German government undertook to allocate the funds to help the Jews, who had to live in open ghettos. Such camps used to be commonplace in Bulgaria and Romania. Their difference from closed ghettos was about the fact that its inhabitants were not considered isolated from the society, although they did not have any rights either.

The financial assistance that the Conference on Jewish Material Claims Against Germany receives from the German government, is distributed as follows. The money is transferred to Holocaust survivors - there  are about 56,000 such people. The money is used to provide proper care to the Jews, who experienced tribulations during the years of WWII. Quiet and peaceful atmosphere is created for them in an attempt to make them forget the horror that they had to experience during the war. In addition to this, the organization helps 90,000 more Jews. It goes about acquisition of medications, food and transportation costs.

The organization that arranges the payments does not take any certain position. The number of the Jews, who suffered during the war, is a lot larger than mentioned above. Nearly 80,000 Jews, who live on the territory of the former USSR, and who also suffered from atrocities of Nazism, have received nothing from Germany. Does it mean that the Jews from Western Europe are more humiliated than the Jews from Eastern Europe? The question remains open. Obviously, the war in Europe began two years before it came to the Soviet Union. But the losses of Soviet citizens were a lot larger than the losses in all European countries altogether. It just so happens that those, who survived the genocide of Nazism, do not deserve to be compensated.

A meeting was conducted in June 2012, in which German officials and representatives of the Conference of Material Claims Against Germany discussed an opportunity to pay compensations to former inmates of Nazi camps from the former USSR. It was decided to pay nearly 245 million euros. Compensations consist of monthly pensions of 300 euros and one-time payments of 2,500 euros. According to documents, the payments will be made to those who previously could not count of such assistance. Therefore, the Jews from Western Europe, who suffered from the Holocaust, received nearly 70 billion euros with the help of the association. The Jews from the USSR received nothing.

The decision of the German government to pay the compensations was overshadowed with the recent trial over fraudster Semyon Domnitser, because of whom Germany had paid the extra of 57 million dollars. The enterprising man, being a member of the Conference, had been sending out fake applications for receiving compensations for ten years. He amassed quite a fortune; the criminal scheme was bringing him impressive profits. The German government was honestly transferring the money, which would instead be deposited on the man's bank account.

The story had been going on for several years when the legal service of the Conference received anonymous complaints. A large-scale investigation was conducted to unveil the criminal scheme. On May 8, 2013, Domnitser was found guilty of embezzling 57 million USD. However, the money can hardly be returned now.

Is it possible to say that Germany still pays the price for the crimes of its ancestors? Of course, it is. It has been nearly 70 years since the end of the war, three generations have changed, but every new German national carries the burden of responsibility for the crimes committed in the first half of the 20th century. However, it is worth mentioning that it was not only the Jews that suffered from the genocide of Nazism. There were many other people of many other nationalities in Nazi death camps, and they also have the right for compensations.

Stuart Eizenstat, an official spokesman for the Conference on Jewish Material Claims Against Germany, said after the country decided to make payments to victims of the Holocaust:

"We are seeing Germany's continued commitment to fulfill its historic obligation to Nazi victims. This ensures that Holocaust survivors, now in their final years, can be confident that we are endeavoring to help them live in dignity, after their early life was filled with indescribable tragedy and trauma. This is all the more impressive since it comes at a time of budget austerity in Germany."

One may say for sure that Germany still proves it to everyone that history is not just a word, but also action. The country still pays the price for its Nazi past and does its best to execute its moral duty to its people and history.