April was the month that gave the break for the parties to seek formulas and analyze proposals for the benefit of the majority mired in misery.  There were events of great significance such as the Peace march on the 9th of April, and the Forum on Political Participation, that gave massive support and input to the dialogue process, seeking a political solution to the long armed conflict that has rocked Colombia.

The march was a masvsie cry of the country for peace.

In late April, forum participants indicated a fundamental problem to be solved to clear the path to peace is an urgent need to establish a true democracy in Colombia.

More than for the guerrillas engaged in a peace process, what we demand of the State is full political participation for citizens, democracy, realizing the conviction of Simon Bolivar, that the sovereignty of the people is the only legitimate authority of nations .

Let people talk about the architecture of a new State for a scene of peace, a change of economic policies that for decades have victimized Colombians, a new military doctrine away from the National Security Doctrine that deceived so many for years that the military point their rifles against an "enemy within," their own people.

A democratic government does not pursue nor repress political choice. Educate citizens and military in the culture of tolerance.

"Apologize" is the chorus orchestrated the mass media who legitimately took up arms against institutional violence. It is perfidy to hide the real perpetrators. Forgiveness a State must ask for that has removed so many soulless human beings because of  their economic policy. For hunger and illiteracy, by the violent concentration of land, imposing war to defend narrow interests for the handover of sovereignty, by forced displacement, the massacres that bereaved humble homes of the missing, the persecuted and imprisoned, starving children, women and men feeling the crack on their backs of the whip of misery ...

As for FARC, with the help of the people, we have said that any error committed in the development of the conflict and armed resistance, the terror of the elites in power forced us and we are willing to revise based on reconciliation. But the perpetrators have no moral authority, and their courts to judge.

It will be placed in the hands of the National Constituent Assembly, the people who are the sovereign, the fundamental decisions that should be the peace treaty that Colombia requires, based on equity, democracy, freedom, dignity and sovereignty.

It is FARC that has removed the earth, from the horror story of plunder and death in this region.

No one can forget that the actions of FARC in defense of the peasants, took against those who carried out massacres like El Salado, Macayepo, Pichilín and Chengue.

The Colombian people mobilized for peace today should not tolerate procedures that do nothing and sabotage reconciliation efforts and progress in building an ostensible agreement.   It behooves us all to defend, with body and soul, a political solution to the social and armed conflict.

Here FARC is full of optimism and determination, with a team strengthened with new paintings, among which is another member of the Secretariat, the commander Pablo Catatumbo, bringing creativity to the purpose of peace. 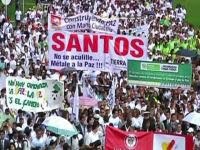